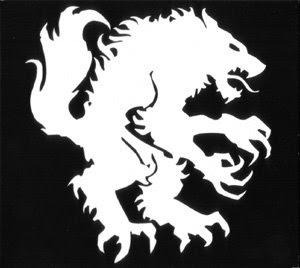 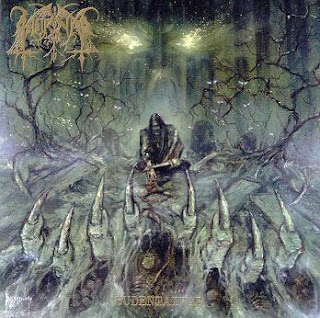 Sudentaival is the third full-length album from Horna. Released in March 2001 on Woodcut Records, this record sticks out like a sore thumb, when compared to the rest of the band's discography. For a band that has long been one of the pillars of the Finnish Black Metal scene, they made a severe misstep with this release. Thankfully, they learned from their mistakes, down the line.

Musically, this is not terribly far from the material that was heard on Kohti Yhdeksän Nousua. The band took several years to really find their own style, and this album is a product of that confusion. At this point, Shatraug's brilliant guitar melodies had not yet taken shape, so there is a mixture of generic ideas and some that demonstrate a shred of the potential that would soon be realized. The atmosphere of this L.P. is anything but dark or evil, which is a shift from the previous outing. While Haudankylmyyden Mailla was plagued by an overall sense of unoriginality, there was definitely an effort to pay home to the early-'90s Norwegian scene. Sudentaival seems to have been reaching out to more modern tastes, at the time. The overall approach sounds more in line with later Marduk, as the vocals and percussion dominate the sound. The blast beats seem to crush any attempt that the guitars make at creating a dark feeling.

The production is as much at fault for this atrocity as the songwriting. It sounds extremely fake and plastic, suffering from a sound that is similar to what one would expect from Abyss Studio. This gives off the impression of being horribly-produced Death Metal, moreso than having anything to do with Black Metal. The drums are way to high in the mix and the guitars are buried underneath everything else, when it should have been the other way around. I recall the confusion when I first put this CD in, as I thought I had been sent the wrong album. While the band's earlier efforts were all slightly too modern-sounding for my taste, this one crossed a line that no one can deny. The fact of the matter is that Sudentaival is not completely worthless, musically, but the horrible sound makes it nearly impossible to enjoy. Only during the slower sections are the sombre guitar melodies allowed to breathe. It is a shame as, with a more underground production and a little more work on the material, itself, this could have been a decent album.

Sudentaival is the one Horna record that I would not recommend. The few positives that it possesses are not really worth enduring the rest. Obviously, this did not have the greatest effect for the band members, either, as Nazgul left to start Satanic Warmaster and Shatraug began putting most of his energy into Sargeist, not long after this. After developing his style a bit more, with that project, the following Horna releases began to really take on an identity of their own. My advice would be to skip this and move on to Envaatnags Eflos Solf Esgantaavne.
Posted by Noctir at 8:48 PM 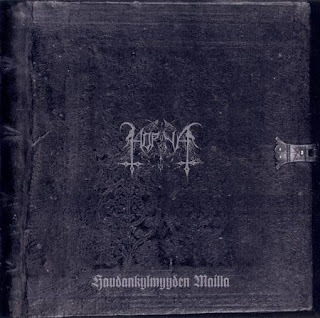 Horna's second full-length album, Haudankylmyyden Mailla, was released by Solistitium Records in 1999 and limited to 1500 copies. Though hailing from Finland, the music on here sounds very similar to the output of the Norwegian Black Metal bands, several years earlier. This record draws a lot of inspiration from early Darkthrone and Gorgoroth, in particular, thus it was well-received at a time when many of the bands that headed up the Second Wave had moved on to something else.
The album begins with a very strange intro, sounding like something from a horror movie (or, perhaps, a science fiction film). The feeling it conveys is rather sorrowful, however, so it does serve some purpose in putting the listener in a negative state of mind.

"Yhdeksän Yö" starts out with a bass line that carries on the feeling of dread, along with the sparse drum work. Moments later, the vocals come in, overdubbed with high and low, soon joined by the guitar. The mid-paced riff possesses a feeling of doom and works very well to create an atmosphere of hellish darkness. Nazgul gives on of the best performances of his career, sounding more intense than at any other point. After a few minutes, the music speeds up and one can hear the Gorgoroth influence, quite easily. The guitar melodies are very memorable, though the production makes it difficult to experience them in the proper manner, as the guitars seem to be buried in the mix. This becomes much more noticeable during the fast parts, as the drums really begin to have an oppressive effect on the rest. The riffs are gloomy and imbue the listener with images of a foggy graveyard, late at night.

The next song, "...Jeesuksen Verestä ", skips past all of the introductory riffs and gets right into the fast tremolo-picked melodies and blast beats, while the vocalist shrieks over the maelstrom of hatred and evil that is unfolding. This is a rather straightforward track, maintaining a fast pace throughout. Again, the only complaint is that the riffs are buried beneath the rest, though there are a couple parts where only the guitar remains, while the rest falls silent.

"Ylle Kuihtuneen Ajan Ajatusten" is a longer track that features a chaotic, Slayer-inspired lead solo, at the beginning. Unfortunately, it is so low in the mix that one hardly notices it. After a couple minutes of high-speed attack, the atmosphere darkens as the pace slows down. The riffs are reminiscent of Burzum, creating a miserable feeling. Nazgul's whispers add to the eerie vibe and a subtle bit of synth is also utilized. Though the riffs change, the pace remains rather slow for the remainder of the song, which never quite capitalizes on the brilliant middle section.
Things pick back up with "Kun Jumalan Sydän On Murskattu", which is another fast-paced song that hearkens back to early Darkthrone. As with the rest of the album, the guitar tone is reminiscent of Under a Funeral Moon and one can hear influences from that album, as well as Gorgoroth's Pentagram. The best riff of the whole song does not appear until near the end, and really could have been expanded upon. One gets the impression that some of this material was rushed.

"(Kaiken) Kristityn Kuolema" is, more or less, filler. It is another fast song with generic riffs and a bit of synth, at times. With a running time of over an hour, this track really could have been left off. Not every riff needs to be recorded and presented, especially when they are pointless as the ones here.

"Viimeinen Sielu Jumalan Valosta" is a mid-paced track that evokes a bit more or a morbid feeling, similar to the first song. In fact, it is a little too similar, at times, and could have been left on the shelf until it could be further developed.

The title track is one of the shortest on here, coming in at under four minutes, but features much better guitar melodies than the previous few songs. This one maintains a faster pace, though sort of relaxed when compared to other tracks on here. The drumming is a little overactive, at times, taking away from the riffs.

"Hymni Tuomiopäivänä" starts out with a frenetic tempo and more overdubbed vocals, with high and low. This sort of thing is rather annoying in Black Metal and should be kept to a minimum. The music is inconsistent, and includes some thrash riffs that do not fit in very well, along with mid-paced riffs that go nowhere. This one makes at least three tracks that are pure filler.

"Peikkomaille" is another song that sounds under-developed and a little too derivative of the Norwegian bands, without enough original thought put into the songwriting and arrangement. It is not terrible, but seems as if not enough time went into it, prior to the album being recorded.

The nine-minute track, "Epilogi", is utterly worthless and does not even add to the atmosphere of the record. This one is nothing more than filler, as well. That seems to be the trend with this album.

"Kunnia Saatanalle" is the final song and, while not terribly superior to the rest, it maintains a consistent feel and features some really decent guitar melodies. At just under three minutes, there is hardly enough time for it to get boring, which may work to its benefit. The overdubbed vocals are out of place, but the solid riffs make up for it.

While Haudankylmyyden Mailla should appeal to most Horna fans, it really would have been better off if it had been released as an E.P. Several of the songs are either filler or just a little less developed than they should have been. That said, even at its worst, this is not a bad album. It just fails to realize the potential that it hints at. Anyone into raw Black Metal in the Norwegian style should pick this up.
Posted by Noctir at 8:35 PM