Drowning the Light - An Alignment of Dead Stars (2009) 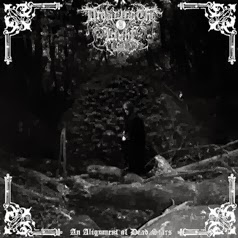 Drowning the Light first came to my attention with their contribution to the split with Mütiilation and Satanic Warmaster. The song was horrible and uninspired. As well, the band name seemed more suited for some kind of mainstream music. In the end, I wrote the band off as yet another modern project that was not worth listening to. The fact that they kept churning out albums, sometimes multiple full-lengths in a single year, reeked of low quality. Still, the name kept popping up and curiosity got the better of me. With so many releases in such a short span of time, I wondered if they continued down the path of terrible mediocrity, or if some sort of skill had developed. I borrowed a copy of their 2009 effort, An Alignment of Dead Stars, and gave the band another chance.

Without having heard any of the other albums, it is difficult to really comment on how the band has progressed, other than to compare it to the atrocious song from the Dark Hymns split. With that in mind, it can easily be said that the material on An Alignment of Dead Stars shows improvement with regard to the songwriting and the overall sound. The recording is dominated by tremolo melodies that are clear and, in most cases, do well to convey some kind of feeling. There is a somewhat melancholy vibe present, often accentuated by vocals that are reminiscent of Meyhna'ch. There is a definite over-reliance on keyboards and the music would have benefited from removing this element, completely. With some songs featuring clean guitar bits, the synth only waters things down even more, coming off as kind of cheesy. Be sure, this is not the type of Black Metal that has any aspirations to create a dark and hellish atmosphere, whatsoever. Some of the ideas are weak and should have been omitted, especially considering a running time of over an hour. That is fine when the compositions are strong and the music warrants it, but this really feels like it drags at certain points, and lacks an overall sense of consistency. While "The Cult of Shadows" and "Crippled Lies and a Fallen Prophet" do well in creating a bleak and miserable sound, a track like "Drinking The Sacrament Of Eternity (Revenge of the Impaler)" is much too upbeat and is clearly out of place. The structure of the songs is more dynamic than one might imagine, upon first listen, with various changes in drumming and riffs. At no point does this become as minimalist as the likes of Burzum or Darkthrone, two bands that seem to have served as an influence to this outfit (either directly or indirectly).

The music here is the sort of Black Metal that is underproduced by modern standards, but still lacks the edge that truly raw albums of the past possessed. Similar to Satanic Warmaster's Opferblut, the sound is stripped-down yet still rather smooth and easy to digest. The guitars are thin, but lack the razor-sharp quality of the classics that Drowning the Light have obviously looked to for inspiration. The vocals have a noticeable echo effect, as if recorded in a small closet, with a somewhat unnatural distortion at times. Still, the performance is worthwhile and adds to the music. The only real problem with the production is that the keyboards are too high in the mix, as well as the clean guitars. This takes away from the impact of the music and gives it a soft feeling.

Despite their shortcomings, Drowning the Light does a fairly adequate job of keeping up the traditions of the Second Wave Black Metal bands and never strays from this path. There is nothing exceptional about An Alignment of Dead Stars, but it may be worth listening to if you don't expect a whole lot from the bands that you listen to. It certainly has its moments, here and there, but it is rather average at best and only includes two or three songs that might have you returning for repeated listens. You are better off with a band like Clandestine Blaze.
Posted by Noctir at 11:58 PM