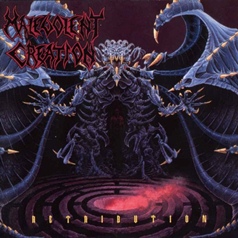 Malevolent Creation's sophomore effort, Retribution, was released in April 1992. By this point, Death Metal had exploded in such a manner that far too many bands were overflowing into the scene, most of them just incredibly mediocre. I recall hearing this band's name mentioned along the likes of Death, Obituary, Morbid Angel, Deicide and so on, all those years ago. This album, in particular, received high praise every time. Yet, when I got my hands on the cassette version of this album, it just fell flat.

The majority of the music here is quite dull and pointless. The Ten Commandments didn't feature much that was worth remembering, outside of the intense "Premature Burial". However, Retribution is an even more tedious listening chore. One of the things that differentiates Metal from simple Rock music has always been the emphasis placed on the riffs, generally with most bands having two guitarists. Nonetheless, neither Rob Barrett nor Phil Fasciania are the stars of this production. Neither is Brett Hoffmann (whose voice is fairly good but still displays no talent for making the vocals properly fit the music). No, the central figure of Malevolent Creation's second L.P. is the drummer, Alex Marquez.

This entire album is ruined because of the immensely overactive percussion. Death Metal is supposed to create a dark atmosphere; instead, Retribution offers useless groove riffs and breakdowns and criminal overuse of double bass that undermines most of the very few decent riffs that did manage to slip onto this record. Tracks like "The Coldest Survive", "Mindlocked" and "Iced" are a bit more primitive and straightforward than most of the rest, certainly the best parts of this album, yet the drums still do their best to spoil things as much as possible.

Of course, the list of complaints could not be complete without mentioning the absolutely atrocious Morrisound production job. This possesses the same generic, sterile sound as almost every other album recorded there during this period. To hear a random snippet from Retribution, without vocals, one would be hard-pressed to correctly identify the band. With the likes of Obituary, Death, Pestilence, Napalm Death and others all recording at the same studio and having their works wrecked by incompetent hands of Scott Burns, it all just blends together. Coupled with the fact that their songwriting is sub-par, it's no surprise that Malevolent Creation never managed to reach the same heights as some of their peers.

Many cite Stillborn as the point when Malevolent Creation proved their ineptitude, but it was already on full display, here. Death Metal is not supposed to be driven forward by the percussion, with the guitars taking on a supporting role. Retribution might be best used as a gateway album to gently lure Pantera fans into harder music, but it is entirely worthless to those seeking pure Death Metal. Avoid this garbage.
Posted by Noctir at 12:50 PM 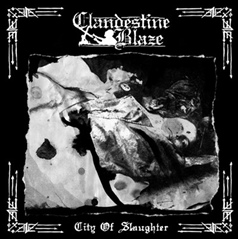 Clandestine Blaze has for several years been one of the most reliable Black Metal bands of the modern era. Never the greatest, but always able to deliver consistent albums that uphold the traditions of decades past. In February 2017, Mikko returned with his ninth full-length album, City of Slaughter.

For the most part, this L.P. offers precisely what one would expect from Clandestine Blaze. Stylistically, there is no change from the previous records, which is a good thing. In general, the only thing that Mikko really 'experiments' with has to be the production, which often takes a few listens to get acclimated to some of his more peculiar choices. The guitars possess a rathe favourable tone, maintaining sort of a sharp and rusty sound. As with Harmony of Struggle and New Golgotha Rising, the drums can be distracting at times, mostly due to the volume of the snare. Otherwise, there are no real complaints to be made.

Some of the songwriting can be described as, well, less-than-grim. "Remembrance of a Ruin" was an odd pick to open the album, with the more relaxed pace and the slightly off-putting backing vocals reminiscent of "Culling Species" from the previous L.P. Things pick up with "The Voice of Our Mythical Past", a faster song with the typical tremolo picking and memorable melodies that Clandestine Blaze has long been known for. "Circle of Vultures" utilizes more of this, though interspersed with mellow sections with sort of a plodding double-bass carrying things forward. Both of these songs feature some of the best riffs on the album, though. "Prelude of Slaughter" is a non-essential track, merely consisting of some synth and backward vocals, basically an interlude that goes a bit longer than it should.

It leads into the centerpiece of the record, "Return into the City of Slaughter", which is a lengthy song that sounds like something from Darkthrone's Panzerfaust, offering up a great deal of Celtic Frost worship. There are brief passages that add a sense of morbidity to the track, as well as sparse use of eerie background effects. The song is structured well and builds up a sense of tension as it goes along, with even the vocals becoming more intense. Whereas some of Mikko's forays into Celtic Frost territory have been hit and miss, this time he makes good use of Tom Warrior's style of riffing, mixing with his own style of songwriting, to create something epic and memorable.

This is followed by the more straightforward and primitive "Archeopsychic Fear" and "Century of Fire". Both are characterized by grim vocals, somewhat mournful tremolo melodies and fast-paced drums, though the latter does fall off the rails around the middle. Suddenly, things get rather calm and the drums become a little overactive, playing some ill-placed catchy beat that is just really off-putting. It reappears a minute or so later, which is so near to the end of the album as to leave a lasting impression of annoyance, at least to my ears.

Much like New Golgotha Rising, City of Slaughter is a rather decent record, overall. Despite beginning and ending with the weakest tracks (and the only two that I'd consider to be flawed), the rest of the material delivers a solid dose of Finnish Black Metal. While not necessarily up to the quality of Harmony of Struggle, it's certainly worth picking up for fans of Clandestine Blaze.
Posted by Noctir at 11:09 AM