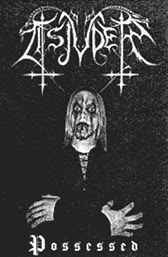 Tsjuder is one of the later bands to emerge from the Norwegian Black Metal scene, having nothing to do with the earlier wave of better-known bands. Their 1996 demo, Possessed, demonstrates precisely why it took so long for them to manage to record a proper full-length or to gain any amount of notoriety at all.

The best thing going for this demo is the necro, garage-quality, sound. This is one case of the raw production helping to mask the weaknesses of a band. As well, it is useful for burying various passages of double bass drumming, which would have sounded awful, otherwise.

Behind all of the fuzz and static is a band that has no clear vision for what they want to create. The songwriting is painfully average, at best, as Tsjuder do nothing but imitate the bands that came before them. They add nothing unique to differentiate themselves from the rest of the hordes that jumped on the Black Metal bandwagon around this time. In itself, that would be no big deal, but the compositions are just so mediocre. Despite the raw sound, the riffs on this demo are never very dark or threatening or evil. There are hints of atmosphere, from time to time, as Draugluin tries his best to channel the likes of Varg Vikernes or Infernus, but the sub-par arrangements leave most of the tracks dead in the water.

Possessed is the work of a tenth-rate Gorgoroth clone with bits of Emperor thrown in. Even Nag's vocals sound like a weak impersonation of Hat. Everything about this is average, and that is being generous. That said, this is probably the best thing that Tsjuder ever released. This is not a horrible demo, and can be enjoyed on some level, but it offers absolutely nothing that had not already been heard a thousand times, even by late 1996.
Posted by Noctir at 10:38 AM 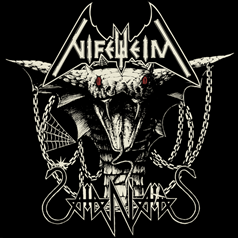 Nifelheim is a band that, seemingly, values playing live more than spending time in the studio. Thus, fans are tortured in-between releases, as they become more and more rare. The wait from Servants of Darkness until Envoy of Lucifer was hardly bearable, but ultimately rewarding. Since then, another seven years has passed and still no full-length. However, in December 2014, a special E.P. was released, available only at live shows.

Titled Satanatas, this mini-album features three tracks of uncompromising and old school Black Metal, as it should be. No more forced to look to the likes of Mordant or Pest, the trademark sound of Nifelheim triumphantly seizes the consciousness of the listener with "From Hell's Vast Plains". There is a sense of familiarity in certain parts, reminiscent of "Infernal Flame of Destruction", though soon taking on an identity of its own. The songwriting skills of Tyrant and Hellbutcher cannot be praised enough, somehow managing to compose mini-epics all while maintaining an ugly and primitive feeling.

"I rise in flames
from Hell's vast plains
to burn...
til nothing will remain"

One noticeable difference between Satanatas and Envoy of Lucifer is that the production is not quite as clear, sounding more like the previous releases. This suits the pure 80's vibe of the compositions, particularly "Bestial Rites". This song really hearkens back to early Bathory, like a more sinister and possessed take of The Return... There is a subtle gloom to this track that darkens the atmosphere all the more. As always, utterly hellish solo work remains a key component of Nifelheim's songwriting and is very effective.

These guys are truly remarkable in their ability to craft excellent songs, never sacrificing the purity of the music and still being able to make each track stand on its own and sound distinct and original. "Praise Lord Satan" is the longest of the three, clocking in at just four and a half minutes, and is instantly memorable after just one listen. It is amazing how Nifelheim is able to sound so old school and so unique, both at the same time, never falling into the trap of merely coming off as some kind of 'retro act'.

The duration of Satanatas is less than twelve minutes, and yet this is some of the purest and most genuine Black Metal that has been released in several years. Though many false bands claim that the black flame burns within them, Nifelheim need claim nothing. There music proves that they are, and always have been, among the few that are actually toiling away in an effort to keep hell's fires burning. Seek out this essential recording however you must.
Posted by Noctir at 9:55 AM 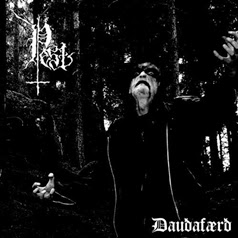 More often than not, bands will record their best and most inspired material early on in their careers, only to degenerate over time and to become irrelevant. However, there are times when the musicians go the opposite direction and actually get their acts together with time. In the case of the Swedish band Pest, they had done nothing of note for some years, other than release a string of unimpressive and mediocre Darkthrone worship. Yet, in 2004, they surprised many with the brilliant Dauðafærð E.P.

This release consists of a single track that stretches over twenty minutes. Based on their past, one would think that Necro and Equimanthorn were unsuited for such a task, but they managed to put together a monumental piece of Black Metal. "Lífit es dauðafærð" sounds as if the band had put their Darkthrone records aside for a while, instead preferring to listen to the classic works of Burzum. The slow build-up is reminiscent of "Det Som En Gang Var", and some of the slower riffs also sound very much influenced by this track. The vocals, though, are far from the tortured screams of Varg Vikernes. Necro's voice sounds utterly filled with hate and surely the old Norse lyrics help with this harsh feeling. Throughout the song, more primitive riffs alternate with bitter cold tremolo melodies that come together to create a dark and frozen atmosphere. Finally, the production of a Pest album really works well with the material, being clear enough to hear all that is going on but still allowing for a raw edge. Despite its length, "Lífit es dauðafærð" never becomes tedious or repetitive, as there are several tempo changes. This is the sort of music that would be really fitting to accompany one while wandering through a frozen wasteland, littered with corpses, on the way toward some endless dark forest where the chains of mortality shall soon be broken forever. Therein lies one of the strongest qualities of the song, that it is able to take the listener beyond their surroundings and on a journey into darkness. As it progresses, a sombre feeling begins to emerge as the cold blade caresses your flesh. The knife will have the last word, and the snow-covered earth shall drink your blood...

Dauðafærð is an epic, dark and majestic offering that is about as essential as any post-90's release can be. Rather than purely mimic their main influence, as they had done on earlier albums, Pest used it as a foundation on which to create some truly impressive Black Metal. The sole track here is dynamic, engaging and never bores, whatsoever. It is dripping with a cold and dark atmosphere and exudes the sort of passion that the band's previous output absolutely lacked. The strange thing is that, following such genius, the band went on to release another mediocre album that seemed to have no connection with this, at all. Regardless, this E.P. is highly recommended.
Posted by Noctir at 12:35 AM 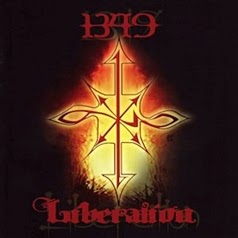 1349 appears to be one of the more popular bands to emerge from Norway in recent years. The reason for this is quite unknown. One listen to their debut effort, 2003's Liberation, is proof enough that the fires of old school Black Metal have truly been extinguished in Norway. No amount of well-known musicians or big labels can make up for lack of quality.

One word can sum up everything that is wrong with this album: modern. Here one can find a mixture of influences that are forced together, awkwardly, with no real direction and a total lack of focus. So much of the material is played at hyper-speed for no other reason than to be fast. Despite the high tempo, there is absolutely no sense of aggression or urgency to these parts. Worse still, the drumming dominates the entire album. Frost's performance here is completely over-the-top and just a masturbatory display of technical skill with no thought to what would best benefit the compositions. To make matters more unbearable, his overactive percussion is far too high in the mix and distracts from the rest.

The songwriting is not utterly terrible, though mostly generic. None of the guitar melodies are given any real time to play out or to breathe, shifting from one pointless riff to the next. There is absolutely no atmosphere to be found on this album. One can detect bits of old school influences, which would be a good thing if not for the fact that they float around as fragments of what once was, in a sea of modernity. The best song on here is a cover of Mayhem's "Buried by Time and Dust", and they completely butcher it and render it lifeless and bereft of the morbid feeling possessed by the original.

Liberation is a good example of modern 'extreme metal'. The original material clocks in around thirty-five minutes and it must not have taken much longer than that to write this simplistic nonsense. 1349 fail to create an atmosphere of darkness or to convey any evil feeling, whatsoever. This is just more watered-down, easy-to-digest kiddie trash, masquerading as Black Metal. It requires more than fast playing, spikes and corpse paint to be Black Metal, and these guys really missed the mark. Avoid this.
Posted by Noctir at 11:18 PM 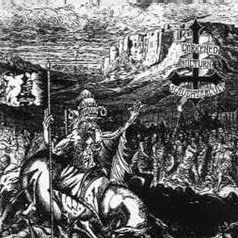 Over the last several years, and particularly during my stay in Berlin, it has been difficult to avoid hearing about the German Black Metal band known as Darkened Nocturn Slaughtercult. With such an over-the-top name, it would be wise to make sure that the band is able to deliver. Their first official release came in early 1999, in the form of an E.P. titled The Pest Called Humanity.

Upon first listen, it is really difficult to understand why this band is so hyped, as the songwriting is rather mundane. The extremely poor production does it no favours. In particular, the hollow drum sound is distracting and irritating. The riffs lack any feeling of darkness and come across as generic and pointless. The vocals are another big problem; as misogynistic as it may sound, female vocals have no place in Metal, especially Black Metal. That goes for clean singing or these pitiful attempts at harsh vocals. No matter how many people try to tell me, "oh, this one is different, she's really good", I can always pick out weak female voices and they never suit this music properly.

The Pest Called Humanity is below-average and nothing more than a mesh of random influences, poorly executed. With such a weak scene, compared to their northern brethren, it is not surprising that Germans would cling onto anything that might seem passable, but Darkened Nocturn Slaughtercult simply fails to live up to all of the underground hype. If you want to hear real German Black Metal, seek out Moonblood or Katharsis. Avoid this novelty act.
Posted by Noctir at 1:34 PM