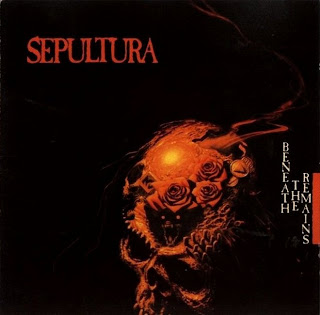 Following 1987's Schizophrenia, Max Cavalera traveled to the U.S. and made the contacts that would eventually get Sepultura a record deal outside of their native Brazil. This was quite an accomplishment for the band, though it would mark the beginning of their decline, creatively speaking. With the new recording contract came a larger budget and a useless producer by the name of Scott Burns. While the album was still recorded in Brazil, the tapes were taken back and mixed at Morrisound. Released in September 1989, Beneath the Remains signaled the band's arrival to the worldwide stage, with better distribution, tours, merchandise. etc. They had finally solidified their sound and, unfortunately, settled for an identity that was a bit more watered-down and generic than the quality of their previous work seemed to promise.

Beneath the Remains was the first Sepultura album that I heard, listening to it at a friend's house one night. It was right up my alley, and made enough of an impression on me that I decided to seek out some of their albums, though I acquired Morbid Visions a short time before getting my own copy of this. Eventually, I picked this up as well and gave it countless listens. I never felt that it was a bad record, but maybe somewhat overrated and definitely a step down from their earlier efforts.

Musically, this album is very solid. Taking their cue from Metallica, surely, it begins with an acoustic intro. The music that follows features a variety of different tempos, though mostly fast. It's actually very intense and many of the riffs would have fit well on Schizophrenia. The thing is that the production is too clean, here. As a result, some of the potential atmosphere is lost. I think that the great riffs would have managed to come through even with a more raw and primitive sound, so the overdone production was rather unnecessary. Still, it is fairly consistent for the Thrash Metal albums of the time, being somewhat similar to releases like South of Heaven, Agent Orange, and so on. By comparison, Beneath the Remains is actually heavier than many contemporary releases. While the overly clean sound is a bit of a problem, one of the primary detriments is the presence of so many catchy riffs. This may work to get the listener's attention and even lead to repeated plays but, eventually, these riffs and sections get a little boring. Songs like "Inner Self" seemed to jump out at me, back in high school, but I can't sit through the entire song these days. It's too boring and stale. This band isn't alone in going to the well of catchy riffs too often, so one cannot blame them too much. In the end, the good riffs make up for that. Either way, I maintain that the album would have sounded much better with a rougher production job.

As for the vocals, Max had really streamlined his sound by this point, similar to Mille Petrozza and Tom Angelripper. They're still harsh, possibly enough so for this to be considered Death/Thrash (along with some of the riffs and drumming patterns), but they've lost every bit of evil and darkness that they once possessed. Comparing the style found on this album to that of Morbid Visions, it is easy to tell that a lot of the genuine feeling has been lost.

And therein lies the main problem with Beneath the Remains; it's not a horrible record. It simply doesn't live up the the quality of the first two, and represents a more streamlined approach that was geared toward a mass audience, rather than the primitive and dark feeling conveyed in the past. It's a solid Thrash album, and leagues beyond what most of their influences were doing by this time, but it's not Sepultura's greatest accomplishment. However, it is superior to anything that came after it, so take that for what it's worth.

Highlights include "Lobotomy", "Primitive Future" and the solo in "Mass Hypnosis".
Posted by Noctir at 9:16 PM 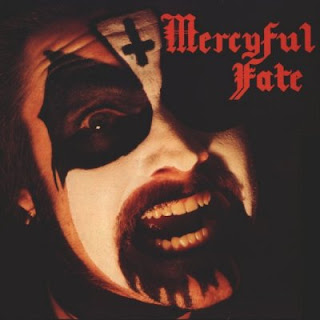 In December 1983, Music For Nations released the Black Masses single, by Mercyful Fate. This was not too long after their full-length debut, Melissa. In essence, this was more of a collector's item, as the main song was a revamped track from their demo days.

The original version of "Black Masses" was titled "You Asked For It" and appeared on the first Mercyful Fate demo in 1981. It's difficult to compare them, as the original really doesn't feel like it belongs with the rest of the band's material, quite honestly. "Black Masses" features different lyrics, though the vocal arrangements are very similar. The most notable change is during the chorus. Hearing the demo version first, it took a little time to get used to the newer recording, but it is actually more suitable for Mercyful Fate, in this incarnation. Still, there's something about the atmosphere that is more light than dark, despite their efforts to alter it. It wouldn't have been entirely out of place if they had chosen to include it on Melissa, but I'm thankful that they did not do so. It's a good song, but the inferior nature of the previous version cannot be fully erased.

The B-side for this single is a different version of "Black Funeral", a song that appeared on the debut. It sounds like a demo or rehearsal, being more raw and featuring none of the vocal layering that was on the album. It comes across as rather flat and dull, by comparison.

Black Masses is interesting enough as a collector's item, but not exactly essential. It's superior to everything they pu tout after reuniting, but not worth going to great lengths to obtain.
Posted by Noctir at 9:48 PM