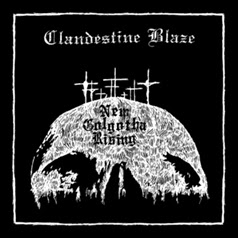 Two years have passed since the last Clandestine Blaze album, and very little of worth has emerged from the realm of Black Metal in that time. So many mediocre, forgettable, plastic, fake and worthless recordings have polluted the scene, so it is extremely refreshing that Mikko has returned with another dose of pure and uncompromising Black Metal, in the form of New Golgotha Rising.

Clandestine Blaze has always managed to maintain the traditions of Black Metal while also adding something to it, proving that one needs not countless bells and whistles to dress up the music if a true understanding of said music is possessed in the first place. While only clocking in at around thirty-eight minutes, New Golgotha Rising feels far more immense and meaningful than one might expect. The songwriting is rather stripped-down and primitive, but is not really minimalist in the same sense as Transilvanian Hunger or the old Branikald material. Though the songs are pretty straightforward, there are enough variations in the riffing and also subtle changes in the percussion that give a lively and often aggressive feeling to the songs. As usual, the compositions center around sombre and menacing tremolo melodies, with a good mix of old school riffing thrown in. One can hear definite influences from the early albums of Darkthrone and Burzum, which have long been key components to the foundation of this band. The latter begins to bleed through in the second song, "Fractured Skull", which possesses an ominous feeling that hearkens back to tracks like "Praising the Self" from Fist of the Northern Destroyer.

One thing that Clandestine Blaze has always been capable of is creating a dark and unsettling atmosphere. It is not just that Mikko knows which notes to play, but he knows why they need to be played and by which methods to best get the most out of each one. The opening riffs of "Consumed By Flames" really demonstrate this, reminiscent of Darkthrone's "Where Cold Winds Blow". Bands such as Satanic Warmaster often displayed enough technical skill to closely imitate the old bands, but always failed to give the songs any true depth or to imbue the listener with a sense of dread. Clandestine Blaze is no shallow copy.

Often, throughout the career of this band, Mikko has tried his hand at incorporating Celtic Frost influences, with varying degrees of success. It has only been in recent years that he has managed to really work these bits into the rest, without it sounding disjointed. In the case of the title track, Fenriz would be very proud of the way Tom Warrior's riffing style has been utilized to create something dark and evil, rather than boring and plodding. In fact, this almost pays homage to Hellhammer's "Triumph of Death" with the tortured screams and genuinely plague-infected feeling of the riffs.

The only real weak point of this record comes with "Culling the Species". The choice of a cleaner vocal approach is quite odd and produces a strange effect. The music is not bad, but the vocals are rather awkward and take some getting used to. I would recommend just skipping it, but some of the riffs are really worth hearing.

The gloomy and macabre feeling deepens with the final two tracks, featuring a lot of mid-paced and funereal riffs. "Passage to New Creed" features somewhat of a false-finish, perhaps a nod to classic Bathory. "Final Hours of Sacrifice" is the lengthiest song on here and offers absolutely no hope, no refuge and not a trace of light breaks through this inescapable darkness. The slow intro is a harbinger of things to come, while the main tremolo riffs wear you down and cut though you with an frigid sense of melancholy that will haunt long after the record has ended.

There's nothing plastic or disingenuous about this. The production is appropriately raw, but retaining enough clarity for everything to be heard. As for the songwriting, there is nothing to complain about. In an age where so many false bands wrongly whore out the aesthetics of Black Metal and receive undeserved praise, Clandestine Blaze simply toils away in relative obscurity and continues to churn out worthwhile pieces of music that remain true to the essence of Black Metal and do well to keep the black flame burning through these darkest of times. New Golgotha Rising is very much recommended.
Posted by Noctir at 5:22 PM