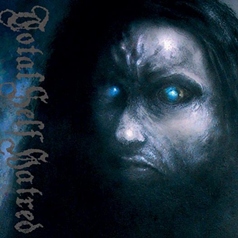 The first time that I heard the band name Totalselfhatred, I was rather disgusted. Without even hearing the music, I assumed that this was yet another boring and weak DSBM band with no substance, similar to the likes of Sterbend and Xasthur. It was only some time later that I discovered that the former vocalist of Horna, Corvus, was handling guitar and vocal duties for this band. Upon learning this, I decided to give the band a listen. Irritating band name or not, this is certainly worth hearing.

What one finds when exploring Totalselfhatred's 2008 full-length debut is something far more fascinating and meaningful than the aforementioned bands that are lumped into the same group. One of the most important differences is that the music actually evokes some kind of feeling and connects with the listener in a rather miserable manner. With bands such as Thergothon, Skepticism, Shape of Despair and Mortualia to its credit, one should not be surprised that this Finnish band actually succeeds in creating a bleak and hopeless atmosphere. One thing that sets this apart from the terrible masses of "suicidal" Black Metal bands is that Totalselfhatred is not just pure misery in sonic form; there is a good amount of aggression, even if it is turned inward, to be found on this album. The songwriting is never dull or pointless. It is actually a lot more dynamic than one might expect, featuring a mixture of fast and slow tempos, contrasting the lifeless and hopeless moments with those of pure rage and insufferable hatred for this existence as a whole. Corvus brought this kind of feeling to some of the Horna material, over the years, and he excels in finding suitable ways to compliment the music with his raspy and maniacal screams.

The production is rather clear and smooth, when compared to other Finnish bands like Horna or Baptism. However, in this case, it is somewhat appropriate. There is a lot going on, with the addition of acoustic guitar bits, keyboards and the woeful bass lines that put more emphasis on the melancholic guitar melodies. At times, one is really more reminded of bands like Katatonia and Paradise Lost, with the various guitar passages. Even some of the clean vocals from "Mighty Black Dimensions" hearken back to Icon. To call this pure Black Metal, even of the depressive sort, would be kind of erroneous. There are definitely other influences at work here. The riffing is so varied that it would be more accurate to consider this a mixture of Black and Doom, really. With this in mind, it makes more sense that the guitars have such a thicker and fuller sound that what most would imagine a Black Metal album to possess. Distorted as they are, they still allow enough clarity for the listener to really bathe in the agonizing and hateful vibes that dominate this record.

Totalselfhatred is the sort of album that is not exactly safe for all. In particular, if you are already in a rather dark place, the mournful atmosphere that this creates is likely to intensify the misery. Songs such as "Enlightment" and "Ruoska", in particular, are drenched in grief and pitch-black feeling. In a sense, it is as if you cannot breathe properly. During these moments, you can sense the utter hopelessness of existence and it becomes clear that the only answer is to put an end to it. The songwriting is rather consistent, though the first two songs stand out from the rest. However, one really does not seem to belong. "Spirituelles Equilibrium" kind of interrupts the flow of the album, as it includes more intense riffs that seem more befitting of Death Metal, really. Otherwise, this album gradually degenerates and drags you into a dreary psychosis, where it becomes completely logical to consider taking a sharp blade and slicing your own throat.

In the end, it is likely that most of us should follow this path, rather than existing just for the sake of not being dead or trying to cover the misery with one meaningless thing or another. This world is an empty and hellish place and we were all damned at birth. The masses will tell you that only a coward would seek death instead of continuing on with this pointless battle, but the truth is that those people are too afraid to take that final step and want as much company in this hell as they can have, since it somehow eases their suffering to share it with several billion others. Real courage is casting aside the instinct for self-preservation and doing what needs to be done, instead of giving in to false hopes and sticking around waiting for some kind of miracle. Perhaps, this album is the soundtrack for some to summon the courage to do this.
Posted by Noctir at 10:55 AM