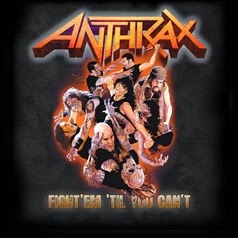 Fight 'Em 'Til You Can't is the first single from Worship Music, and was released by Megaforce Records in June 1991. Or, rather, it should have been released about twenty years earlier than it was. Instead, it emerged in the summer of 2011 and marked the first new song to be recorded with vocalist Joey Belladonna in a couple decades.

Following Belladonna's untimely departure in 1992, Anthrax struggled with a severe identity crisis. Traces of their sound remained, early on, as one could vaguely connect some parts of Sound of White Noise with its predecessor, Persistence of Time. The first album of the John Bush era had its moments, but ultimately it was a step in the wrong direction. Rosenfeld led his troops through the rest of the 90's and beyond, trying desperately to seem relevant and dumbing themselves down in an attempt to follow any trend that they thought might bring them a few more dollars. The experiments with being Pantera-lite, or even joining the Nu-Metal trend, were complete failures and it seemed as it Anthrax was finished.

Somehow, they reconciled with Joey and managed to get themselves into the studio for the first time in several years and the results were far better than they had any right to be. "Fight 'Em 'Til You Can't" is not without its flaws. Obviously, it is over-produced and has a rather plastic sound. As well, the chorus melodies reek of modernity. However, the bulk of the song feels like a return to the days of Persistence of Time, which is a good thing. In fact, one might say that it is a bit of rehashing of the past, but it is still enjoyable for fans of the old days. The main reason for this is the vocal performance by Belladonna. Two decades later and he still possesses the same talent and ability as when they last recorded together. His voice really makes this work. Even the lyrics hearken back to the band's classic days, dealing with the topic of a zombie apocalypse, while managing to avoid the goofiness that that often plagued them.

This single is by no means essential, but it is recommended for anyone that held even the slightest hopes for this band to again record something enjoyable. While it may be more of a nostalgia trip, it should be a satisfying listen for those that have been sickened by nearly everything this band has done since 1990.
Posted by Noctir at 9:37 AM