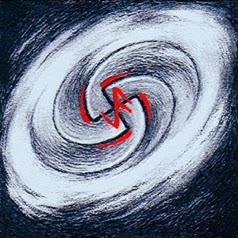 Released in 2000, Струн Натянутых Вдохновенья Сталь was another album from Branikald's so-called dark period. Without even a label to support the band, Kaldrad would not be deterred and continued making music. While his better days may have been behind him, this is still a fairly solid effort.

The production lacks the cold sound of the earlier works, with the guitars taking on a somewhat warmer sound than before. The guitar tone possesses no rough edge, sounding kind of flat instead. It is still rather raw, though not quite to garage-demo quality. There are some rough spots, here and there, where the volume drops for a second or so.

The arrangement makes a little more sense, this time around, putting the instrumentals at the beginning and end of the album. After the intro track, "Жгучи Меда Глотки" offers up precisely what one would expect from a Branikald record, being ten minutes of minimalist Black Metal. The tremolo riffs and primitive drumming serve as a backdrop for Kaldrad's ever-hoarse vocals. While generally very straight-forward, he also has the tendency to sacrifice structure in favour or allowing the guitars to flow where they will and to add an atmospheric sense to the music. Those looking for something a bit more standard are likely to appreciate "Энергией Ansuz" and "Свастика", which features morose guitar melodies and a more aggressive approach to the percussion and vocals. The songs are very repetitive, with little variation throughout, but adhering to a strict path that allows for no deviations, in contrast to the first proper track on here. "Разитель Дух" is more mid-paced, still built upon fast-picked melodies but with slower drumming and sparse vocals. The atmosphere is a bit dreary, but not exactly melancholic. Somehow, as before, the riffs are solid but not as strong as they could be, thus the compositions feel that they are lacking something.

Though never one-dimensional, Branikald was for a long time one of the most consistent bands in Black Metal. Very few musicians that were active in the scene in 1995 were still keeping true to this music even by 2000. Most of the bands that influenced Kaldrad had abandoned their styles for something else, but he proved very reliable if not terribly original. Oftentimes, that is more important and anyone that appreciates minimalist and under-produced Black Metal should certainly give Струн Натянутых Вдохновенья Сталь a listen.
Posted by Noctir at 3:09 AM