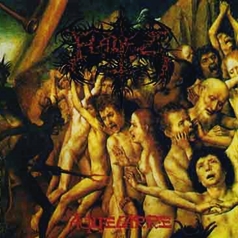 My knowledge of South American bands is mostly limited to the likes of Sarcofago, Sepultura, Vulcano, Holocausto, Pentagram, Masacre, Parabellum and so on. Beyond the mid-to-late 80s, I've never really found anything that impressed me. It was only very recently that someone turned me on to this heretofore undiscovered classic, the 1993 debut full-length from the Peruvian Black/Death Metal band, Hadez.

Aquelarre succeeds where so very many bands have failed, which is difficult to comprehend as one would imagine this is the main point of any Black or Death Metal band: creating an atmosphere of incomprehensible darkness and purest evil. Hadez manages to engulf the listener deep within an abyss of torment and infinite obscurity. From the horror theme that opens the album, which then becomes the main riff of "Human Extinction", a gloomy and demonic sound bleeds from the speakers. This album is just dripping with unrelenting evil. During some of the mid-paced sections, with the deeper vocals, I am reminded of Beherit's Drawing Down the Moon, which is not surprising as both bands likely had some of the same influences. However, Hadez has the added element of these absolutely tortured and desperate screams that help to give the record a truly hellish feeling. This contrast in voices conjures images of wretched, damned soul being tormented by the Infernal One, himself.

The biggest musical inspiration for Hadez seems to have been Sarcofago, as Aquelarre truly sounds like the successor to INRI, at times. Songs like "Nightmare" and "Christ's Death", in particular, come to mind. The songs utilize varied tempos, never becoming too monotonous and, while there are plenty of fast and chaotic riffs to be found here, the slower passages are often where the band really shines and manages to create a dark atmosphere. For example, a song like "Drunk with the Saint's Blood" just oozes undeniable malevolence, which is mostly the result of the slower, creeping riffs and the vocals that are possessed with blackest suffering. The eerie lead solo is a brilliant addition to this, as well. All of the aforementioned components, along with the intros, outros and sparse horror samples, come together perfectly to maintain a truly sinister aura.

As I am newly acquainted with this band, I cannot say for sure, but I get the impression that Aquelarre is not nearly as well-known as it should be. I can hardly believe that it has taken so many years for me to become aware of its existence, yet I'm always somewhat grateful that there are still hidden gems to be unearthed. Fans of Sarcofago, Beherit, Archgoat, etc. Should make haste in giving this a listen. In fact, anyone with an appreciation for truly dark Black/Death Metal needs to make this a priority. There's no filler, no downside, pretty much not a single negative thing to say about this. That said, it's not for the weak. There is nothing pretty about this album. With this recording, Hadez created something abysmal and hellish and this is absolutely recommended. Seek this out and listen to it immediately!
Posted by Noctir at 10:47 PM