Mütiilation - Destroy Your Life for Satan (2001) 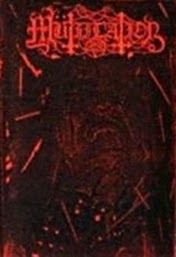 Released in early 2001, Destroy Your Life for Satan was the first offering of new Mütiilation material in several years. Though Remains of a Ruined, Dead, Cursed Soul was released in 1999, the recordings were from 1993 and 1996. During the years of silence, in which Meyhna'ch removed himself from the underground Black Metal scene, much had changed.

The first thing that one might notice, upon listening to this demo, is that it seems far removed from the band's classic material. Gone is the extremely raw and genuine feeling that characterized those old releases. Mütiilation had, sadly, come into the modern, digital age. For this reason alone, I had long avoided these albums and, even when I finally gave them a chance, my reviews were not so favourable. It is true that the production works against the music; however, to disregard these later works based on this would be quite unfortunate.

Of the five songs offered here, only two would remain exclusive to this demo. The re-recorded version of "Transylvania" is like a bridge to the past, and does well to maintain the feeling from the original, even if the sound is not as raw as one might like. The guitars still possess a decent amount of distortion and, on this demo, Meyhna'ch had not yet gone crazy with the vocal effects. The main thing working against this is the lack of a real drummer. However, the guitar melodies are strong enough that they consume your mind and it is there that Meyhna'ch's dark vision unfolds. He always had a talent for writing very morbidly unsettling riffs that capture the true essence of the darkness that rests within us all. Some of the guitar melodies in the title track and "Black Millenium" really connect to the old days, though this is not readily apparent when one is first attempting to digest the differences of the overall sound. His vocals, brilliantly, add to the bleak and hellish atmosphere. This comes through even better during the slower sections, such as the middle of "The Ugliness Inside". He sounds utterly possessed and ruined by the internal darkness that threatens to destroy each of us. His is the voice of a being that is hanging from the edge, somehow clinging to tiny shreds of mortality, tormented and corrupted. The Venom cover is somewhat interesting, and he does a good job in making it even more miserable and hideous, though it does not fully fit in with the rest of the material and may be somewhat of a novelty that wears off after a few listens.

Though the band had returned in a somewhat different form, Destroy Your Life for Satan is definitely worthy of Mütiilation and is another essential part of the band's discography. Though three of these songs appear on subsequent albums, these versions are different (despite what some might think) and are worth listening to. In fact, though they are very much similar, these recordings seem somehow better. Do not pass this up.
Posted by Noctir at 2:59 AM