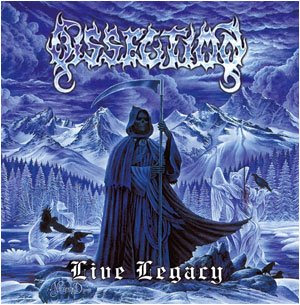 Live Legacy was released in the winter months of 2003 and features a live recording of Dissection's performance at Wacken, from 1997. It was originally released as Frozen in Wacken, as a bootleg in 1998. The sound is a lot better on this release, though it is missing one song ("Night's Blood") due to irreparable issues with the sound quality. This album served as a harbinger of doom, as it would re-establish Dissection's presence and build anticipation for new material that would follow, after Jon's release from prison the next year.
The cover art accurately depicts the atmosphere created by this live album, as it's freezing cold. The music of Dissection is incredibly powerful and this release is no different. The songs are executed, flawlessly, and the guitars possess the same razor-sharp, cold sound as on Storm of the Light's Bane. Jon's vocals possess a little reverb and it perfectly suits the music, giving a slightly more demonic feel. It is quite obvious that Dissection is a live band, fully capable of delivering their masterpieces in proper form, in a live setting. The performance is powerful and intense, and it's no secret why this is my favorite live album, ever. Even for those who don't usually appreciate live albums (a category I fall into) this is an essential release.
The songs are performed just as brilliantly as on the studio albums, with only slight differences, such as the ending of "Unhallowed" which seems to get very old school with the build-up and the brief solo that is added. A similar thing is done at the end of "The Somberlain", the final track. It is very enjoyable and adds to the song rather than detracting from it, definitely showing off the 80s metal roots of this band. Of course, this song retains all of the dark and melancholic atmosphere as the studio version, being one of the highlights of this album.
The only thing I could possibly complain about regarding Live Legacy is that it is too short. Being completely obsessed with Dissection, nothing less than a 6-disc set, featuring all of their songs and a couple dozen cover songs would be completely satisfying. Of course, surely it is a sign of an incredible band to always leave the listener wanting more. I highly recommend this album for any fan of Dissection. You may have heard all of these songs, on the proper albums, but you haven't heard them quite like this. They are just as fresh here as when they were originally recorded. This is an essential release and very much worth the effort to acquire.
Posted by Noctir at 12:03 PM 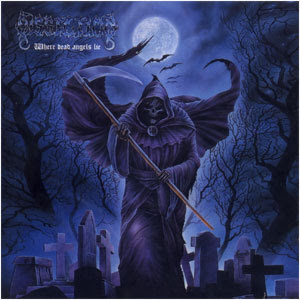 Where Dead Angels Lie is a classic E.P. released in April 1996, by the mighty Dissection. This has to rank alongside Haunting the Chapel as my favorite E.P. ever. The search for this particular release took a little longer than I'd have wished, but it was well worth the wait.
It begins with a demo version of "Where Dead Angels Lie". Where this differs from the studio recording is that it is much more raw and features a slower pace than on Storm of the Light's Bane. In some way, this only adds to the ominous and eerie atmosphere. Instead of ice cold razors, slicing through your skin, it feels more like rusted hammers, crushing your bones. The vocals are a little different as well, being a bit more Hellish and raw, aat times. It is interesting to hear how the song sounded in an earlier form, and to then compare it to what was released later on. Often, demo versions aren't very good and are more of a curiosity than something to actually enjoy. That's not the case here. This is quite essential, in my view.
The next song is a cover of Tormentor's "Elisabeth Bathory". The band does an excellent job capturing the feeling from Anno Domini, and Jon even does a good job emulating Attila's vocal approach. As much as I love Tormentor, this cover equals the original, at the very least. The execution here is perfect in every way.
This is followed by my one of my favorite songs on this E.P., a cover of Slayer's "The Antichrist". One can truly feel the passion that went into this and assume that the band has an extreme fondness for old Slayer. Everything is crisp and pulled off very well. Being an old Slayer fanatic, I can't put this over the original, but it's one of the best Slayer covers I've ever heard. It's quite an interesting and enjoyable listen.
"Feathers Fell" is similar to the version found on The Somberlain, though this contains whispered vocals. It creates a calm effect, though I prefer it without any vocals of any kind.
"Son of the Mourning" is next, and is a re-recorded version of an older Dissection song, from the Into Infinite Obscurity E.P. The vocals are pure Hell and add a lot of intensity to the song. The production is vastly superior to the earlier recording, though still fairly raw. It is short and goes directly for the throat, not wasting time with anything else. Next to "The Antichrist", this is probably the best song on here...well, with the exception of the title track.
The final song on here is the L.P. version of "Where Dead Angels Lie". This brilliant song has already been covered in my review for Storm of the Light's Bane. A true classic and an excellent choice for the E.P.
Most of these songs are available on other releases, these days, but I recommend any true Dissection fan to seek this out anyway, as it deserves to be appreciated as a separate release. One of the best E.P.s ever.
Posted by Noctir at 10:27 AM 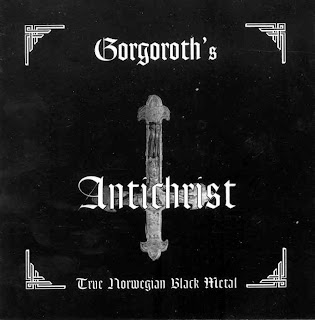 Antichrist is the second Gorgoroth album, released in 1995. This album is very much in the vein of its predecessor, Pentagram, while maintaining an identity of its own. This album introduces a new vocalist, Pest (of Obtained Enslavement), while also featuring Hat on some songs as well. Handling the drumming duties on this outing is Frost, of Satyricon, utilizing a more minimalist approach to suit the music.

It is difficult to process how one man can write so many brilliant guitar riffs, yet Infernus seems to do so with ease. His influences are not hard to discern, yet they come together in a distinctive style. Also, while creating raw Black Metal, Gorgoroth always maintain a high level of power in their compositions.

The album opens with a brief intro, "En Stram Lukt av Kristent Blod". This is not particularly noteworthy and adds very little to the album, really. The true beginning of the album is "Bergtrollets Hevn". This song shows the same type of melody as on Pentagram, with slight progression. Hat's vocals maintain the very raspy approach from the previous album, though seeming a little more in control. Frost employs some old school drum beats, in the beginning and end, unleashing double bass throughout. Following a couple verses, a short break leads the listener into a crushing acceleration, which will give way to the return of the opening riff at the end, accentuated by Hat's screams. The song ends with the sound of winter winds blowing across the desolate landscape.

The winds lead into one of the best riffs ever created, as the song "Gorgoroth" begins. This is, definitely, one of the highlights of the band's career, alongside "Maaneskyggens Slave". Beginning abruptly, the fast tremolo riffs and blastbeats are reminiscent of Transilvanian Hunger; the layers of guitar and bass work well to create a somber atmosphere. This song progresses narratively, building up climactic tension with every part towering over the previous one with a dramatic increase of passion. It starts out on an extremely high level already. A high-pitched, vibrant and humblingly epic lead hovers over crushing blastbeats, commanding attention on its own, and in a move only few bands can manage to pull off, lead and rhythm change places. The lead remains the same, but the instruments at lower pitch that previously only provided the simplistic, high-speed background take a lead role by morphing into a memorable, beautiful accentuated melody at moves into the foreground, amplifying the epic character of the opening part's atmosphere. After this introductory theme has reached the peak of its build-up, it is released into the triplet-beat that is all too common in Black Metal, but that only few bands can pull of as well as Gorgoroth do here. It is hard to describe how captivating the combination of rhythm, riff and vocal performance is, it is simply stunning. There is some variation in the form of drumless pieces of atmospheric build-up to enhance the emotional experience even more. The guitars are quite similar to early Mayhem ("Life Eternal") or Burzum, while the drum work is similar to old Bathory. A short guitar solo finishes the triplet-based part, and you can hear that this solo was put in merely for effect, to ease the listener into the final parts of this song, which then pre-climaxes in the kind of lead only Infernus could write, then when you thought you had reached the absolute highest point, it gets better, and even better after that. After the neck-breaking lead you had probably first mistaken for the climax, a second short solo a lot more beautiful than the last thrusts the emotional threshold even higher, and just seconds later, a brilliant part carried by clean, mournful vocals carries the song into the majesty of the night sky.
"Possessed (By Satan)" begins with a very old school feeling. A Celtic Frost influence is apparent, at first, then the song continues with more of a galloping drumbeat. The song speeds up, mid-way through, with memorable riffs, before returning to the previous theme. Pest's vocals also display a noticeable accent, which I haven't noticed in much o fhis other work. It adds to the feel, nicely.
"Heavens Fall" is an instrumental that would not have sounded out of place on Pentagram. Halfway through, the pace switches to an old Hellhammer/Celtic Frost rhythm, followed by a couple screams from Pest, before galloping toward the battlefield.
The final song, "Sorg", is another highlight of this album. The sound of thunder and rain, accompanied by bells, remind one of the song "Black Sabbath". This is a Black Metal funeral march. The atmosphere is one of sorrow and the vocals are sparse and suit the music well. Here, again, Hat utilizes clean vocals, sounding like a choir of the damned. The song is very slow-paced and melodic. It is like a dark journey through the cold gravelands. Despite being raw Black Metal, the production is quite clear, as on Pentagram. Some of the riffs, near the middle, are reminiscent of Black Sabbath, though not as obvious as Ophthalamia's debut. The last verse is again sung with clean and somber voice, and Hat's last note is made longer by a very strong reverb, left alone to fade away slowly, slowly... The silence is broken by more thunder and the sounds of the falling rain as this classic album fades to black...
Overall, there is little to complain about, regarding this release. It is a bit short, but accomplishes what it intended to within that time. It's not quite the monster that is Pentagram, but a worthy follow-up, nonetheless.
Posted by Noctir at 1:05 AM 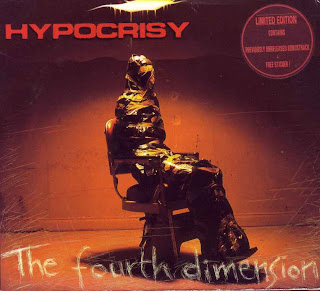