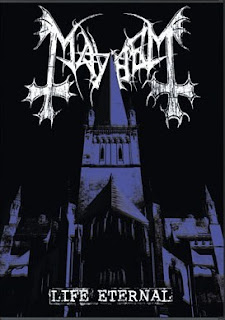 The story behind De Mysteriis Dom Sathanas often eclipses the actual musical achievement accomplished by the mighty Mayhem. Whether longtime fans or new to Black Metal entirely, it is quite likely that most people reading this know a bit of the history of this Norwegian band, or even a passing familiarity with the murder, suicide and church burnings that have become so much a part of Mayhem's legacy. Even while many will give a nod to the overall importance of this group, far too few will really get past all of the hype and sink their teeth into what is really a classic piece of Black Metal history. A lot of people dismiss De Mysteriis Dom Sathanas as merely an overrated product of the music media. Such creatures are truly ignorant and deserving of being burned alive for even approaching this music, while being so blind to true quality. For the rest of us that appreciate and hold this album in high regard, any small piece of the puzzle is worth tracking down, such as the From the Dark Past bootleg, for example. As time passes, more remnants of that distant time have been unearthed.

Life Eternal is an E.P. that was released just a couple years ago, consisting of material pulled from Attila's personal collection. The songs here are rough mixes of five of the tracks from Mayhem's debut full-length, in somewhat altered form. Far from an attempt at cashing in on the popularity of the band's old material, this seems more like an offering to the dedicated fans to have another piece of that special time before things fell apart, back in 1993. The liner notes include some photographs from the recording session, with one in particular being of interest as it features Euronymous, Varg Vikernes, Snorre Ruch and even Metalion of Slayer Mag fame. The cover art is also intriguing, as it offers a slightly different angle on the image that adorned the original album; quite fitting, as the music also offers a similar view of the music itself.

The most notable difference would have to be the vocal performance. Attila appeared to already have a very firm grasp of what he wanted to accomplish on the album, though it still required a little fine tuning before the final recording sessions. What can be heard here is a vocalist trying out various techniques in order to see what best suited the music and the overall atmosphere of the record. The dissimilarities are often difficult to perceive unless one has spent a significant amount of time listening to the originals, thus knowing each line very well. More noticeable are the various moments when an extra scream or a few additional repetitions of lines are present. When comparing them, it is very fortunate that these excessive bits were dropped. There is also an interesting difference near the end of "Life Eternal", where it sounds like multiple layers are being used for the final lines. A new level of evil is brought to these morose words, originally penned by Dead.

"I am a mortal, but am I human?
How beautiful life is now when my time has come
A human destiny, but nothing human inside
What will be left of me when I'm dead?
There was nothing when I lived"

As for the music, the guitars sometimes sound a little more crisp and the drums seem a little lower in the mix. This is actually a good thing, as the riffs are the most important aspect of this and should never be overpowered by the drums. I once read something that claimed that Hellhammer's drumming was all that held this album together and that Euronymous's guitar melodies were chaotic and nonsensical. I always felt that was an asinine conclusion and by hearing these versions of the songs (with the drums lowered), one can clearly hear that the riffs are certainly forceful and coherent enough to maintain a sense of direction on their own merit. One of the things that people will notice right off is the drum roll that was always present at the beginning of "Funeral Fog", but later dropped for the L.P. This decision was a very wise one, as it enables the music to create more of an initial impact when the album starts out at full intensity like that, without warning. Small things like that can make all the difference in the world.

In the end, Life Eternal is a valuable addition to anyone's Mayhem collection and is certainly worth checking out, whether you are extremely familiar with De Mysteriis Dom Sathanas or not. The material is strong enough to be enjoyed on its own, without the need for comparisons to the L.P. versions. This is a limited release, so be sure to seek this out sooner rather than later. 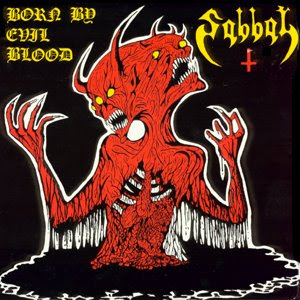 For those who aren't familiar with music from beyond the western world, Sabbat is a Black Metal band from Japan. They began under the moniker of Evil, before changing their name and, ultimately, their musical style. Born By Evil Blood is the group's second E.P. and was released in 1987. What can be found here is ugly and filthy Black/Thrash that is sure to appeal to fans of Venom, Bathory and especially the bands from the Brazilian scene of the mid-to-late 80s.

It all begins with "Satanic Rites", an mid-paced intro that takes the listener right into a blackened pit filled with the rotting corpses of feeble posers. The tone is ugly as hell, being very muddy and bass-heavy. This rumbling gives the feeling that your skull is being beaten with a blunt instrument. Yet underneath this murkiness, there is a clear talent for songwriting and musicianship. This definitely hearkens back to the earlier part of the decade, for the most part.

"Curdle the Blood" picks up the speed and intensity, and displays a real no-nonsense approach. The riffs violently tear through your mind, and the vocals are quite horrific. Gezol seems to have been influenced by the early Destruction material, to an extent. While the song is fast-paced, for the most part, there is a slower section in the middle that is somewhat reminiscent of old Sepultura.

The next song is "Poison Child", which is also rather high-speed, though somehow maintains more of an upbeat feeling than the previous track. Some of the riffs that are present here would not have been out of place on the first Exodus record. That really characterizes this as being much more Thrash than Black. There is a killer solo that appears near the middle of the song, followed by a change that helps to showcase a level of musical maturity that one might not expect from the cover art.

Born By Evil Blood is a very enjoyable E.P. for those that want raw and primal Black/Thrash from the 80s. The only complaint here would be that the release is too short and that the band made everyone wait several more years before recording a full-length album. While nothing on here can compare to the evil feeling of songs like "King of Hell", from 1991's Envenom, it was a very good start.
Posted by Noctir at 11:18 PM