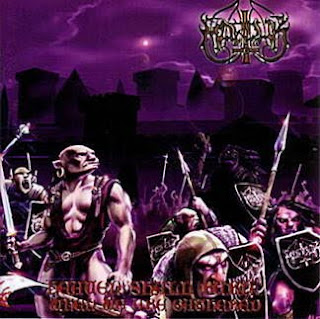 Following the release of Opus Nocturne, a few changes were made within the Marduk camp. Af Gravf was replaced by the inferior Legion, and they abandoned Hellspawn Studio for Peter Tägtgren's Abyss Studio. Released in the summer of 1996, Heaven Shall Burn... When We Are Gathered serves as a transitional piece, sharing some similarities with the past but, moreso, paving the way for future albums. From this point on, the band would go down a path of mediocrity.

The most notable difference is the new vocalist. Legion was a poor replacement for Jocke Göthberg, and it is quite evident. The main problem isn't the sound of his voice, but rather the manner in which he utilizes it. There are far too many instances where he simply will not shut up and allow the music to breathe. Whereas Af Gravf's voice was another instrument that was but a part of the greater whole, Legion's vocals are too much. "Darkness It Shall Be" is a very good example of everything wrong about his vocal style. There are hardly any pauses in between each line; he just drones on and on... and on. Some vocalists understand that the lyrics should be crafted in a way, to suit the song. Here, it seems that he is very adamant about including every single word, even though the track isn't nearly long enough to accommodate this. This would go on to become one of the trademarks of his vocal approach, and it can be unbearable at times.

Musically, Heaven Shall Burn... is a step down from the previous records, but it still has its moments. The production is more powerful than that found on Those of the Unlight and Opus Nocturne. However, it's stronger in the wrong way. Instead of making the guitars colder and sharper, everything seems bulked up. The guitars, in typical Abyss Studio fashion, almost seem to create a wall of sound, and the drums are way too loud in the mix. The drumming joins the vocals in creating a really oppressive feeling and drowning out the guitar riffs. Unfortunately, the band preferred this, as they would continue down this path with subsequent albums. The actual melodies and arrangements aren't so bad, but they would have been better accentuated with a different type of production. That was a recurring problem with Marduk's early output.

As far as highlights are concerned, there are good riffs all over, but "Dracul Va Domni Din Nou In Transilvania" is the one song that stands out the most, to me. The reason behind it is simple enough. It's the one track where the pace is slow enough to allow the guitars room to breathe. Legion still tries his best to remain the center of attention, but it's not nearly as annoying at a lower speed. That being said, it's a fairly boring song, so even the positive aspects aren't enough to salvage it.

In the end, Heaven Shall Burn... isn't a worthless album. As previously stated, there are decent ideas floating throughout. Nonetheless, it is not a record that I would consider to be essential, by any means. It fails to compare, favourably, to its predecessors, and it marks the beginning of the band's decline.
Posted by Noctir at 9:56 PM 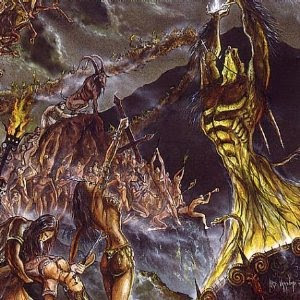 Opus Nocturne is the third full-length album from Sweden's Marduk. Once again, the band made a questionable decision, by choosing to record at Unisound/Hellspawn and allowing Dan Swanö to engineer and mix the L.P. The album was released by Osmose Records in December 1994, and signifies the end of the first era of Marduk's musical career, in a way. It was all downhill, after this one.

This was the first Marduk album that I ever bought, after hearing the song "The Sun Has Failed", on a college radio show. My first impression was that the album wasn't allowed to live up to its full potential, and this sentiment has not really changed in all these years. Dan Swanö deserves to be, brutally, beaten for his horrible lack of skill when it comes to recording Black Metal. I've made this point before, but it must be repeated: I'll never be able to fathom how the same guy that was involved in producing The Somberlain and Storm of the Light's Bane could have been responsible for the atrocious sound on so many other albums. The only thing I can think of is that the Dissection guys were more hands-on during the entire process, rather than leaving it up to Dan's ineptitude. Opus Nocturne possesses a very flat sound, and it's almost painful in a way; my ears beg for the guitars to rise out of the murky production. This music required more of a cold and sharp guitar sound and it's a crime that it had to be released in such condition. It is, somewhat, challenging to get past this major flaw. However, since the songwriting is so good, one must simply march forward despite this.

Speaking of the songwriting, the band did well to craft very memorable songs that are dripping with atmosphere. Musically, this record picks up from where Those of the Unlight left off, and maintains a similar atmosphere and style. Even though the production is such a hindrance, the force behind the songs cannot be denied. This album is dedicated to all things nocturnal and that feeling is conveyed very well. The songs on Opus Nocturne are not the all-out blast-fests that the band would later be known for. One can easily tell that much thought went into the structure and arrangement of each song. Here, there is no brutality for its own sake. Everything works toward a common goal. Songs, such as "Sulphur Souls", and "From Subterranean Throne Profound" are very dynamic, filled with peaks and valleys. that really give the listener the sense that they are being taken on a journey. Compared to their later works, even the faster riffs just seem much better composed and more meaningful. But the most significant aspect of early Marduk was atmosphere. This is something that they lost, for the most part, after this album.

As for the vocals, "Af Gravf" was the best vocalist that the band ever had, period. His style suited the music much better than any other that would go on to attempt to fill his role. Outside of simply possessing a raspy, deathlike sound, he also knew exactly how to utilize his vocals. He was well aware of how to use his voice as another instrument, in order to add to the overall aura of the song. Despite the poor Hellspawn production job, the guitar riffs are still the most important thing, and he never attempted to dominate the sound or drown out the melodies. His successor would have done well to have taken notes from his performances.

It is almost strange to think about, the fact that I nearly gave up on this band. Between the weak production jobs on Those of the Unlight and Opus Nocturne, as well as the boring style that they later embraced, I'd come very close to writing them off as yet another band that did nothing for me. Songs like "Materialized in Stone" and "Opus Nocturne" (featuring IT, of Abruptum/Ophthalamia) remained embedded in my brain and kept me from abandoning these works, altogether. Thankfully, in recent years, both albums have been remastered and reissued in somewhat better form. Normally, I'm the last person to approve of an album being altered from its original form. However, in this case, anything that enables me to get a stronger grasp on these melodies is a good thing.

There is really no way to choose which tracks stand out above the rest, as that would imply that some are inferior to the others, or serving as filler. Every piece of this album is essential to the overall atmosphere that is being created. It's filled with brilliant melodies and vocal passages, all flowing together, seamlessly. While the production can be a bit of a turn-off, it becomes less of an issue once you fully immerse yourself in the music and tune your ears in to the particular sound of this record. Opus Nocturne is an essential piece of mid-90's Black Metal and the final relevant album from Marduk.
Posted by Noctir at 10:29 PM