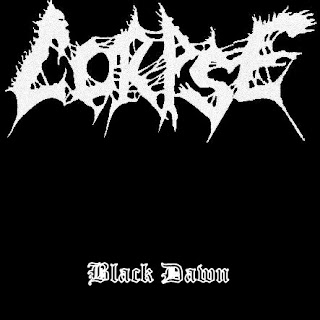 Any respectable fan of old school Swedish Death Metal should be well aware of Grave. However, too few seem to have heard of the band's output under their previous moniker, Corpse. It was in 1986 that they released the Black Dawn demo. While not terribly original, this three-song demo tape was enough to cement the band's place in the underground scene and also stands as the best material that the band ever released.

The title track opens with a riff that is quite reminiscent of Slayer. "Chemical Warfare" and "Angel of Death" both spring to mind, instantly. Later riffs even remind one of Metallica's "Creeping Death". Based on such comparisons, it would be easy to surmise that the music owes much more to Thrash Metal than to Death Metal, at this point. For the most part, the song is very fast, though it slows down a little for the refrain. This is straight-forward Death/Thrash that leaves none alive to bury the dead.

"Life in Disgrace" slows things down a little, opening with a more mid-paced Thrash riff. Again, it's nothing that hasn't been heard before, but it soon leads into a more clear example of an early Death Metal riff. Of course, the vocals are harsh and raspy, nothing close to the deep sound found on Into the Grave. Jörgen Sandström's voice sounded much more akin to the early works of Sodom and Kreator. This song shows a little more variation in the riffs and possesses a slightly more epic feeling, based on the overall arrangement. Of course, the Slayer influence still shines through prominently.

The demo ends with "Rise Again", which offers more primitive Death/Thrash riffs. The sound of the entire recording is fairly good; clear enough for everything to be appreciated, yet raw enough to suit the atmosphere of the music. The intensity is enough to shatter a few skulls, while still possessing a few memorable sections as well.

Black Dawn really makes one wonder what could have been if some label had snatched this band up a few years earlier and allowed them to record a full-length in the mid-80s. While the material is highly derivative of their influences, that doesn't change the fact that they were capable of putting out some quality stuff. Corpse can be tossed in the pile with bands like Morbid, Treblinka and Grotesque in not really getting a fair shake in the late 80s, while each would go on to achieve great success after evolving into new entities.
Posted by Noctir at 10:52 PM