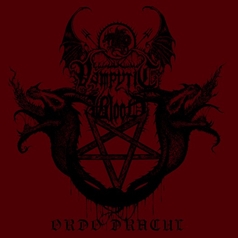 Ordo Dracul, released in 2012, is the first full-length album from Vampyric Blood, an obscure and mysterious Black Metal project from the cold forests of Finland. One would assume that the band's name was inspired by the Crimson Moon album, and there are also a few aural similarities. I initially thought this to be yet another creative outlet of the prolific Werwolf, of Satanic Warmaster, but he denied any connection. Regardless of the composer's identity, what one will find here is raw Finnish Black Metal that maintains the traditions set by those who came before.

This album clocks in around half an hour and consists of only five real songs, along with an intro and an instrumental. These compositions work best within the context of the album as a whole and there is a great sense of continuity from beginning to end. Ordo Dracul possesses an immensely dark and gloomy atmosphere. The music has a distant quality, reminiscent of some old Moonblood rehearsals, sounding as if it was recorded in the next room. The keyboards, however, are a bit higher in the mix, in a similar manner to Crimson Moon's debut album. That said, what Lord of Shadows has here created is far more organic. A few of the riffs would fit in quite well on some of the early records from Horna or Satanic Warmaster, yet there are also some quite eerie and otherworldly guitar melodies that will haunt your mind, such as those found in "Black Sorcery of Wallachia" and "Gloom of the Eternal Night". There is a sombre feeling that permeates most of the material, which is accentuated by the raw demo-like production. Upon first listen, it may be difficult to fully discern what is going on, as the cymbals, keyboards and vocal echo create sort of a clattering, but it does not take long to get used to the peculiarities of the recording. There are moments where a clean/gothic 'vampire' voice is utilized, but it actually works well here. For example, "Gloom of the Eternal Night" and "Satanic Wraith of the Night" benefit from the limited melodramatics. This is one of the very rare cases where such a tactic actually works, as it doesn't sound forced or cheesy. Throughout the album, there is a growing feeling of deep and overwhelming misery, exemplified by the melancholic notes that close out "The Sanguinary Scent at Dusk". While several of the songs feature slower, down-tempo sections, it isn't until the lifeless and depressive final track, "Devotion & Despair", that the dreary feeling conveyed by these sorrowful melodies completely sink in and overtakes you. The utter hopelessness and grief conveyed here almost seems to drain every bit of energy from you, leaving you empty and lifeless.

Over three years have passed since the initial release of Ordo Dracul and, as of yet, there has been no follow-up in the form of an L.P. Hopefully, this does not remain the case for very long. Lord of Shadows has done well to continue Finland's ongoing tribute and preservation of the raw Black Metal sound of the mid-90s, while still coming across as genuine and possessing somewhat of a unique feeling. This album would likely appeal to fans of early Mütiilation and Moonblood. While it may not compare to those that came before, it should satisfy those that seek more music in the same vein. Definitely give this a listen.
Posted by Noctir at 10:13 PM

Inquisition - Into the Infernal Regions of the Ancient Cult (1998) 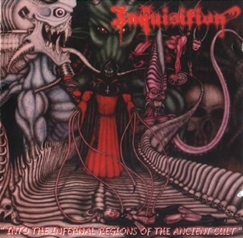 Released in 1998, Inquisition's debut full-length Into the Infernal Regions of the Ancient Cult has to have been a joke. This is clearly a parody of Black Metal, yet most listeners don't seem to be clever enough to recognize it. Everything about this, from the ridiculous titles to the generic songwriting to the obvious mockery of the vocals... this cannot be serious. But then how is it that the band still exists? In the seventeen years since the release of this spoof album, Inquisition has gone on to record five additional records. Somehow, they have managed to amass a decent following (at least in the states), through this continued charade.

The most severe problem regarding this recording has to be the vocals. It is inconceivable that anyone would possibly take this seriously. Of course, there have been many rather polarizing vocalists over the years, from Dave Mustaine and King Diamond to Varg Vikernes and Rainer Landfermann. But this goes beyond either a poor voice or an over-the-top style; what Dagon does is the single most absurd thing I have heard. He sounds like someone that has been suffering from throat cancer and needs an artificial voice box to speak. For the most part, that is precisely what he does: speaks. Very rarely are any actual Black Metal vocals used.

Musically, Into the Infernal Regions of the Ancient Cult, does not offer anything so good as to suffer through its shortcomings. The drums are too high and clear in the mix, with the guitars relegated to the background. The clarity of the production does the band no favours, as well. The percussion seems to be the driving force behind the songs, rather than the riffs, with a lot of random tempo changes that do nothing to help create any sort of atmosphere. The riffs are generic and indistinguishable. One can detect influences from the likes of Celtic Frost and Immortal, such as in "Those of the Night", but it is not pulled off very well. Speaking of which, one gets the impression that some of the song titles are a direct mimicry of the latter. The slower sections with the open arpeggio riffs are the most enjoyable parts, but they just come along indiscriminately and soon give way to ideas that come across as disjointed. There are even strange folkish elements shoehorned in, feeling awkward and forced. While there was much worse being passed off as Black Metal around 1998, Inquisition did nothing here that bands like Horna and Maniac Butcher weren't already doing much better at the very same time.

Sometimes, one can judge a book by its cover. In this case, the cover of Into the Infernal Regions of the Ancient Cult features artwork clearly one by a retarded fifth-grader. That sort of captures the overall feeling of the album, thanks to the idiotic vocals, sup-par songwriting and tedious running time. Generic Black, Death and Thrash Metal are here combined in a haphazard manner to create a pathetic example of modern 'extreme metal'. That this band is still going and releasing albums today can only be a testament to the fact that most idiots will buy anything if they're told how evil and cult it is, regardless of its low quality. Dagon and his cohorts are either charlatans or comedians. Either way, avoid this farce.
Posted by Noctir at 11:39 PM 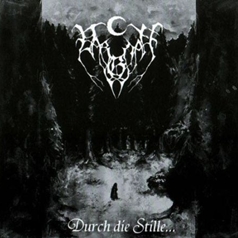 The first time someone recommended that I listen to Vargnatt, I was rather unimpressed. The Wintergrab demo possessed many unlikable qualities, and I lumped this band in with the likes of Sterbend and Nyktalgia, soon forgetting its existence. Yet some time ago, a friend sent me the track "Traum Von Einer Jugend" from the 2012 E.P. Durch die Stille... As a result of listening to this, I surmised that the band had improved and might be worth another shot. In the end, however, this proved to be too kind of an assumption.

For what it's worth, Durch die Stille... is better than Vargnatt's previous releases. The guy behind this solo project, Evae, dropped the whiny clean spoken bits that soiled earlier recordings, which is a plus. Certain riffs, such as the latter part of "Geist in Ketten", possess a rather disturbing tone and help to create an unsettling feeling. The aforementioned "Traum Von Einer Jugend" is similar in that it gives off a gloomy vibe while also being marked by a sense of urgency. Unfortunately, even the best songs on the E.P. are not free of filler riffs.

Vargnatt has the tendency to rely on strangely soft and non-threatening melodies that are uplifting and somewhat optimistic. Some of the songs hint at darkness from time to time, then swiftly retreat from it. The clean guitar bits soften things even more, more reminiscent of Katatonia than of Burzum. As for the track "Erwachen", this sounds more like something that belongs on a meditation CD, rather than a Black Metal album. Once again, some one-man "depressive" project turns out to be more calm and relaxing than anything else, similar to the really boring and dull material on the Nur ein Traum demo.

The production is rather smooth and on the clear side, almost in a similar manner to Sacramentum's Far Away from the Sun. There is definitely no rough or sharp edge to the guitar tone, here. One might think that a raw sound would benefit this material, but the songwriting itself is so weak that a change in presentation would not save it.

While there is a clear Burzum influence, the songwriting betrays an inability to really translate this inspiration into anything worthwhile. Nearly fifty percent of the material on Durch die Stille... is pure waste. The remainder shows some potential, but it is likely that Vargnatt will continue to dwell in mediocrity.
Posted by Noctir at 12:55 AM