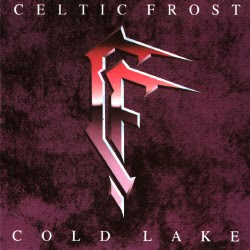 Cold Lake is the third full-length from the 'legendary' Celtic Frost. By this point, they had already defecated all over their legacy with the horrid trash known as Into the Pandemonium. With that album, fans witnessed the total pussification of this band, or so they thought. In 1988, Tom and Co. returned to finish the job. Remember, at this point, he was still completely disowning the Hellhammer material, and seemed even to dislike the early Celtic Frost stuff as well. Somehow, he got the idea that he could jump on the cock rock bandwagon, and cash in. In the end, he learned a hard lesson; when a Metal band tries to sell out, nine times out of ten, they only succeed in alienating their true fanbase and rarely, if ever, achieve the results that they had in mind.
The production of the album is even softer and easier to digest than the previous record, and the songwriting suits this pretty well. It's weak and uninspired, for the most part. Sadly, a few decent riffs manage to sneak onto the album, and the songwriting actually seems more consistent than on Into the Pandemonium. Of course, it's consistently bad, but consistent, nonetheless. Of course, upon closer inspection, one can detect that some of the riffs have been 'borrowed' from other bands. The latter part of "Petty Obsession" sounds familiar and the main riff of "(Once) They Were Eagles" is ripped off from King Diamond's "Twilight Symphony", released several months earlier on "Them".

One of the problems with this album is that some of the riffs are still too Metal for the crowd that they were trying to appeal to. The songwriting is tame and the production is weak, which goes along with the wretchedly awful vocals. However, this still might have been too heavy for the Poison and Cinderella fans (or whoever the hell they were hoping would buy the album and line their pockets with cash). This means that, at certain points, it is very clear that the music and vocals don't fit together very well. Actually, I cannot fathom what sort of 'music' Tom's homosexual mating calls were meant for, but it has no place in Rock or Metal. Some people simply cannot sing and are better served to stick with a style that hides this fact.

It is laughable that this is the album that the band seems to want to keep hidden away, as it hasn't been reissued along with the others. The one before this was just as bad, just in a different way, yet they still seem proud of that one. At any rate, regarding Cold Lake, this is one of those times when an album is completely torn apart and ridiculed for good reason. The following album, Vanity/Nemesis, is often called a comeback album. By comparison, it seems a little heavier and more Metal-based (especially with the stolen Megadeth riffs from "In My Darkest Hour", on "The Name of My Bride"), but it is more of the same. Avoid anything from this band, after 1985.
Posted by Noctir at 1:57 AM 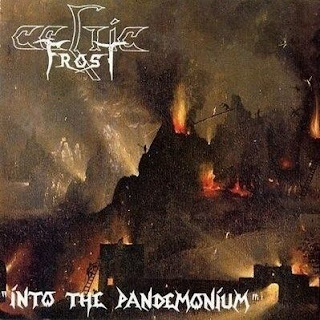 Into the Pandemonium is the second L.P. from Celtic Frost, released by Noise Records in November 1987. While some consider this a part of the band's "classic era", the truth is that this is the point where the band became completely worthless. To Mega Therion had its problems, but the good outweighed the bad, for the most part. However, one must really struggle to find any redeeming qualities about Into the Pandemonium. It's called "avant-garde", by those who support this abomination. In reality, it represents a total lack of direction or motivation.

The album begins on a negative note, which is kind of appropriate as it lets the listener know what to expect. In this case, it serves as a warning to turn this off and toss it in the nearest garbage can. "Mexican Radio" is a terrible song and shouldn't have been covered, but the fact that they insisted on starting the record out with this abomination, rather than burying it somewhere on Side B, is the first of many mistakes.

The next largest complaint would have to be the atrocious vocal delivery of Tom Warrior. Songs like "Mesmerized" have half-decent riffs ruined by his bloody awful attempts to sing. His vocals were always one of the low points of Hellhammer and early Celtic Frost, not really being dark or evil enough to suit the music, but here it defies all logic. He sounds like a whore being anally raped in a back alley somewhere. He couldn't sound any weaker if he tried. He doesn't utilize this style the entire time, but far too much. One has to wonder what the hell he was thinking.

As for the music, there are some brief flashes of the old Celtic Frost, though still seeming tame and easier to digest for all of the goth kids that they were, obviously, trying to appeal to at the time. Songs like "Inner Sanctum" seem good, compared to the horrid filth that they're mixed in with; however, even the best songs on this record would be singled out as the weakest ones, had they appeared on Morbid Tales or Emperor's Return. Listening to "Sorrows of the Moon", I have to think to myself that, if they had sought out a new vocalist, maybe this 'artistic vision' would have been better realized. But, of course, Tom's vocals give the mental image of someone sitting in a dark corner, crying and applying eyeliner while listening to The Cure. "Babylon Fell" sounds like a rejected track from To Mega Therion, more or less. And, naturally, it features more of Tom's whining vocals. However, this isn't the worst offense presented here.

Somehow, one of the forefathers of Black and Death Metal decided that it was appropriate to use dance beats, in the middle of the record. "One in Their Pride" is completely useless and only goes to show that the members of this band were completely out of touch with their roots; no more Venom or Black Sabbath, it appears. As for "I Won't Dance"... nothing can be said to convey how horrible this is, though some irony can be pointed out regarding the title of this song and the sound of the previous one.

Into the Pandemonium is offensive to the ears, and it marks the moment where Celtic Frost lost all credibility. For anyone that was surprised by the pure feces released on the Cold Lake album, they must not have heard this one first, since the drop in quality was already quite evident. If you are a fan of Celtic Frost (or just someone with good taste, in general), and you have been fortunate enough to not have heard this yet, do yourself a favour and avoid this at all costs. It is utterly worthless and you're better off to just flush your money straight down the toilet. While there are a few passable riffs, you are better off listening to an album that is actually good.
Posted by Noctir at 1:26 AM