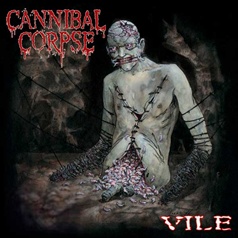 Upon its release in May 1996, the fifth Cannibal Corpse L.P. was surrounded by some amount of controversy. Chris Barnes had been kicked out of the band and replaced with George Fisher, only known for his work as part of the very mediocre Monstrosity. Along with the new frontman was a new logo, which looked awful. As such, Vile was under closer scrutiny than any of their previous records. The end result was quite disappointing.

While one would think that Death Metal vocalists are much more interchangeable than someone like King Diamond or Rob Halford, the truth was that many considered Barnes to the driving force behind the band. He drew the logo, came up with concepts for the cover art, wrote all of the lyrics and did all of the interviews. Even though his 'cookie monster' vocal style seemed rather generic by this point, changing the voice of any band is always a tricky move. His replacement didn't help matters by giving a rather half-hearted and weak performance. He failed to either match up to his predecessor's work or to stand out on his own and really leave his mark on the album. Anyone could have taken his place and done a better job. He honestly sounds like any Cannibal Corpse fan trying to do a Chris Barnes impersonation.

Musically, Vile follows the approach of The Bleeding, in some instances. Whereas the last album sacrificed some of the 'brutality' of the earlier offerings to focus on atmosphere (with songs like "Return to Flesh" and "Force Fed Broken Glass"), the bulk of Vile feels a little more technical and this doesn't really work so well. There are some decent riffs here and there, like the tremolo bit in "Perverse Suffering", though the majority of the track is dull. Similarly, there are very brief parts in "Bloodlands" and "Orgasm Through Torture". Songs like "Disfigured" and "Eaten from Inside" sound like rehash from previous records, something of which Cannibal Corpse would go on to build their entire career.

By 1996, it appeared that Death Metal had pretty much run out of steam and all of the classic albums were already at least a few years old. None of the bands seemed to really have anything left to contribute, other than to just rehash what had already been done. After hearing the Created to Kill recordings, it is clear that the fifth Cannibal Corpse album was destined to be boring, no matter what (and Six Feet Under's second full-length proved that Chris Barnes had allowed his voice to completely deteriorate and should have quit making music). People can blame the new vocalist or the different logo as the only reasons why Vile is looked down upon, but the fact is that it's just not very good. Making an album of regurgitated ideas, spiced up with extra technicality, was never going to work. If you're a fan of this band, stick with the earlier albums; not just because of the vocalist or the logo or any reason other than that Cannibal Corpse said all that they had to say with those first four records.
Posted by Noctir at 6:05 AM 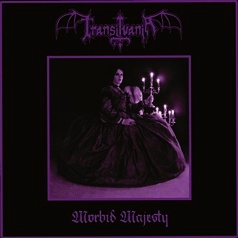 Usually, I steer clear of modern bands and releases, with very few exceptions. However, an acquaintance recently brought to my attention the Austrian Black Metal band, Transilvania. It was said that their September 2015 demo tape, Morbid Majesty, would be right up my alley. Recommendations are often tricky, as I am often a bit too selective, but the old school vibe lured me in, right from the start.

Musically, this could best be described as Black/Thrash, in the vein of old Desaster. Even the vocals are very reminiscent Okkulto's performance on A Touch of Medieval Darkness. The musicianship is rather sloppy, but that actually benefits this style and adds to the raw feeling. Fortunately, the production is gritty and unprofessional, which is exactly what is needed for this sort of music. One of the biggest mistakes made by a lot of 'retro' bands is that they play a bit too tight and have a sterile, modern sound to their albums, thus ruining the whole thing.

"On the Back of Satan's Stallion" and "One Night in Salem" include some pure Black Metal riffs, but these are brief and soon give way to Teutonic-inspired Thrash, which dominates most of the recording. The majority of the riffs are purely '80s-inspired and, along with several of the solos, hearken back to the middle of the decade. For the most part, the songs maintain an intense pace, but there are times when things relax just enough to let the riffs breathe a bit and to accentuate the dark atmosphere, such as in "Moonlight Sorcery". There are even moments that are a little more melodic, showing some old Mercyful Fate influence, perhaps. Rather than just utilizing harsh Black Metal vocals over traditional Thrash riffs, the members of Transilvania do well in composing songs that seamlessly transition from one style of riff to another to create an obscure and hellish feeling.

Morbid Majesty is a great little demo, oozing the sort of old school vibe found on classic records from Destruction, Tormentor, Sabbat, etc. Hopefully, Transilvania will manage to record more material in the near future and, more importantly, maintain the same raw and evil feeling as found on their debut release.
Posted by Noctir at 9:30 AM