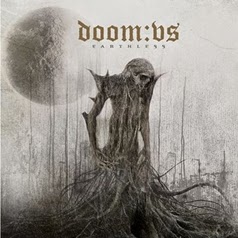 Six long years passed since the release of Dead Words Speak. With Doom:vs being a side project, this is somewhat understandable, but still far too long. Rumours of a follow-up started a couple years back, and yet it still took this long for anything to come of it. With the release of Earthless, in April 2014, it would seem that it does not live up to the expectations set by the previous works.

The primary drawback to this record has to be in the vocal department. For one reason or another, Johan decided to bring in Thomas A. G. Jensen from Saturnus to provide vocals for most of the album. This was a horrible mistake, as there was nothing about the vocals of the first two albums that needed to be improved, really. Jensen's voice is too deep, losing what little feeling could have been added to the music. These sort of toilet-bowl gargles were fine for the old Broken Hope records, but here they are ineffective. Even worse, the clean parts that he contributes are completely unlistenable, possessing a nasal and whining quality. However, the worst of all are the parts that are neither harsh nor clean, but just sort of a hardcore shouting. Johan still contributes some clean bits, doing his best My Dying Bride impersonation, but these brief moments fail to save anything as they come off as forced and disingenuous.

The songwriting is much the same as before, featuring a good number of crushingly heavy riffs with a bleak and dismal feeling, as mournful melodies accentuate this melancholic vibe. Early on, Earthless is somewhat reminiscent of October Tide's A Thin Shell, with the title track not being too dissimilar from "The Custodian of Silence" is some aspects. There is no severe drop in quality from the previous releases, though it is by no means good enough to warrant such a long wait. One would think that Johan could have come up with this material, quite easily, back in 2010 or so. The number of truly memorable melodies is quite few, not nearly enough to make up for the problems this album possesses.

The production is about the same as the last albums in that it is pretty modern-sounding, but not so overdone as to lose the feeling of the music. Of course, being several years later, there is a noticeable difference. There is a bit more fuzz to the guitar tone than before, with neither helps nor hurts the music. To be honest, making the sound more raw would only have made the vocals even more unbearable, as this guy does not have an underground voice, at all.

Earthless is filled with rather average material, with the exception of "The Slow Ascent", which includes some gloomy tremolo riffs. Of course, as with the rest of this disappointing album, Jensen ruins most of it with his terrible vocal performance. Johan may have a thing for Saturnus, but some people actually wanted another Doom:vs album and we got ripped off. So much for this band. Avoid this.
Posted by Noctir at 1:01 AM