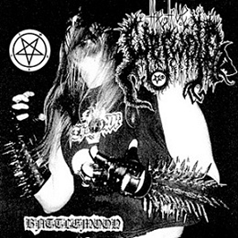 The True Werwolf is another project from the force behind Satanic Warmaster, Pest, Orlok, etc. My familiarity with this one is rather vague, only having heard enough to know that some of the material is rather ecclectic and so on. Fortunately, 2011's Battlemoon is a straightforward recording of raw Finnish Black Metal, which appealed to me right away.

This E.P. features just two tracks, which is a shame as I could listen to an entire record in this vein. The style here is very primitive and raw, even including a bit of hissing and tape warpage that makes it sound like a twenty year-old demo. The songwriting is very straightforward and one can hear traces of old Darkthrone, Vlad Tepes and even Moonblood in some of the riffs in "My Journeys Under the Battlemoon" and "The Grandeur of Death's Palace". Speaking of Vlad Tepes, there are layered vocals throughout the recording that are reminiscent of the multiple voices utilized on their old demos. Many of the riffs on Battlemoon are cold and, at times, nostalgic. This is something that Werwolf is definitely known for. The simple melodies are rather haunting and memorable, and I found myself listening to these tracks on repeat until they'd played about a dozen times, without wearing thin whatsoever.

The True Werwolf's influences may be transparent (as is often the case with Black Metal anyway), but Battlemoon succeeds in capturing a raw and old sound that should satisfy fans of the aforementioned inspirations, as well as his other projects. It is a good thing that, in this disgusting modern age, some people are still offering up ugly, primitive Black Metal.
Posted by Noctir at 1:13 AM