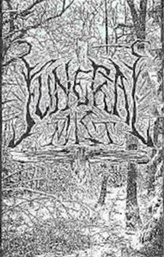 Only being familiar with their 2003 full-length Salvation, Funeral Mist is a band that I wrote off a long time ago. It's strange, as I would normally check out demo recordings, but the material on that album was so unappealing that there didn't seem to be any point in doing so. Eventually, someone recommended that I give a listen to their 1995 demo, Darkness. While it's not exactly anything special, it's much better than the later works issued under this name.

Darkness is quite under-produced, possessing a raw sound very typical of demos of this period. At times, the guitars have sort of a buzzing/whirring sound, which actually suits the atmosphere. It shares a few similarities with Horna's Kun synkkä ikuisuus avautuu rehearsal.  Fortunately, this tape features Typhos (later of Dark Funeral and Infernal) on vocals, rather than the annoying Arioch (who only handles bass duties here). The overall sound is fairly muddy at times, but you can still manage to hear everything that is going on.

The best songs on here are "Dreams of a Time Before Time" and "In Black Silence". The opener is much better than anything that follows, building some unrealistic expectations and giving way to a small measure of disappointment. The latter utilizes a bit of synth, giving somewhat of a horror vibe. Many of the riffs seems to take inspiration from bands such as Emperor and Marduk, leaning more toward the former. The keyboard interlude, "In the Shadows I Wait", may not be all that necessary, but its inclusion doesn't hurt anything, either. The guitar melodies found in songs like "Funeral Mist" and "Blasphemy" (as well as the overused synth in the latter) give the music a lighter feeling, losing the dark and evil vibe that such a necro recording could have created.

All in all, this is a fairly average recording. It is weaker than other Swedish Black Metal demos of the time, such as Moloch's Cutting Holy Throats or Härskare av den svarta natten by Skuggmörker. It should, of course, be of interest to those who are searching for solid mid-90s Black Metal. That said, Darkness is only remarkable in any manner by comparing it to Funeral Mist's better-known (and incredibly awful) releases.
Posted by Noctir at 2:42 PM 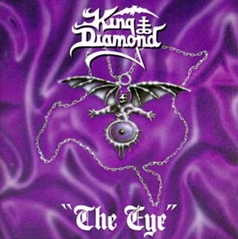 The fifth King Diamond L.P. was recorded in Sweet Silence Studio (of Ride the Lightning fame) and released in October 1990. As with Conspiracy, this album pales in comparison to Fatal Portrait or Abigail; however, The Eye was my first King Diamond album, so it holds a fair amount of sentimental value.

It was a cold October night when a girlfriend of mine came by to interrupt my homework. In her bag, she had a handful of CDs, some of which I was either already familiar with and others that seemed entirely uninteresting. One album stood out, however, that being The Eye. For whatever reason, though I loved the old Mercyful Fate material, I'd not bothered to seek out any of King Diamond's 'solo' albums. Upon hearing the opening riffs and vocals of "Eye of the Witch", I was hooked.

The best songs on this record feature very memorable riffs, quite similar to Conspiracy. Nevertheless, with the abundance of keyboards and clean guitars that are utilized throughout the album, The Eye comes off as a but softer than its predecessor. Tracks like "The Trial (Chambre Ardente)" and "Two Little Girls" are fairly weak and are yet another example of how concept albums tend to let the story dictate the flow of things, rather than the music itself. Placing these, essentially, 'throwaway tracks' so close to the beginning of the L.P. really kills the momentum before it even had a chance to build. Some of the other songs don't seem fully strong enough to stand on their own, like "Into the Convent" and "Father Picard". In fact, this is probably true of every track aside from the opener and "Behind These Walls". That said, despite a few speed bumps, the album works really well as a whole. The Eye still possesses a strong '80s Metal feel, due to the style of riffs and the solos. King's voice is also in good condition on this recording, with some quite infectious vocal lines, such as those found in the aforementioned "Behind These Walls" and "The Curse". Special mention should be made of the brief instrumental track, "Insanity". It does so well to create a really sombre atmosphere and its placement on the album works very well.

The Eye marks the end of King Diamond's classic period. The strongest songs on here are probably "Eye of the Witch", "Behind These Walls" and "1642 Imprisonment". Truth be told, The Eye is an album that is much more effective when listened to in its entirety. Though it might be difficult to properly assess this record, due to the nostalgia factor, it would be fair to say that it's a solid release and definitely worth checking out.
Posted by Noctir at 11:25 AM 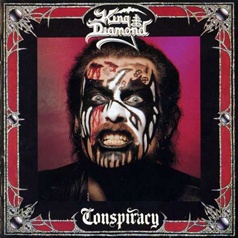 King Diamond's fourth full-length, Conspiracy, was released through Roadrunner Records in August 1989. This L.P. features the same lineup as its predecessor and was recorded at the same studio, but is vastly superior. The feeling from Fatal Portrait and Abigail is definitely gone forever, but this is a very solid album.

Conspiracy continues the story from "Them" and, though the first part seemed quite weak, turns out to be a much more interesting concept this time around. Unlike the previous album, none of the tracks here feel like filler that only exist to prop up the lyrics. While some songs are certainly stronger than others, each one is able to stand on its own. The album is filled with very epic riffs and memorable vocal lines, especially the opening track "At the Graves". The much more robust production really suits the material, as well. The guitars sound much more dynamic, as opposed to the flat sound of "Them". In a sense, the guitars are more geared toward the large-budget stadium rock sound, reminiscent of Ozzy Osbourne's No Rest for the Wicked. It's heavier, but not in the same way as an album like Abigail, which had a sharper and more metallic guitar tone.

Musically, the compositions here are miles ahead of those found on "Them". The aforementioned "At the Graves" is just a massive beast, perhaps a little too long, but still a monumental track and a good one from which to build the rest of the album. Songs like "Sleepless Nights", "Amon Belongs to Them" and "Victimized" are bursting with the same sort of energetic riffs that will easily hold your interest. As well, King's voice is still in good form here and provides a lot of memorable moments. "A Visit from the Dead" may be the most melodic and complex track on here, along with "Something Weird". It begins with a quiet section that then gives way to some very Abigail-esque riffs. These combine with King's haunting falsetto screams to create a rather dire feeling. "Let It Be Done" and "Cremation" also do well to maintain the horror vibe.

While it cannot compare to the first two records, Conspiracy unquestionably deserves to be considered part of King Diamond's classic period. It's a very solid album that does well to correct the mistakes made on the previous release. After the very first listen, it's quite likely that many of these riffs and vocal lines will remain in your head for a while. Though none of the tracks can really match up to the intense and epic opener, there's not a bad song on here. This is definitely recommended.
Posted by Noctir at 7:16 AM