Ondskapt - Slave Under His Immortal Will (2001) 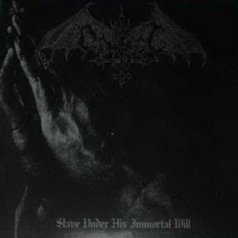 Created in the year 2000, by Acerbus and Nabemih, Ondskapt has remained one of the more obscure bands within the modern Swedish Black Metal scene. With only four releases to the band's credit, they have still managed to make a name for themselves in the underground, due to the quality of their work. Released in June 2001, Slave Under His Immortal Will is still one of the best recordings to come from the darkened minds behind Ondskapt.

Containing only two songs, this E.P. bears similarities to other Swedish bands of the time period, such as Watain and Armagedda. There is a murky atmosphere to this material that hearkens back to Mayhem's classic period, and surpasses that of their contemporaries. One must bear in mind that this came a couple years prior to Casus Luciferi. With evil guitar melodies that could have easily been written by Euronymous, “Slave Under His Immortal Will” and “Dark Path” take the listener on a journey into the blackest of shadows. The tempos are varied, with a lot of emphasis on slower and more mid-paced sections, allowing the riffs to really soak into your subconscious, while the distant and tortured vocals add a hellish feeling. There is nothing violent or intense about this, at all. Ondskapt was not trying to compete with the speed or technicality of many others; rather, they focused on creating a bleak and dismal mood. This is most evident, late in the first track, as a sombre guitar melody is accompanied by tormented howls, sending chills down your spine. The musicianship is not the tightest, but this is actually reminiscent of many of the bands that formed the Second Wave, and is preferable to the mechanical sound that is so prevalent in recent years.

The production demonstrates a fairly good balance. The guitars have a fuzzy tone to them, but are still thick enough to pack a bit of a punch. Things are clear enough to be heard pretty well, except during the brief fast parts in the second song, where it all runs together a bit. One may notice that the bass is much more audible than on most Black Metal releases, but this adds a layer of gloom to the overall sound. It is absolutely necessary for the bass to be as high as it is in the mix, accordingly. The vocals are buried, somewhat, but it may be for effect and certainly assists in giving it an otherworldly vibe.

Slave Under His Immortal Will is a high quality release and is recommended for any Black Metal fan. Whether you happen to be into the more recent Swedish sound, or a fan of the early '90s releases, this should appeal to you. This E.P. Is a good starting point for anyone interested in exploring the music of Ondskapt, though it may be that you find this superior to all that they released afterward.
Posted by Noctir at 1:42 AM 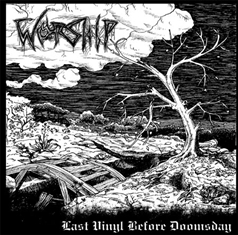 Spawned within the German underground in the late '90s, Worship emerged onto the Funeral Doom scene with a very monumental recording. Originally released on cassette, in limited numbers, Last Tape Before Doomsday made an impact like few others. It has been reissued on a variety of formats, with the name changing accordingly, since it was first heard in April 1999. It goes to show just how important this is, that several labels have made sure to keep it alive and available, throughout the past decade or so.

Containing only four songs, this demo still manages to clock in at over 46 minutes, which is average length for an L.P. The material does well to uphold the traditions set forth by bands like Thergothon and Skepticism, while also taking some influence from the likes of Bethlehem and Mournful Congregation. In a sense, this takes the whole concept of Funeral Doom to a new extreme, with the majority of the material crawling at such a deathlike pace that it may tax the listener's patience. However, for that very reason, it is best to listen to this when you are actually in the right mood, rather than just tossing it in casually. The songwriting is very primitive and minimalist, with so little going on at times that the slightest change makes that much more of an impact. Each song features a lot of subtle changes, while rarely straying too far from the main theme. To experience Worship's Last Tape Before Doomsday is to die a slow death, being tortured the entire time. Just hearing the anguished vocals of Max Varnier, combined with the mournful riffs and the oppressive atmosphere, is to suffer in torment. The gloomy melodies have a way of reaching deep within you and pulling all of the misery and sorrow of an entire lifetime right up to the surface, to be felt at full force once more. This is most evident on the song “Solicide and the Dawning of the Moonkult”, which has to be the most effective and memorable piece of music on this release. From the very beginning, the dismal riffs and life-weary vocals drain the energy right out of you and leave you eagerly awaiting a swift death. And yet the end will not be painless. The utter despair that grips you is unlike anything that you have ever known, and you are imbued with an inescapable hopelessness. As the music slowly progresses, additional riffs are gradually introduced, along with quieter acoustic bits that hearken back to Bethlehem's prime. There is something epic about the arrangements, yet this is no fantasy trip that you are taken on. This is an involuntary journey through pitch-black darkness and the ultimate realization that there is no purpose for the horror and misery that you feel deep within. You begin to see the world for what it really is, and a powerful longing to leave this life behind grows inside of you. Just as you think that you may be able to tolerate it and to persevere, it intensifies and lays waste to what little resolve you still possessed.

While the first two songs may be more depressing and recall heartbreaking moments of absolute melancholy, the second half of the album builds upon this in an unexpected way. While the approach is still very much the same, with the songs slowly crawling from the blackness, the riffs convey more of a bleak feeling that goes beyond personal tragedies and agonizing memories. There is something more sinister and all-encompassing about “Eclipse of Sorrow”, in particular. In this case, it may be that there is a more direct link to the underlying malevolence that lies at the root of all insurmountable afflictions. This is where the record manages to avoid simply being a one-dimensional batch of depressing tunes, and still calls forth to the primordial evil that waits in the dark shadows, ever-watchful. While the final melodies of “Whispering Gloom” slice into your flesh and begin the wretched bloodbath, “Worship” is more of a reminder than no one will even be around to mourn your loss and that it was all for nothing. You remember just how insignificant you are, and that your immeasurable suffering is as meaningless as the rest of your pitiful existence.

"There will never be a dawn again
Our darkness has begun"

As one would expect from a demo, this is pretty under-produced. It is, by no means, as necro as a lot of demo-quality Black Metal, but it possesses a rawness that truly suits the atmosphere and the songwriting, giving it a stronger sense of of genuineness that would have been lost if these songs had been recorded in an expensive studio. Though the compositions are very strong, that would have rendered them rather stale. Thankfully, Worship got just the right sound for this. The guitars are suffocating, the bass is audible enough to add a layer of woe to the proceedings, while the vocals and drums are leveled-off enough to keep them from overpowering the soul-crushing riffs. The guitar tone is flawless, working well to emphasize the miserable melodies, enabling them to instantly drain the energy from your body and to give you a disturbing sinking feeling. There is enough clarity to hear what is going on, at all times, but not so much that the music would lose something.

For fans of Funeral Doom, that have not yet heard this, you are doing yourself a disservice. Worship has not made as much of a name for themselves as they should have, partially due to Max's suicide in 2001, but what the band has released is on par with anything else that the sub-genre has to offer. If you are annoyed with the older Death / Doom releases for not being grim enough, or the ever-flowing stream of Doom bands that incorporate too many romantic elements in an effort to create something 'pretty', Last Tape Before Doomsday is certainly for you. Now, listen to this and then kill yourself.
Posted by Noctir at 11:38 PM