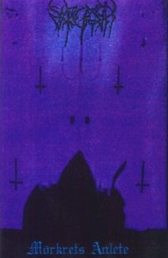 Sargoth was a short-lived band that existed for a time in the mid-90s, releasing only one demo and one full-length before vanishing. Their first offering was the Mörkrets Anlete demo, recorded in 1995, which is rather typical-sounding melodic Black Metal from Sweden.

Fortunately, though this demo showcases the typical sort of melodicism that one would expect from Swedish Black Metal, yet the rougher production helps to keep it from becoming too much to stomach. As well, the vocals are fairly ugly, which also assists in offsetting the potential "beauty" of the melodies. Ignoring the intro and outro, Mörkrets Anlete really consists of only four tracks. Songs like "Barn av Natt" and "Christian Blood" feature cold and sometimes gloomy tremolo riffs that would not be out of place on the debut albums from the likes of Sacramentum and Vinterland, that followed in 1996.

Mörkrets Anlete is rather average for the time it was released. It cannot be considered a 'hidden gem' by any means, but it is definitely worth tracking down for those that are into this style of Black Metal. Though, don't bother with anything else from the band. By the time of the Lay Eden in Ashes full-length, a few years later, Sargoth had shifted their sound just enough to be considered a generic Dark Funeral clone. All in all, a rather forgettable band, but a couple decent songs here.
Posted by Noctir at 9:28 AM 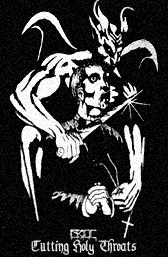 Cutting Holy Throats is the sole release from the band Moloch. This demo emerged from the northern darkness of Sweden in the autumn months of 1995. What can be found here is raw and evil-sounding Black Metal that pulls no punches.

The songwriting is rather straightforward, and yet never boring. Unlike many of their Swedish brethren, Moloch avoids the path of the overly melodic, as well as the trail toward grinding nothingness. The dominant elements are the guitars and vocals, much as it should be. The drums are by no means buried, but rather kept to a normal level and the performance itself limited to only what is necessary for the songs. The guitars possess an ugly sound, though the riffs are still easily discernible, even during the faster parts. The compositions are rather dynamic, featuring enough variation to keep the listener's attention. "När Valkyrierna Rida" gives off a dark and morbid feeling, particularly during the slower section. This is definitely the standout of the demo. As for the title track, it is rather flat, though not bad. "Fucking the Demoness" hearkens back to old Bathory and Grotesque. "Satan" brings a darker feeling to the recording, connecting a bit more with the first song than with the material in-between.

Moloch certainly did not reinvent Black Metal with Cutting Holy Throats, nor would I imagine that was ever their goal. Perhaps, it is neither unique nor special, but this demo is definitely worth tracking down for those that appreciate raw and ugly Black Metal from the mid-90's.
Posted by Noctir at 8:19 AM 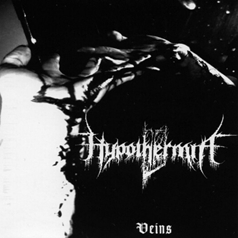 Released in September 2006, Veins is the first full-length album from Hypothermia. Hailing from Sweden, this band is another of the countless entities that claim to make 'Depressive Black Metal', a sub-genre that mostly consists of pointless trash and posturing. Like many things in this empty modern age, it seems to be more about image than substance.

The first thing that one may notice is the extremely pitiful and preposterous vocal performance by Kim Carlsson. From the beginning of the first track, it appeared that he would be more restrained and at least hold some of his effeminate screams in, but he unleashes many pointless and farcical little squeals, later on. It is as if most fans of early Burzum that go on to make their own music were half-deaf and just heard shrill screaming from Count Grishnackh, whereas his voice actually possessed a raw and primal feeling, a true sincerity that is lacking in almost everyone that attempts this style. Even Landfermann's over-the-top vocals, on Bethlehem's Dictius Te Necare, had some sort of feeling. However, Hypothermia is content just existing as some sort of parody. Carlsson's voice sounds like a nine-year old girl that is afraid of a spider.

Beyond roaring in laughter at the horrible vocals, there is not much to keep one's attention. The music is immensely boring and accomplishes nothing. The melodies are lifeless and convey no sort of feeling, whatsoever. The songs don't build toward anything, nor do they take the listener on a journey. It's all just background noise, and quite poor at that. After a slew of demos, somehow, these guys thought that this material was worthy of recording for their debut full-length, their first real impression upon the music world. Yet what they have offered is more audio rubbish that is just as tedious and uninteresting as before. The only value that this monotonous filth could have would be to put people to sleep, that is, if the vocalist would stop crying over the end of his three-week relationship from ninth grade.

Hypothermia is a complete waste of time, more of a joke band than anything else. How this project has any followers is beyond me, as it is wholly without merit. People like this probably got attracted to the general aesthetic of Black Metal and thought it was a nice little club to join, since they felt misunderstood and lonely, deciding to imitate it for one reason or another. The title of track two says it all, this is definitely a "failure". There is absolutely NOTHING dark or depressing about this horrid little album. Avoid this and listen to early Burzum, Strid and Mütiilation, instead.
Posted by Noctir at 10:46 AM