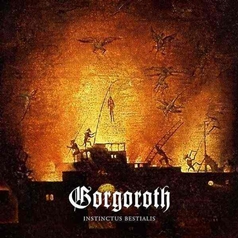 Following the soap opera surrounding the rights to the Gorgoroth name, it seemed as if Infernus was motivated to reclaim the band's former glory and to prove his worth. Though Quantos... had its problems, it was the best thing they had released since Under the Sign of Hell. At that time, he talked about working on new material already, thus much was expected from these guys. Then a couple years passed and all they had to offer was a very poor re-recording of one of their classic albums (always a bad idea), displaying their refusal to abandon the modern and plastic sound of Asklund's studio. Four years later, it appears that they failed to learn from their mistakes. Perhaps, Quantos... was an anomaly, and Gorgoroth is condemned to remain a shadow of its former self. The June 2015 release of Instinctus Bestialis confirms this feeling and serves as a disappointing epitaph for a once-relevant band.

The first issue to address is the horribly modern and plastic production job, courtesy of Tomas Asklund. It is understandable to a degree. Competent drummers are difficult to come by, but to find one with his own studio is even better, in the eyes of Infernus. It was the same during Asklund's tenure with Dissection and also Infernal. Unfortunately, his technique is terrible and sounds like a drum machine, so there would not be much difference if they had skipped out on including him at all and simply used a drum program. It's not as if he even plays live with them, so his membership in the band is entirely worthless and adds nothing but a disgustingly sterile and souldead sound to the music, through his role as producer and as the trigger-happy drummer. His overactive performance does not ruin as much as one might expect since the songwriting, itself, is extremely flawed. That is the second main problem with Instinctus Bestialis. Infernus must have been quite confused while composing these songs, forgetting that Gorgoroth is supposed to be a Black Metal band. Too many of these riffs, as demonstrated already in the second song, sound like modern Death Metal. I doubt anyone waits in anticipation for a new Gorgoroth album so that they can hear pointless chugging and generic melodeath. The magic is gone. Infernus might be able to pull a few decent melodies from his mind, but even half of those are just rehashed from previous songs, such as "Ad Omnipotens Aeterne Diabolus" lifting ideas from "Satan-Prometheus", while the other half seem to be rejected Dissection riffs. Similarly, "Awakening" sounded better the first time I heard it, on the previous full-length, under the title "Aneuthanasia". Finally, the new vocalist is rather worthless and the epitome of average. It may be that the deeper vocals were desired since the direction of the music has changed so much. I'm not sure that even Pest could have saved this wretched pile of excrement. So while the vocals are boring and not at all what one would expect for this band, the end result is not effected so much, due to the poor and forgettable songwriting.

This is what happens when people become professional musicians. Instinctus Bestialis possesses no true spirit, and deep down Infernus knows it. This is merely a commercial product that is meant to make some money for the band so that they can continue touring and living off of the music, instead of having to get real jobs. I'd considered Gorgoroth to be dead several years ago, but Quantos... gave hope that things were back on track, in the hands of Infernus. Instead, he's proven that he no longer has it, and that this band is irrelevant. Gorgoroth is not the band to keep the black flame alive, so forget them. Instead, look to Finland and the likes of Clandestine Blaze and Horna, or just stick with the classics. Either way, avoid this pile of garbage.
Posted by Noctir at 9:13 AM