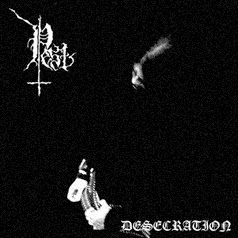 Not long after I first got to Stockholm, years ago, I met an acquaintance that was often pushing newer bands on me. I was exposed to the Swedish band Pest around the same time as Armagedda. Listening to Blasphemy is My Throne and The Final War Approaching, it seemed that both were doing a rather bland imitation of Darkthrone, so I ignored them. Though Armagedda redeemed themselves a little bit with their second album, Pest's debut effort left a lot to be desired. Released in October 2003, Desecration has always bored me, no matter how many times I've come back to it over the years.

When dealing with Black Metal from the twenty-first century, of course there is a great deal of Darkthrone-worship to be found. In cases when the bands also add something of their own to the formula, such as Clandestine Blaze and early Sargeist, this is perfectly fine. Unfortunately, Pest adds absolutely nothing. These guys are competent musicians, but their songwriting is very weak. They do their best to rip-off various Darkthrone tracks, sticking so close to the originals that the songs just seem like empty copies. When listening to this, I don't hear "Ninth Nocturnal Departure" or "Dark Northern Winters" or whatever other titles they've chosen for their plagiarized nonsense. I just hear a band failing to play covers of songs like "Natassja in Eternal Sleep" or "The Hordes of Nebulah". It's so bad that even the vocal patterns and some bits of lyrics are based on the originals. There is absolutely no imagination, no creativity on display here.

Another huge problem, aside from the terribly weak songwriting, is the production. The sound is much too modern and clean for this style of music. The truth is that they could have written very interesting riffs and come up with original vocal patterns and so on, but it would have sounded like garbage anyway due to the production. It's just too thick and clear and does not suit the music, at all.

Of all the Darkthrone clones out there, this one just isn't worth bothering with. Pest would later go on to make some decent music, from time to time, but Desecration was a swing and a miss, completely. Even people that don't mind total copycat bands should avoid this, as it is quite boring and mundane.
Posted by Noctir at 11:30 PM 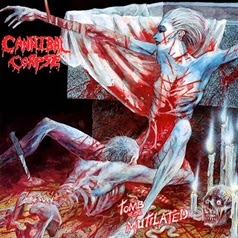 Tomb of the Mutilated, released in 1992, very well may be the most well-known and beloved album from Cannibal Corpse. This is quite unfortunate as, even for this band, it is far from the best of their early works. It has its moments, but too many negative things drag it down.

To begin with, the vocal performance by Chris Barnes is terrible. His voice is much deeper and more guttural than before, lacking any feeling whatsoever. As opposed to the evil, risen-from-the-grave ghoul from Eaten Back to Life, he just sounds like someone vomiting into a toilet bowl and capturing the sound on tape. It does not to evoke a feeling of death or horror. It's just another percussive instrument, on an album that has far too much of a percussive sound as it is. Occasionally, he lets out a raspy scream, though these moments only prove that he could have done better and just chose not to.

The songwriting is not as good as that of either Eaten Back to Life or Butchered at Birth. There are far too many plodding, mid-paced riffs that really do nothing but serve as a background for the horrible vocals. The thrash influence seems to have completely died by this point, as well. There are some decent faster-paced riffs, but the wretched production has them buried beneath the percussion. Nonetheless, Tomb of the Mutilated does possess several memorable parts, found in tracks like "Addicted to Vaginal Skin", "Necropedophile" and "The Cryptic Stench". Things gradually improve throughout the course of the album, with the riffs creating a bit of a dark and morbid atmosphere, despite all the rest of the elements that are actively working against this. Some of the guitar riffs from songs like "The Cryptic Stench", "Entrails Ripped from a Virgin's Cunt" and "Post Mortal Ejaculation" really could have been expanded upon and worked into better, darker songs. As for the latter, it features the best moments of the whole record, with some riffs that might have been better suited for Black Metal. The break near the end, with the guitars standing alone and then a high-pitched cry and the blasting drums coming back in... this small part of the song possesses the darkest feeling and shows a bit of potential. Ever since my first time hearing it, so many years ago, I've felt like they could have done so much more with that section and with this album, in general.

The lyrics are a point of interest for many, and in this regard Barnes did quite a good job at conjuring up a variety of unsettling images and scenarios. While many have attempted to write rather disgusting lyrics, often just to outdo the next band, Barnes comes across as genuinely disturbed and that does add to the atmosphere of the record, to an extent. The lyrics would have had more of an impact had he chosen to utilize a more raw and decipherable vocal style, however.

The production is a definite step down from Butchered at Birth. The bass and drums are far too high in the mix, giving the overall sound a really weird vibe. The guitars do not possess the same kind of tone as on the previous two albums, somehow feeling weaker. The poor mix only emphasizes this even more. The vocals are probably mixed about as well as possible, given the circumstances.

In the end, Tomb of the Mutilated could have been much better than it is. A different vocal approach, and a production job that was less percussive, would have done quite a lot for the album just as it is. As well, some of the more boring riffs could have been scrapped. Despite all the setbacks, Side B showcases some rather decent material from Cannibal Corpse and certainly beats the hell out of anything they have done in the past twenty years. There's much better old school Death Metal out there, but this is still worth a listen if you're a fan of this band.
Posted by Noctir at 7:54 PM