Orlok - In Spectral Castles of Thy Horned Emperor (2015) 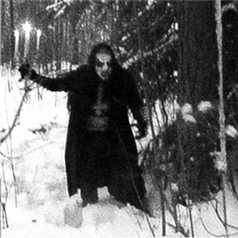 After having just discovered the band, it was a pleasant surprise to discover that Orlok was releasing an E.P. in September 2015. Black Funeral Holocaust made a very good impression on me and so there was a good deal of anticipation in hearing In Spectral Castles of Thy Horned Emperor. It did not fully turn out as expected, but is still a decent recording and is worth a listen for those into raw Finnish Black Metal.

The first thing that I noticed was the increased distortion, all around. The sound is very muffled, for the most part, making it a little difficult to decipher some of the riffs. Even more detrimental is the fact that the vocals are almost completely drowning in reverb (or some similar effect). Perhaps, Graf Werwolf was aiming to achieve a very decayed and ugly result with the music, this time around. If so, he certainly succeeded. As opposed to Black Funeral Holocaust, there is not a lot of atmosphere to this recording. There is still a detectable Mütiilation influence, mostly from the palm-muted riffs in the title track. Otherwise, it is nearly impossible to get through all of the ringing and static that clouds these two songs.

In Spectral Castles of Thy Horned Emperor is better as a collector's item for fans of Werwolf's work, I would say, and serves as more of a rehearsal-type recording. It's not bad, but it is not exactly essential. Hopefully, another full-length is forthcoming and shall return to the morbid brilliance of Orlok's debut album.
Posted by Noctir at 1:39 PM 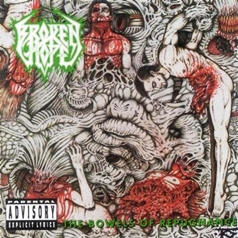 Broken Hope's sophomore full-length, The Bowels of Repugnance was released on Metal Blade Records in September 1993. It builds on the sound that they created with their debut album, while streamlining things a bit. Though my introduction to the band came with a dubbed copy of Swamped in Gore, this was the first one that I was able to find in a store. Overall, it's not quite as good, but still a solid record.

The Bowels of Repugnance often relies more on the blastbeats and sections with the rolling double-bass, emphasizing these elements moreso than on Swamped in Gore. Several of the songs are quite brief, compared to those on the previous record, and utilize the aforementioned techniques. Yet there are still plenty of old school Death Metal riffs to be found here, even in these little snippets of violence. "Coprophagia" and "Remember My Members" begin with a lot of blasting and guttural vocals, but soon regress toward the primitive. Regardless of the 'filler' tracks, this record still offers a good amount of pure Death Metal riffs. Songs like "The Dead Half", "She Came Out in Chunks" and "Hobo Stew" owe a lot to the band's 80's roots. The latter even features some fairly sombre solo work. Even "Preacher of Sodomy" begins with dark riffs that evoke the spirit of early Slayer or Death. "Waterlogged" is a rather memorable track that relies on a certain type of groove, so it is likely to be one of the first songs that those new to the band can digest. "Drinking the Ichor" is a melancholic instrumental piece that is kind of reminiscent of Metallica's "To Live is to Die". The final track is another worthy mention, "Felching Vampires" is well-constructed and consists of typical old school riffs and builds a sense of tension at times. With raspier vocals and less double-bass, this would fit well on an album from '88 or '89 with ease. Also, don't get confused by track six, which is an unlisted (and obviously untitled) instrumental.

Like with Swamped in Gore, The Bowels of Repugnance has more of a deep, percussive sound. Nevertheless, there are still enough decent riffs to be found on here, making it Broken Hope's last worthwhile offering. Death Metal was, more or less, dying by this time anyway, so the decay in quality is to be expected. Either way, for solid American Death Metal, don't neglect the band's first two records.
Posted by Noctir at 9:20 PM 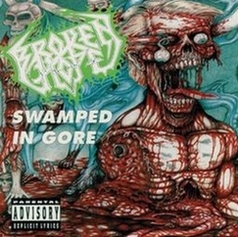 Oddly enough, Broken Hope was one of the first Death Metal bands that I ever heard, after the likes of Cannibal Corpse and Deicide. Their first full-length, Swamped in Gore, was released in November 1991. Despite this, there is still a clear late 80's feel to much of the material and it certainly belongs to the old school Death Metal category.

Among the first things that one might notice upon listening to this record are the very deep vocals that I always described as sounding like some creature gurgling from a toilet bowl. Joe Ptacek's voice can be compared to the style Chris Barnes utilized on Tomb of the Mutilated, or even just a deeper John Tardy. While it was not yet so common, and definitely stands out, my personal preference leans more toward the raspier vocals that previous bands used. The deeper the vocals, the less effective they are in really conveying anything, in my view. Some Reifert-like screams would have helped. That said, they fit in with the music, very well.

As for the songwriting, it's more dynamic than one might expect. It's not technical or progressive, thankfully, but these songs are rarely monotonous. Don't allow the opening moments of "Incinerated" or "Dismembered Carcass" to fool you into thinking Broken Hope is another pointless blastbeast-ridden grind band. While there are those elements, Swamped in Gore is all about the riffs. Whereas a lot of Death Metal became incredibly bland and formulaic around this time, the riffs on this album are by no means interchangeable or generic. Many of them are quite memorable, such as those in the title track, "Awakened by Stench" and "Cannibal Crave". These riffs possess a darker 80's vibe hearkening back to early works from Slayer, Possessed and Death. Here and there, one will also notice bit of Celtic Frost-influenced mid-tempo stuff as well. The guitarists manage to slip in a few evil-sounding lead solos, reminiscent of Hell Awaits, which really adds to the atmosphere. Nothing here can be called groundbreaking or original, but it is very solid and stands on its own.

The guitars are clear enough, but they definitely have a dirty kind of sound that belongs to the previous decade. This certainly is not a demo-quality recording, but it's not modern or plastic either. Honestly, it sounds as if it could have been recorded a few years earlier, alongside something like the first Asphyx E.P. Still, it does lack the raw guitar tone of albums such as Slowly We Rot and Consuming Impulse and sounds a little more polished than the old Autopsy records, for example.

While the vocal style is not my favourite, and a couple of the tracks are a little longer than they need to be, Swamped in Gore is a great old school Death Metal record and one of the best that came from the US in this period. Broken Hope may have been a second or third-tier band in the states, but this album is one that deserves to be heard. Fans of early Obituary, Asphyx, Incantation and Cannibal Corpse, etc. are likely to appreciate this.
Posted by Noctir at 7:05 PM 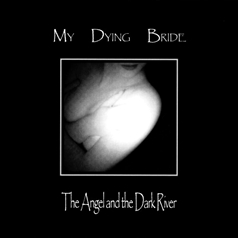 Released in May 1995, The Angel and the Dark River is the third proper full-length from My Dying Bride. Unfortunately, the band continued to shed any traces of their Death/Doom roots and what is left is just a miserable, swirling mass of writhing agony and suffering. While this represents a further decay of what the band used to be, it still possesses a few useful qualities.

Musically, this record is loaded with a fair amount of slow, sombre riffs that just drain the life right out of you. This is accentuated by the clean vocals, which sound bereft of any glimmer of hope. While Aaron's voice does suit the music, one cannot help but miss the powerful growls from previous recordings. Eliminating this aspect from the band's sound, as well as the addition of the piano bits, really softens the music and makes it more one-dimensional. It would have been more effective to retain the harsh vocals for certain parts and to use the clean voice for the more melancholic passages. Perhaps, the monotony is intentional, but as a fan of the older material I find this to be rather disappointing.

That said, the droning melodies and half-dead voice of "The Cry of Mankind" do create a truly bleak atmosphere. The outro bit does seem to drag on for several minutes too long, however. "From Darkest Skies" is one of the better tracks on here, its main riffs dripping with grief, helped along by the sorrowful violin. There is also some use of a funeral organ, later in the track, which is a nice touch. Harsh vocals would have really benefited the heavier parts of the song. "Black Voyage" and "A Sea to Suffer In" each contain some decent riffs that could have been utilized in a better manner on previous records, but here seem to function as mere filler. The latter, in particular, just comes off as far too soft and lacks the gloom of the former. "Two Winters Only" is a dreary track, one which I thought was quite miserable years ago, but now find it to be too soft and 'pretty'. As for "Your Shameful Heaven", it is the most lively song on the album, but the clean vocals don't work with these more aggressive riffs. Quite frankly, it's a mess.

My copy of this CD also includes the bonus track "The Sexuality of Bereavement", recorded during the Turn Loose the Swans session. As such, it possesses a completely different sound and really demonstrates how far the band had fallen in just a year or two. The riffs are heavy and dark, still giving off a strong doom vibe, while the violin creates a sense of melancholy. Meanwhile, Aaron utilizes his very distinctive growls to add a sinister edge to the overall atmosphere. Putting this song on here was a massive blunder, in my view, as it absolutely crushes everything else on the CD and reminds the listener of how much better the band used to be.

My Dying Bride manages to deliver some depressive and sorrowful material here, but one cannot deny that The Angel and the Dark River could have been much better. When a bonus track, recorded just two years earlier, outshines the rest of the compositions, it is clear that the band has become a disappointment. The choice to eliminate the harsh vocals, and to opt for the softer songwriting in general, certainly alienated a lot of fans and made for quite a lackluster release. By this point, these guys should have just packed it in and called it a day.
Posted by Noctir at 3:27 PM