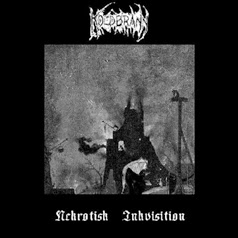 Released in April 2003, Nekrotisk Inkvisition is the first full-length album from Norway's Koldbrann. Though there seemed to be a bit of hype for the band, at least at one point, there is nothing all that exceptional to be found here. This record offers rather average Black Metal that too often ventures into the modern style.

Truthfully, any mystique surrounding Norwegian bands was lost a couple decades ago. With the great multitude of bands that have spawned since the classic era of Mayhem and Darkthrone, the majority have been complete duds. Younger people may not know any better, but long gone are the days when simply hailing from the frozen north carried any sort of weight.

Musically, Koldbrann does not offer anything particularly engaging. Many of the riffs sound like something that Euronymous probably threw by the wayside when writing material for De Mysteriis Dom Sathanas. That said, Nekrotisk Inkvisition fares rather well when put up against contemporary albums from Norway. The guitar sound has a grittiness to it that suits the songwriting. Some of the riffs do possess a kind of dreary and bleak feeling, but they never fully get off the ground. As often happens with modern recordings, the drumming is louder than it should be, but this is only a problem during the sections that embrace the more modern machine-gun approach. As for the rest, only the cymbals prove a little distracting. The most enjoyable parts of this album are the rather straightforward bits that pay homage to those that came before. While Koldbrann fails to add their own unique stamp to the music, they are competent as what they do.

Nekrotisk Inkvisition is not horrible, but it comes off as rather pointless. All of this sounded much better the first time around, at the hands of Darkthrone, Mayhem and Burzum. The trip down memory lane would have been more pleasurable with less modern touches to the production. Koldbrann would do well to look to Finland and bands like Horna, Clandestine Blaze and Sargeist (whose debut album, Satanic Black Devotion, was released a few months later) for an example of how to keep the old traditions alive while still managing to add something unique to the mix.
Posted by Noctir at 11:07 PM