Vampyric Blood - Drowning in the Vampyric Sacrament of the Immortals (2012) 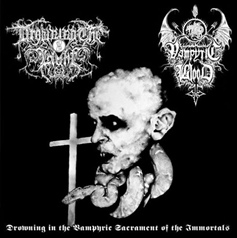 Released in early 2012, just a short time before Ordo Dracul, this split features three songs from the occult Finnish Black Metal project known as Vampyric Blood. The other band featured here is inferior and unworthy of mention. Despite such an unwanted presence, this recording is still notable for the contributions of Lord of Shadows.

The sound is similar to that of the band's debut L.P. in that it possesses somewhat of a distant and cacophonous sound that might take a few moments to adjust to, much like any old '90s demo tape. The guitars and vocals are rather raw and harsh, in contrast to the warmth and clarity of the synth parts. Generally, I dislike keyboards, but I don't mind them if used properly (and sparingly). Overall, the sound here really suits the atmosphere and style of the material.

The first two Vampyric Blood tracks, utilize fast-paced tremolo riffs, while still managing to include slower sections within each song, particularly the former. Of the two, "Grim Tyranny" really seems to stand out and is the most varied track on here. It does well to seamlessly transition between the mid-paced riffs and the faster guitar melodies, making for a rather engaging song, while never losing the lugubrious aura. However, the third composition from Lord of Shadows is the best one on here. "In Sorrow & Misery" is an eight-minute dirge that really lives up to its title. While alternating between open-arpeggios and faster tremolo picking, both the overall melody and drumming dictate a slower pace. This woeful track reaches right into your chest and takes your weakened heart within its strangling grip. The style hearkens back to older works from Burzum and Strid, possessing an unquestionably morose atmosphere.

Though Drowning in the Vampyric Sacrament of the Immortals was limited to 1000 copies, it's probably that one can still track down a copy. Whether or not you are a fan of the other band on this split, the Vampyric Blood material is well worth hearing, especially "In Sorrow & Misery". This is some of the best raw and gloomy Black Metal that I've heard in ages, so it is very much recommended.
Posted by Noctir at 1:33 PM