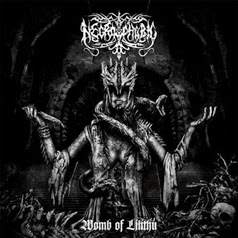 When preparing to review this album, the first thing that I noticed was that it was supposedly dedicated to David Parland. I have to wonder why they would bother with such an empty gesture, when neither Tobbe nor Sterner cared anything about what their former bandmate and friend had been going through for so many years. Many times, David was upset by the fact that Sterner would hardly ever bother to reply to his calls or emails. At one point, he was so glad at the prospect of reuniting with these two, to work on a song for the re-release of Hellspawn's Bathory tribute, In Conspiracy with Satan. Yet, as usual, Sterner suddenly couldn't be bothered to respond to him. He also had no response for me when, months before David's passing, I'd contacted him to let him know that things were not good and that his old friend needed help. Being in New York at the time, I didn't know what else to do to help, other than trying to contact people that were closer and would (I thought) surely have cause for concern. Knowing that Tobbe was a bit more friendly with him, whenever they did speak, I'd contacted him several times between 2009 and 2013, urging him to get in touch with David, even if just to hang out and show some support and friendship. Mr. Sidegård, much like his bandmate, couldn't be bothered to care. Even when writing to their old (and now current) vocalist Anders, he merely said, "I'm sure he'll be fine" and went about his business. So the fact that these guys would dare to dedicate their new album to David, after showing such blatant disregard for him when he was actually alive, is completely disgusting and shameful.

Womb of Lilithu was released in late October 2013 on the trendy Season of Mist label. Though fans of Necrophobic have grown accustomed to the long wait between albums, over the past decade, it has usually been worth it. Not so, this time. In the four years that passed since Death to All, they lost the very talented duo of Sebastian Ramstedt and Johan Bergebäck. The best they could come up with was to replace them with a former member of Unleashed, who does not fit in at all. However, he is not the only one to blame as the two core members were out of ideas long before this abomination was ever written.

Clocking in at over an hour, this is a very tedious listen. Not so much because of the length, but because the material is just awful. Half of it consists of recycled riffs from Bloodhymns and Hrimthursum, with the other half composed of really awkward and out-of-place songwriting that does not belong on a Necrophobic album. Honestly, once the novelty wore off, even Death to All wore thin, with only a handful of tracks worth keeping. With Womb of Lilithu, so much of it sounds familiar from the very first listen. Even worse, it was done better the first time around. The band seems to be creatively bankrupt, at this point. Beyond the fact that is sounds as if they are plagiarizing themselves at various points, the music just isn't very good. Most of it blends together and leaves no real impression, except the parts that stand out for all the wrong reasons. The majority of this consists of a bunch of interchangeable Black or Death Metal riffs that have no feeling and serve no purpose. There is no darkness nor true aggression. Gone are the hauntingly sombre lead solos that the band had long been known for, replaced with a happier sound that is reminiscent of Iron Maiden, which creates a stylistic clash. There are also some that seem to be going for some weird Middle Eastern vibe, but more on that later. The songs just get worse as the record progresses, with Tobbe seeming to rap by the seventh song, to go along with the horrible groove. However, the real lowpoint of the record may be the track "Opium Black". It begins with some pathetic gotic Rock, similar to modern Tiamat, complete with horrible clean vocals. This has Sidegård's fingerprints all over it. If he had not already been ejected from the band for being a scumbag wifebeater, I would say that someone should tell him to keep these lame ideas for his worthless side projects. By the end of the album, more rehashed ideas appear, followed by a melodramatic outro.

Lyrically, this foul recording falls deeper into the Middle Eastern nonsense that seems to have so completely infiltrated the minds of many in the Swedish metal scene, in the last several years. At times, it is as if they are trying to see how many references to qliphotic this and chaotic that, Lilith, Thaumiel, etc. that they can fit into each song. There is nothing even being said, rather, it's often just an exercise in reciting various names and terms with no purpose, much like the music itself. This idiocy has nothing to do with real Black or Death Metal, much like the music on this album. Anyone that thinks otherwise needs their head checked.

The production is even worse than the last record, meaning completely modern and clear and overdone. Everything is mixed improperly, with Joakim's boring (yet oddly overactive) performance pushed to the front. The bass is too audible as well, which is very rarely a good thing. The guitar tone is weak and lacks even the faintest hint of rawness. Even the vocals are worse than before, with the various modern-sounding effects that are frequently used. The clean backing vocals and Tobbe's annoying vocal rhythms don't help things. There is no real reason to criticize the production too much, as even the most raw and necro sound possible would have failed to hide the wretched and laughable songwriting.

Womb of Lilithu is the worst thing Necrophobic has ever released. Bands like Shining are often quoted as saying that they want their fans to commit suicide; all they have to do is make an album like this and listeners will be killing themselves in droves. I'd rather cut my throat and bleed out than to ever again have my ears so thoroughly polluted by such atrocious filth. While Death to All was rather formulaic at times, this actively defecates on the legacy created by past works such as The Nocturnal Silence and Darkside. Though Joakim has recruited their old vocalist, Anders Stokirk, it is unlikely that they will do anything worthwhile unless the songwriting is turned over to someone worthy of following in the footsteps of David Parland or even Sebastian Ramstedt. At this point, it's time to call it quits. Even the live performances are lackluster and one can tell that they are just going through the motions. Avoid this album and anything else this band does, from now on.
Posted by Noctir at 2:56 AM