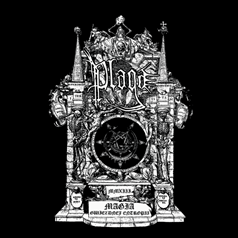 Plaga hails from Poland, though one would never know it just by listening to them. These guys play a modern style of Black Metal that is very derivative of Swedish bands of the past decade or so. After a lackluster demo and mediocre mini-album, they went back and refined their sound a bit. Released in April 2013, Magia gwiezdnej entropii has gotten a fair amount of attention from younger listeners. While they have made some improvements, this leaves a lot to be desired.

Musically, Plaga has nothing to do with those Polish bands that preceded them, such as Graveland, Infernum or Veles. The songwriting here is immensely influenced by modern Swedish Black Metal acts, primarily Watain and Ondskapt. This is undeniably obvious from the first moments of the album. Nearly everything, from the shouted vocals to the melodic guitar riffs, has been plagiarized from their northern neighbors. Even the lyrics offer nothing more than another rehashing of the same faux-evil Orthodox themes of the aforementioned bands. The production shares the clarity of Dödens Evangelium, not sounding so slick and polished but still possessing an overall loudness and claustrophobic mix that boldy marks it as modern. With all that said, there are some decent riffs on Magia gwiezdnej entropii. The best moments are when they go forth at a fast tempo, unleashing cold tremolo melodies that would not be out of place on Casus Luciferi. However, any momentum that they build is quickly lost. "Slaying the Spiritless Abel" features a lot of melodic riffing and stripped down drumming, somewhat reminiscent of Merrimack's Of Entropy and Life Denial, which clearly shared the same inspirations.

One strange thing about the songwriting, and quite likley the main reason that this band appeals to so many people, is the simplistic playing. Though they utilize these tremolo riffs, the overall rhythm and the drumming of songs like "Trąby zagłady cz. II" and "Śmierć cieplna wszechświata" is often more rock-based and catchy, which is a detriment to the purity of the material. Surely, it is much more easy to digest and will attract more listeners, but the atmosphere is considerably less dark when such elements are involved. And though even Burzum resorted to similar rhythms, Darkthrone's Transilvanian Hunger later showed that the most bleak and pitch-black feeling was to be achieved when Black Metal fully transcended its Heavy Metal and even the earlier Rock and Roll roots, embracing total minimalism and falling into the dark abyss created by the cold and grim guitar melodies.

Magia gwiezdnej entropii possesses the aesthetics of something far more underground and necro, so it may come as a disappointment to some when they find so much melodic and catchy songwriting instead. This record offers moments where they hint at something a little darker, but they fail to ever delve to the necessary depths to produce this. Like Mgła, Plaga's material will surely be enjoyable to those with less demanding taste, but this modern breed of Black Metal pales in comparison with those that came before. Give a listen to the new Clandestine Blaze to hear someone doing it right.
Posted by Noctir at 5:38 PM 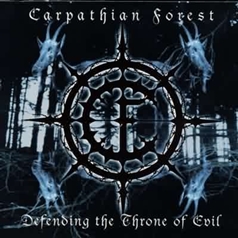 Released in the autumn of 2003, Defending the Throne of Evil is the fourth full-length from Norway's most notorious underachievers, Carpathian Forest. There are a lot of things that can be said about this band, whose only true consistency lays in the inconsistency of their output. Despite emerging from the birthplace of Mayhem and Burzum, these guys have a lot more in common with Venom. For one, their recordings suffer a drop in quality from one to the next, yet they were always a very powerful and energetic live band. Therein rests one of the main problems for Carpathian Forest, as it really seems that they cared more for tossing together a collection of tunes and then hitting the stage with a few new additions, rather than putting forth a great amount of effort toward making memorable albums, in and of themselves.

Defending the Throne of Evil marks the first release since the departure of Nordavind. This may account for the lack of attempts at atmospheric material. "The Well of All Human Tears" is a fairly decent mid-paced track, but does not come close to "Journey Through the Cold Moors of Svarttjern". The songwriting here is more straightforward, though the synth is still ever-present. This album sounds even more polished and modern than the previous records, a problem that worsened over the years. The truth is that the slick production matters little when the majority of the songs had minimal potential to begin with. The best track on here is "It's Darker Than You Think". This is both the most enjoyable and the most frustrating song on here. To address the latter, it's simply the fact that this track demonstrates what Carpathian Forest was capable of, when actually putting forth effort. Unfortunately, this is not something that they could often be bothered to do. At any rate, the tremolo melodies and vicious vocals of the chorus section show a band that is capable of doing something decent, but they utterly fail to capitalize on it. Nattefrost's voice deserved to be utilized for a much better project than this and is, in fact, one of the only good things about this L.P. The rest of the songs run the gamut from mediocre to the absurd, even going so far as to include saxophone bits to seem experimental and progressive.

Defending the Throne of Evil is another example of horribly modern and generic 'extreme metal'. Here, Carpathian Forest just throws together Black, Death, Thrash and Doom riffs with no real direction. This is just generic nonsense with slick production no purpose or meaning, even more useless than Morbid Fascination of Death. Thankfully, this was one of the final abominations to come from this band. If you're looking for real Black Metal, avoid this.
Posted by Noctir at 1:44 AM 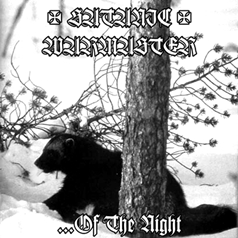 ...Of the Night is one of the very best recordings from Satanic Warmaster. Released in 2004, this E.P. features only two tracks yet clocks in at over twenty minutes. The material presented here is built upon the themes established on Opferblut, then expanded to create something more epic. The end result is a very strong offering from this Finnish Black Metal band.

From the opening chords of the title track, an atmosphere of melancholy unfolds. There is a cold, nocturnal feeling that is carried forth, very much suiting the title of the song. After a minute or so, a haunting tremolo melody emerges from the darkness and freezes the blood in your veins. This is the sort of riff that has hardly been heard since the era of classic Burzum. With the production's focus on highlighting the guitars, there is nothing to hinder the eerie and sombre effect of these brilliant melodies. The repetition also works well to create a somewhat hypnotic feeling. About halfway through, the song shifts from unsettling darkness to a very mournful and grievous vibe that is reminiscent of "A Raven's Song", from Opferblut. "Chronicles of Thy Astral Blood" does well to follow up on this, consisting of mid-paced drumming and melancholic riffs accompanied by tormented screams. Again, one can sense the shadow of Count Grishnackh hovering over the cold winter landscape; however, this results from a discernable influence rather than the outright plagiarism that some bands attempted.

It is safe to say that ...Of the Night is the second best release from Satanic Warmaster, ranking just under Opferblut. Though has Werwolf chosen to craft an entire full-length in this style, it may have even surpassed the aforementioned album as the greatest of his works. While later records were often questionable or inconsistent, this one hits the mark and is recommended listening for those into raw and mournful Finnish Black Metal.
Posted by Noctir at 6:53 PM 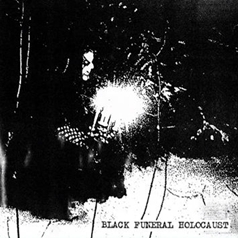 Released in mid-October 2013, Black Funeral Holocaust is the debut full-length from Orlok. This is raw Finnish Black Metal with a strong influence from the LLN, especially Black Murder and Mütiilation. This solo project is yet another from Graf Werwolf, of Satanic Warmaster, and may edge out Opferblut to rank as the best thing he has ever recorded. In fact, it is near the top of a very short list of albums from recent years that are even worth listening to.

Black Funeral Holocaust consists of seven tracks, three of which are sombre instrumental pieces that are well-placed to add an aura of horror and despair. The remaining four songs still manage to clock in at nearly half an hour, each working well to drag the listener deeper into the abyss. From the opening moments of the title track, one is taken back two decades, to a time when Black Metal possessed a more genuine feeling. The production is lo-fi, but still allows for all of the mournful riffs to be discerned, resting just above the Mütiilation demos in terms of quality. Speaking of that unholy cult, traces of Meyhna'ch's influence can be heard throughout the album's entirety, including some rather claustrophobic palm-muted riffs that are very reminiscent of Rites through the Twilight of Hell. The bulk of this L.P. is made up of very bleak and dreary tremolo riffs with fast-paced drumming that is hardly perceptible. The decision to bury the drums deep into the damp soil and to allow the guitars to be the dominant instrument was a wise one. As such, the hypnotic guitar melodies are better able to lure the listener away from reality for a while and into a nightmare of torn flesh, blood-stained crypts and a black hopelessness that rarely ever adequately conveyed through Black Metal, these days. The vocals stray a bit from what some may be used to, as Werwolf utilizes a less-refined and more savage approach, almost sounding as if he was half-rotted and recently risen from the grave. Throughout the record, there are instances of multi-tracked vocals that hearken back to the old Vlad Tepes demos, yet here it serves to give the effect of a chorus of hellish demons. The songwriting is varied enough that each track is able to stand on its own, yet the effect is still best when listened to in full. The melancholic vibe that permeates this album comes off as more of something that is being inflicted upon the listener, rather than as expression of the artist. In that sense, there is something more sinister about this.

If you worship the likes of Feasts, from Black Murder or Mütiilation's demo material, you should definitely give this a listen. Of course, Werwolf cannot be accused of doing anything magnificently original with Orlok; his influences bleed through in an obvious manner, especially the cold, Transilvanian Hunger-inspired bits in "Black Hearts Symphony" or the overt nod to Mayhem's "Freezing Moon" found on "Mysticism Corpus Satanae". Yet the brilliance of Black Funeral Holocaust is the manner in which all of these elements are put together to create a cohesive and meaningful whole. This is highly recommended.
Posted by Noctir at 2:58 AM