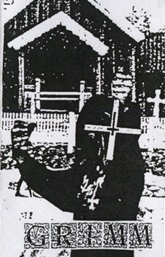 Grimm was a Black Metal project that hailed from Norway and released only a single demo before disappearing. I've seen some claim that Grimm was a precursor to Carpathian Forest, though in actuality the latter was already established and had recorded three demos before the former was even formed. It would seem that Nattefrost, Nordavind (credited as Lord Nosferatu and Lord Karnstein, respectively) and others were simply session musicians on the Nordisk Vinter demo, which saw the light of day in September 1993.

This brief demo starts out with a horror-inspired intro, featuring demonic voices and weird keyboard effects. It runs a little longer than necessary, but doesn't really hurt anything. As for the two primary tracks, the songwriting is very similar that found on Carpathian Forest's Through Chasm, Caves and Titan Woods. The style is rooted in old school Black Metal, with a definite Hellhammer/Celtic Frost influence heard on "The Embrace of the Cold". "Born in the Hands of Doom" is a slower-paced track that has more of a Norwegian vibe to it, reminiscent of early Emperor and leaving the power chords behind in favour of cold tremolo picking. There is also a small shift in the vocals, utilizing a more tormented sound. Both include small bursts of hellish lead solos, here and there, hearkening back to Hell Awaits. The sound quality is pretty decent for a cassette demo. The guitars possess a raw edge and are definitely the central focus. The drumming is certainly audible though never overpowering the rest of the music. The old school style, lacking blast beats, also accounts for some of this. The vocals are definitely one of the best things about this recording, as Nattefrost's sinister voice is really suited for this sort of material. I've said before that he never realized his full potential as a vocalist with the modern production and experimental songwriting that plagued must of his main band's output.

Nordisk Vinter is a really good demo, though much of that has to be thanks to the involvement of the Carpathian Forest guys, particularly Nattefrost's vocal contributions. Had Grimm evolved into a real band and released more music, with different members, it likely wouldn't have been as good as this. So often I end up saying that it's a shame that this or that band didn't continue on, but sometimes a little one-off recording is enough. Such is the case with Grimm.
Posted by Noctir at 9:53 PM 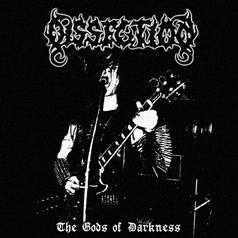 Originally released as a split VHS with the most unworthy Dimmu Borgir, The Gods of Darkness features one of the final gasps of the true Dissection. Recorded live in Köln, Germany on 31 March 1997, this performance is just as solid and possibly even more complete than the one on Live Legacy. The original release included bits of an interview between each song, as well as a video for "Where Dead Angels Lie", none of which are present here. However, the nearly 50-minute live gig is accompanied by three demo tracks from 1994.

For early 1997, the setlist is pretty much what one would expect. It leans heavily on the Storm of the Light's Bane and Where Dead Angels Lie material. Considering the time constraints that were likely in place, they did quite a good job and still managed to include a couple lengthy tracks from The Somberlain. "Black Horizons" has always been a personal favourite, though seemingly often ignored for some reason, so it is a very welcome addition to this performance. Unlike Live Legacy, there were no technical issues preventing the mighty "Night's Blood" from appearing and giving the disc a more complete feeling. It's too bad, though, that they weren't able to squeeze in a couple more songs, like "A Land Forlorn" or "Soulreaper".

As for the quality, this is a professionally-done soundboard recording, so you can hear everything very clearly and there is hardly any noticeable crowd noise (even during the quiet parts). That said, of course live renditions of these songs could never completely match the cold sound of the studio albums. That is actually a good thing, here, as it would be rather pointless if they were to mechanically reproduce everything with no variation. A massive part of the charm regarding The Gods of Darkness is the more raw feeling that it possesses. Slight differences in guitar tone, Jon's vocals and even Kellgren's drumming all come together to give a slightly different perspective on these classic songs. It's all a bit more organic, and you can really sense the energy and passion that the band puts into the songs. It must be said that the drumming does not seem quite as crisp and accurate at times, but it is surely difficult for most to match Öhman's talents.

The bonus material consists of three unreleased demo tracks from 1994. Though the differences between these and the proper album versions are rather subtle, they are enough to create a somewhat unique atmosphere. The backing choir found near the end of "Retribution - Storm of the Light's Bane" accentuates the gloomy feeling of the song. The primary difference would be the more primal and vicious vocals, sounding less restrained and with a somewhat shrill tone at times. Some of the extended screams of "Night's Blood" just somehow adds so much.

Much like Mayhem, Dissection existed in its classic form all-too-briefly and its output was rather limited. As such, fans must cling on to any and all recordings of these songs, hanging on every detail and nuance. The sound quality is excellent and beats the hell out of other bootlegs, such as Night's Blood. The Gods of Darkness is a perfect companion piece to Live Legacy and offers a more raw and intimate look at this legendary Black Metal band and is absolutely essential listening.
Posted by Noctir at 9:41 AM 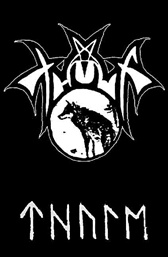 Taake was never a band that particularly impressed me. In fact, Nattestid... was actually rather irritating, despite the praise heaped upon it by others. The bits and pieces that I heard of the two albums that followed did nothing to change this impression. At some point, I decided to pick up the Helnorsk svartmetall compilation, though it also seemed rather lackluster. That is, with the exception of the last two tracks, which were taken from the first Thule demo. Released in 1993, Der vinterstormene raste is easily the best thing that Hoest has ever had a hand in.

The opening moments of "Et Skaldekvad I Hellig Blod" seem somewhat upbeat, before the catchy rhythm is replaced by a cold and mournful tremolo melody. This is quite typical Norwegian Black Metal, for this period. The riffs are pretty similar to what one would hear from the early demos of Gorgoroth, Enslaved or Urgehal. The lo-fi recording really helps to lend a grim and gloomy atmosphere to the music. Despite the demo-quality sound, the bass is audible and provides a contrast to the cold guitar tone. The combination of the frigid tremolo riffs and sombre bass lines really serves to create a dismal feeling. Near the end of the first track, as the pace slows, the misery washes over you in overwhelming waves. Hoest's vocals are utterly inhuman shrieks, very high-pitched and adding a primal feeling to the music. Svartulv's backing vocals add a hellish vibe as well. The second track, "Rasekrig", continues to build on this harsh and melancholic feeling, with blistering cold sections that give way to dark and dreary melodies that carve through your flesh and leave you to bleed out in the frozen night.

Der Vinterstormene Raste is such a great demo, really epitomizing the sound of classic Norwegian Black Metal. The music here is cold, bleak, evil and otherworldy; things that have so often been lost on those that try to emulate this style. It is difficult to fathom why Hoest decided to abandon this approach for the more pretentious sound of Taake, for there is just a sense that this was but a harbinger of things to come. As previously stated, these tracks are available on the Helnorsk svartmetall compilation, so they shouldn't be too difficult to find. This is well worth a close listen.
Posted by Noctir at 9:57 PM