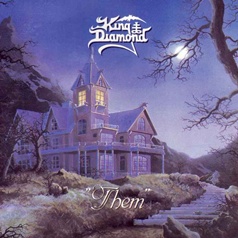 Released in June 1988, "Them" is the third full-length from King Diamond and the first since the departure of guitarist Michael Denner. Though often praised by critics, this is actually the weakest record from King Diamond's classic era. From the songwriting to the theme to the production itself, various elements combine to make this a rather mediocre and forgettable L.P.

"Them" really sticks out like a sore thumb, when compared to the likes of Abigail, Conspiracy and even The Eye. The production is very weak and flat, lacking the power and dynamics of the aforementioned records. Strangely, this sort of sound was used once again, years later, on The Spider's Lullabye. The change in studios was not the only detriment.

As with its predecessor, "Them" is a concept album, but one that really misses its mark. I'm not generally a fan of concept albums in the first place, but Abigail was much better in terms of the story and the songwriting. On that record, each song is still strong enough to stand on its own, musically. However, "Them" seems to contain a lot of filler, only there to serve the dull storyline. As well, King's vocals seem to have jumped the shark a bit, with the range of voices going too over-the-top, especially considering that he is screaming about a mentally-ill grandmother and cups of tea. It's just impossible to take any of this seriously.

Regarding the music itself, the best song on here is "The Accusation Chair". This is the only one on here that I feel could easily stand on its own, apart from the album as a whole. "Welcome Home" and "Mother's Getting Weaker" have their moments, though the chorus (and title) of the latter is just unbearably lame. The rest is just incredibly dull and pointless. The riffs feel interchangeable and there's hardly any real focus. Most of the material on here just serves as a generic backdrop to the idiotic story and plethora of voices. This feels like something that was just thrown together in a hurry.

"Them" has long been overrated by those with a less discerning taste. This represents a real drop in quality from Abigail. When exploring the classic albums from King Diamond, be sure to skip over this one and move on to Conspiracy. There's nothing of value here.
Posted by Noctir at 4:08 PM 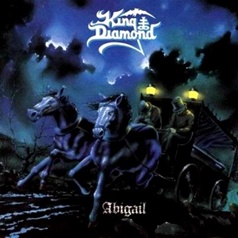 While Fatal Portrait felt, in some ways, to be connected with Don't Break the Oath, the final traces of Mercyful Fate seem to have faded with that L.P. Released in October 1987, the iconic Abigail is often considered to be the definitive King Diamond record. Unlike the previous full-length, the band's second outing is a full concept album, and features minimal input from guitarist Michael Denner, while Andy LaRocque gets a few credits for the first time. For various reasons, Abigail feels like the real starting point for King Diamond's 'solo' career.

The music is very dynamic and goes well with the story being told. The songwriting is brilliant, as is the arrangement. Each idea flows into the next, flawlessly, as does each song, one after the other. Every riff, solo and vocal line is exactly as it should be. King's falsetto style was never again used to such perfection. For some, this can be a dealbreaker and you either love or hate his vocals. For me, his voice is best at a high volume, enough to shatter your skull. He does a great job adding drama to the proceedings, and many of the vocal lines are as powerful and memorable as the riffs themselves. Unlike later albums, such as the awful "Them", each composition is strong enough to stand on its own, rather than only working as part of a greater whole as is often the case with concept albums.

The production is very clear and powerful, suiting this style of music. It definitely lacks the slight murkiness that was present on Fatal Portrait, sounding as if the band had quite a budget to work with. My personal preference tends to lean more toward the debut but, that said, there's really nothing wrong with Abigail. King Diamond's first two records definitely deserve to be considered classics and are highly recommended.
Posted by Noctir at 9:48 PM