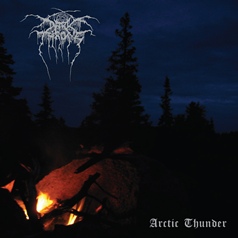 Though I'd intended to ignore the latest release from Fenriz and Nocturno Culto, several have requested my thoughts on this record, so I'll take a stab at it. In general, I'm not one to advocate remaining loyal to a band once they no longer make quality music. However, in the case of Darkthrone, I've been far more lenient and tried to give them the benefit of the doubt. For my personal taste, they've made some of the best Black Metal albums in existence, but those days are long past.

The disappointment began with 2004's Sardonic Wrath, which I found to be mostly dull and quite a drop from its predecessor. Then came the polarizing The Cult is Alive in 2006, at which point I fully gave up on the band for a while. Their new direction grew on me, with F.O.A.D. and Dark Thrones and Black Flags (my personal favourite of this period). I thought that Circle the Wagons was rather weak by comparison. That was followed by The Underground Resistance, which seemed like an improvement at first. The problem is that, other than "Valkyrie" (which is the least Darkthrone-ish of all the songs on that record), I haven't felt compelled to listen to it since the night I wrote my review for it, back in March 2013, which was only the second time I'd listened to it. With regards to that album, my first impression was that of mild disappointment. Perhaps it was out of some sort of loyalty that I tried to find something positive to say about it anyway. Or it could be that it was a fine album, but just nothing worth going back to.

However, with the October 2016 release of Arctic Thunder, I'm hardly inspired one way or the other. After they released the first track, I kept seeing comments online about them "returning to their Black Metal roots". I knew this had to be some form of lunacy, so I wasn't surprised at all to hear for myself that this was definitely not the case. I wonder why people even bother bringing up the old days when talking about a new Darkthrone album. All I hear is the same sort of stuff that these guys have been doing for the last several years, for the most part. A lot of '80s-inspired riffs that don't do much more than to make you want to go back and listen to the old school Metal that influenced this material, as opposed to listening to the album itself. Fenriz refrained from contributing lead vocals this time around, thankfully, but Nocturno Culto's voice has been pretty bad for over a decade now. He doesn't sound quite as awful here, but his performance is still a far cry from those of the past. It's difficult to imagine that it's taken over three years for them to come up with this, much like the previous album. "Tundra Leech" has some decent doom riffs with a tremolo melody on top of it. After the first couple minutes, it sort of loses my attention until the lead solo, which still utilizes the strange tone that they've been using for the last several years. Songs like "Burial Bliss", "Boreal Fiends" and "Throw Me Through the Marshes" feature more generic and forgettable riffs that could have been taken from any random song on the last four or five records. The latter includes some clean guitar parts, reminiscent of "Valkyrie", but far less epic in nature. It reappears, from time to time, giving a little bit of a gloomy feel, but nothing really worth remembering. The solo is similar to the one from "Black Mountain Totem", again hearkening back to Aldo Nova's "Fantasy". Just in case you're wondering, that is not a good thing. "Inbred Vermin" is another song that fails to stand out, until the doom riffs at the end come along to create a sombre vibe. This is completely ruined by the more upbeat title track that follows. "Deep Lake Trespass" begins with a somewhat interesting riff, then crumbles less than a minute in, alternating with generic passages that seem rather disjointed. As for the closer, more random Celtic Frost worship that sounds like it took about two minutes to write.

Arctic Thunder isn't a terrible album. It's not the worst record that Darkthrone has ever released, by any means. In fact, had it been the follow-up to Hate Them, I'd probably look more favourably upon it. But with so few ups and so many downs in the last several years, this L.P. just fails to impress. The songwriting is sort of dull and mediocre. It has its positive moments, but nothing really stands out, sadly. It can serve as a solid album of background music, but there's not much here to hold one's attention nor to justify the three-year wait. They should be able to pump out this sort of haphazard material about twice a year, easily. The latest offering from Nocturno Culto and Fenriz is thoroughly old school and primitive, but it's also utterly forgettable.
Posted by Noctir at 7:31 AM