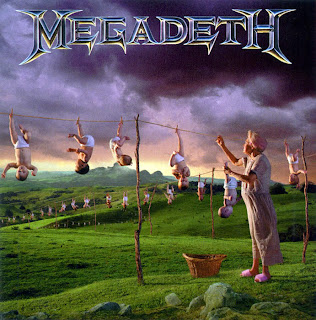 Things had certainly changed by the time Megadeth's sixth studio album, Youthanasia, was released in November 1994. The band had abandoned their Thrash Metal tendencies on their previous album, Countdown to Extinction, in favour of a more traditional (and accessible) sound. Despite the criticism from longtime fans, it turned out to be their most commercially-successful album, ever. So, two years later, there was a lot of pressure to match this feat. As well, it was a time to improve upon that album's shortcomings. Internally, the band was experiencing conflict, which was not much of a surprise, given Megadeth's history. The difference, this time, was that some of the members were becoming greedy and looking at the band as a business venture, being more concerned with profits and less focused on the creative process. Nevertheless, Mustaine and Co. managed to record their final album that would possess any level of relevance (for many years, at least).

I still remember when this came out, and that a couple of the songs were in heavy rotation on the local Rock station. Megadeth did not sound like anything else that found its way onto the airwaves, so the idea of tailoring the album to the musical climate of the period was a little ridiculous in the first place. While not the band's most noteworthy release, Youthanasia has a bit of sentimental value for me, since it was on this tour that I was able to see them play live for the first time. It also seemed like a heavier and better Metal album, regardless of the simplified riffs, and more in line with what one would expect from Megadeth than its predecessor. This was the last album that I picked up from this band, as what I heard from the one that followed it was enough to force me to give up on them for over a decade.

From the opening moments of "Reckoning Day", it is obvious that Dave was looking to make up for the overly clean sound and non-aggressive riffs that plagued much of Countdown to Extinction. The riffs seem like classic Mustaine, just not played with the same energy. The drumming is more relaxed and one can tell that they have no desire to go back to any sort of all-out Thrash assault, but there is a decidedly more Metal feeling present here. The riffs are memorable and the vocal lines match this as well, while still possessing a little anger and power.

"Train of Consequences" starts out with some riffs that are tuned a bit lower than they should be. Again, there is a focus on melody when it comes to the vocals and some of the later riffs. As it progresses, there are some decent moments, but the chorus and earlier riffs actually become tiresome once you've heard the song a dozen times. I may simply be biased due to hearing the song on the radio, constantly, for several months.

The next song, "Addicted to Chaos", is slower and darker. There is a strain of melancholy in the riffs and the vocal delivery. It isn't as overt as a Doom Metal song, for example, but it becomes clearer as the song unfolds. There's something epic and haunting about this, even though it contains softer parts. Whether aimed at reaching a larger audience or not, there was a lot of attention to songwriting for this album, and it paid off. There are a lot of subtle touches that add multiple dimensions to this piece and lend a sense of darkness to the album, overall.

This is followed by the other radio hit, "A Tout le Monde". In all honesty, the song is not so bad, though I also grew tired of hearing this on a daily basis, back in early 1995. It begins with a clean guitar and soon leads into heavier riffs, though with a lot of additional melodies. The lyrics and the music paint a picture of misery, a perfect soundtrack for moving on and leaving the world behind. It does everything that a single is supposed to do; it's catchy and memorable, while still showcasing the band's talent and making people want to listen to the full album and see what lies beyond. The guitar harmony near the end is one of the high points of the record.

"The sleeping feel no more pain..."

"Elysian Fields" is the complete opposite of the song that precedes it. It bursts forth from the speakers and crushes your skull in a way that a Megadeth tune is supposed to; possibly one of the first times since the mid-80s. In fact, some of the riffs on this album hearken back to the slower moments of Peace Sells... but Who's Buying? What the band did on Countdown to Extinction was to drop the intense riffing and put their energy toward making melodic and infectious choruses. On Youthanasia, they continue with that while also allowing the guitars to become more dominant again.

The next song is "The Killing Road", and it opens with yet another classic Mustaine riff. It shows that, had he wanted to go down that path, he could have easily constructed another Thrash Metal classic. In that sense, it is unfortunate that the band had different goals at this point in their career. Either way, this is a very solid song with the catchy chorus section that reminds one of "Psychotron", from the previous album. The solo suits the song, perfectly, and the music remains powerful and riff-driven, even though they opted for a more melodic and trimmed-down approach.

"Blood of Heroes" is another rather short track, clocking in just under four minutes. The pace is a little slower, but the formula is quite the same. Again, there is a sense of sorrow present in the music, without being completely depressing. It is a shame that Megadeth didn't reach the same heights as Metallica, considering the fact that when each band sought to widen their audience, Dave did a much better job of it and actually remained within the realm of Metal, whereas his former bandmates chose to transform themselves into a Hard Rock entity.

One of the darkest tracks on the L.P. has to be "Family Tree". This isn't dark in an evil sense, except when one considers that the depravity of the human mind is capable of much more sinister deeds than most ghouls conjured up by the imagination. The lyrics deal with rape and incest, something all too common in this age. There is something more disturbing when the monsters are not shadows in the closet, but rather those that are in total control of your existence at a young age. The music fits well with the atmosphere created by the lyrical theme and, of course, there is a melodic solo near the end.

The title track hits a little harder, right off the bat, but it's a mid-paced affair that kind of plods along for the first half. However, it's actually not too bad. Around the middle, things speed up a little a very nice lead solo explodes forth, adding some much-needed energy and melody to the song. The slower riff returns to end things, giving off somewhat of a doom vibe.

"I Thought I Knew It All" continues with the sorrowful vibe that is present throughout the album, and features more haunting guitar melodies. The band manages to pull of melodic, catchy songwriting while still retaining the heaviness that they were previously known for and it even seems that Dave stepped up his vocal delivery. His voice has always been somewhat controversial, and at times it could be grating, but he does very well to ensure that his voice matches the music and never detracts from the proceedings.

More typical Megadeth riffs begin the next song, "Black Curtains". It has more of a relaxed feeling, and is short enough to not overstay its welcome. It is not particularly remarkable, but nothing to complain about either. It fits well within the context of the album, but doesn't possess enough positive qualities to really stand on its own.

The record reaches its conclusion with "Victory", which may have been written prematurely. His battles were not even close to being over. At any rate, this is one of the faster songs of the album, about the closest thing one would find to the old material. Interesting enough, it seems like a farewell to the early days, including a ton of old song titles in the lyrics and giving a sense of finality to that period of the band's existence. There's a melodic section in the middle, which seems reminiscent of some old NWOBHM and even the solos remind on of Diamond Head.

Youthanasia was the final real Metal album released by Megadeth, for many years. While some considered this to be a weak effort, it was actually superior to Countdown to Extinction in a variety of ways. The songwriting was stronger, the attitude was nastier and the sound was heavier and more riff-oriented. Everything that they had striven to achieve with the last record, they succeeded at with this opus. This is Megadeth, minus most of the Thrash, but repackaged as a more traditional Heavy Metal band. If you haven't given this a chance yet, do so. It kills anything that followed it and also showed, once and for all, that Mustaine had ten times the musical talent as all of the members of Metallica, combined.