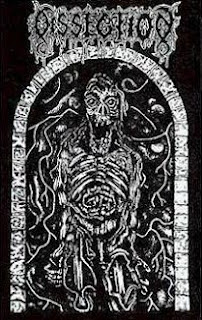 The Grief Prophecy is the first demo release from Sweden's Dissection, being unleashed on the world in 1990. This brief tape was where it all began, so many years ago. The band would go on to become one of the most revered acts in Black Metal history, yet some might be surprised by the sound present on this demo.

It begins with "Intro/Severed Into Shreds". The opening riffs are very familiar, as they later appeared on The Somberlain as the beginning of "The Grief Prophecy/Shadows Over A Lost Kingdom". Whereas, on the album, this intro leads into cold and epic Black Metal, the transition is much different here. "Severed Into Shreds" features a thicker sound, including deeper vocals than most would expect from Dissection. The vocals were somewhat similar to what would be heard, a couple years later, on the first Amorphis album. Musically, it sounds a little like Treblinka and early Tiamat, not really possessing the Death Metal sound that was becoming popular in Stockholm. The song is very mid-paced, through a subdued thrash riff comes along, later on, followed by another tremolo riff.

The next song is "The Call of the Mist". This one begins with a slow and doom-ridden riff. It alternates between slow and fast riffs, sounding fairly similar to the song that preceded it, in sound and execution. There are some decent tremolo riffs to be found, but they're buried beneath the rest and never really expanded upon. It shows promise, but the true genius wouldn't be apparent until the following release.

"Consumed" is the final track, and it's probably the least impressive on this demo. It follows suit with the previous songs, but by this point one gets the feeling that they've already heard this. It's not bad but, as with the rest of the demo, this just isn't what most want to hear when they reach for a Dissection release. There are some nice riffs, later in the song, but they're stuck between more generic ones that may have been more interesting at the time, before a thousand other bands had come along with the same exact style.

The Grief Prophecy shows a band that was still finding themselves, in terms of sound and overall atmosphere. It was decent enough, but Into Infinite Obscurity would be the recording that really put Dissection on the map and displayed what they were capable of. Still, nothing could prepare people for the brilliance that was to come on The Somberlain.
Posted by Noctir at 10:38 PM 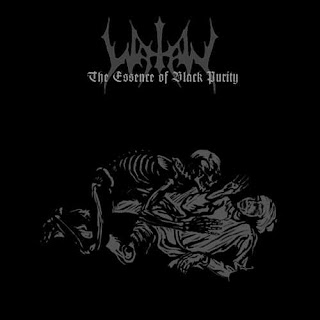 The Essence of Black Purity is the first Watain release after they, apparently, decided to turn the band into something serious and put forth real effort. The prior releases, Go Fuck Your Jewish "God" and Black Metal Sacrifice showed promise, but were mostly just imitations of what had gone before, with production terrible enough to make Transilvanian Hunger sound over-produced. With this E.P., released in 1999, the band made the first step toward creating a legacy of their own.

"On Horns Impaled" starts things out and the first thing that one might notice is that the opening tremolo riff is more easily heard than on the L.P. version. The vocals are also different, being deeper and more gurgled than screamed. The overall production is a little more suitable than what they would achieve on Rabid Death's Curse, as far as allowing the riffs to breathe a little more, but the vocals detract from the atmosphere a bit. Aside from these differences, it's quite similar to the version that ended up on the full-length.

The next song is "The Essence of Black Purity". It begins with a slower riff that possesses a darker feeling, at least in the early moments. The best melody of the song comes about a minute and a half in. It's very memorable and almost seems like something that one would expect on an early Dissection record, or maybe even Cardinal Sin. The vocals aren't a problem on this song, since they never re-recorded it for an album, so there's nothing to compare it to. As such, it's the more enjoyable of the two songs and leaves a fairly good impression.

In the end, The Essence of Black Purity continued the musical progression of Watain, showing that they were beginning to take themselves a bit more seriously and to try harder to find their identity and to create worthwhile music. However, the best was yet to come.
Posted by Noctir at 9:39 PM 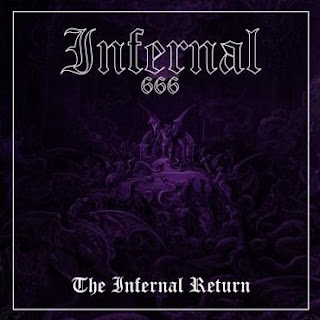 Eight years have passed since the Metal world has heard from David "Blackmoon" Parland or the band Infernal. Line-up problems caused the band to go on an indefinite hiatus, following the release of Summon Forth the Beast. By late 2008/early 2009, the inspiration to create was awakened and Infernal rose from its crypt. Former Necrophobic member Martin Halfdan was recruited, as well as ex-Dissection/Infernal/Dark Funeral drummer Tomas Asklund. Line-up problems, again, hindered the progress of this recording, but a new drummer was soon found and the songs were re-recorded for a proposed 7" E.P. released by Goathorned Productions. Despite the setbacks, Infernal pushed forward and The Infernal Return was released in May 2010.

It begins with a brief intro, "The Darkside Calls". From the very first moments, Parland's trademark guitar style is easily recognized, as the cold nocturnal riffs slowly rise from the depths of the abyss, like a fog over the darkened land.

The next song is "Of the Seven Gates", which begins with the blasting drums and freezing cold tremolo riffs that one would expect from the mastermind behind the early albums from Necrophobic and Dark Funeral. However, as the song progresses, there's an added dimension as there are also some vicious Thrash. David's vocals contrast with those of Themgoroth, from the first Infernal E.P. His style is deeper and more powerful, giving the song an old school Death Metal feeling. Later on, there's a great guitar solo that is as impressive as it was unexpected. It is definitely a nice touch and helps bring the song to life. The speed then picks up and yet another solo is unleashed. This one song really displays a decent amount of range, being quite dynamic and haunting at the same time.

"Godforsaken (With Hate I Burn)" is the final song, beginning with a mid-paced riff and featuring a brief yet epic solo, early on. Lyrically, this one conveys a dark feeling of solitude and doom. This track is fairly straight-forward and a bit less dynamic than the previous one, yet no less memorable.

The Infernal Return gives a decent overview of Parland's musical past, with an added sense of maturity. The only real complaint with this E.P. would have to be that it clocks in under ten minutes. With any luck, this will only be a small taste of what is to come. It's limited to 500 copies, so I'd recommend for you to get this as soon as possible.
Posted by Noctir at 10:39 PM