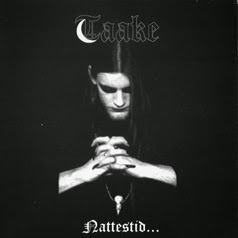 For well over a decade now, it has been nearly impossible to not be confronted by the overrated and over-hyped entity known as Taake. One of the latecomers to the Norwegian scene, this band's first full-length was not released until 1999. Nattestid... is a very tedious listen and one that offers very little reward.

The first things that once notices when listening to this is the horrid production. Or, rather, it is seems that it had a clearer production and then some sort of trickery was involved, after the fact. In the end, what we have here is a tenth-generation dub of the original master tape, in an insincere attempt at sounding grim. The result is something that is just noisy and irritating, as certain frequencies are just grating to the ear. As is often problematic with modern releases, the drums and bass are too high in the mix and create a muddy feeling.

Musically, this is just a complete mess. There is far too much going on, and yet not enough really happening. The various layers do not seem to fit together very well. The drumming is just too much, with so many useless fills and tempo changes. The clean guitars that are added on top of the rest just make things more difficult to grasp. Then there are the disgusting clean vocals that kill any attempt at atmosphere. This really sounds like the result of a few kids making a poor attempt at picking up from where Emperor left off with Anthems..., along with some influences from Satyricon and early Aeternus. Regardless of what influenced this atrocity, they failed to really understand what Black Metal was supposed to be about, because this isn't it. Despite the aesthetics and techniques, this is the total opposite of dark or evil. Perhaps this is supposed to be some sort of Viking Metal or "Forest Metal"? At any rate, Taake failed to create anything worthwhile. Imagine an album like The Return... or Under A Funeral Moon that was drowning in clean guitars, over-audible bass lines, classical influenced melodies and clean wailing. It is very likely that Hoest and his pals were part of the later generation that were exposed to modern flower metal before ever hearing any real Black Metal.

Nattestid... is not a totally worthless album. The band are fairly competent at playing and Hoest's vocals are not bad at all. If you are into the 'pretty' and 'flowery' side of Metal, this will appeal to you. However, if you are seeking a solid offering of Norwegian Black Metal, you are in the wrong place. Turn away and flee.
Posted by Noctir at 11:13 PM 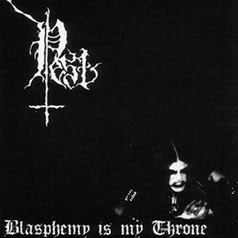 Sweden's Pest is an interesting band. They began doing a weak imitation of Darkthrone, among others. Over the course of their career, there have been some highs and lows, ultimately leading them to embrace an even more old school sound to which they are better suited. However, their early years were quite mediocre and this is exemplified by the 2002 E.P. Blasphemy is My Throne.

The songwriting here is incredibly weak. The compositions are too lengthy and they go absolutely nowhere. The title track has a couple of riffs that could have been useful, but ended up languishing amid several generic riffs that just go nowhere. These guys are just going through the motions, knowing which notes to play but not why they need to be played or how to put it all together. There is not an ounce of darkness to be found within these songs. "Along the Path of the Fallen" is another painfully generic track that meanders along for eight minutes and accomplishes nothing.

Side B is similarly frustrating. "Towards Desolation" features some half-decent tremolo melodies that are very reminiscent of early Burzum, but the modern studio production sort of kills the vibe. The song is then buried in an unmarked grave when things transition to a poor man's Ravishing Grimness. "Circle of Damnation's Fire" displays some of the worst Celtic Frost imitation ever heard.

Sometimes, a band should demonstrate a bit of patience and, rather than releasing material just for the sake of getting their name out there, they should hold off until they've written songs that are worth listening to. In the case of Blasphemy is My Throne, Pest seemed overeager to release something, despite the songwriting being utterly below-average and tedious to sit through. Some bands are slow starters and these guys really should have remained in the demo stage a lot longer, because this E.P. is completely worthless.
Posted by Noctir at 4:03 PM 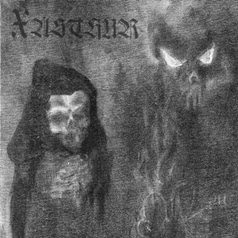 Nocturnal Poisoning was released in late 2002, marking the first of many disappointing full-lengths to come from Xasthur. Alongside trash like Nargaroth, this may be one of the most overrated bands to ever soil the realm of Black Metal.

After being introduced to this solo bedroom project with the track "May Your Void Become as Deep as My Hate" (which was fairly decent and Burzum-esque), I did a little research and decided to give a listen to the first Xasthur album. Of particular interest was that this offering featured a cover of an old Mütiilation track. It seemed as if this band might have some potential. I was quite wrong.
Nocturnal Poisoning is an incredibly tedious listen. To my understanding, this is a fairly clear example of DSBM, but the only depressive thing about this is how utterly boring and mundane it all is. From the first track, it is apparent that Malefic is incapable of doing even the most basic Black Metal vocals, as his voice is so drowned in digital effects that all chance for any feeling to be conveyed by the vocals has been eliminated. That is not too much of a problem, as the songwriting is amateurish and bland. In fact, one would be hard-pressed to even call this songwriting. It would be more appropriate to call this a collection of uninteresting, generic, interchangeable and forgettable riffs that stretches on for over an hour. The overuse of clean guitars in the forefront also does a lot to remove any possible edge this music could have possessed.

Malefic demonstrates that Burzum and Strid were not the only bands he wished to emulate, as "A Gate through Bloodstained Mirrors" gives off somewhat of an old Graveland vibe, particularly with the drum programming. Occasionally, a guitar passage will feel slightly gloomy, but there is nothing to compare it to other than the terribly monotonous and boring riffs that make up the bulk of this wretched album. There are no ups and downs, no journey into the darkness. The riffs have no feeling, the vocals are just a pathetic mess of sound effects and the tracks are all the worse for the fact that they just drag on and on.

The best and most offensive song on here is "Black Imperial Blood". The soft and modern production neuters it, for the most part, with the horrible fake drumming overpowering the guitars. Anyone with any respect for Mütiilation would never have released this atrocity, as it is a complete raping of the original. That said, these are clearly the most interesting riffs on the whole album. In this case, not only was it a bad idea to include the cover track because of how poorly it came out, but it also shows just how weak the rest of the compositions are by comparison.

Later songs introduce more synth into the mix, as if this filth wasn't horrible enough already. "A Walk Beyond Utter Blackness" introduces a somewhat average guitar riff, then proceeds to do nothing to capitalize on it, spoiling it further with random clean guitars and excessively loud bass lines. Finally, nearly an hour into the torture session, the first decent (original) riff appears. The title track starts out with a rather lifeless and sombre melody, but soon loses steam and turns into a terrible Opeth outtake.

Truly, Nocturnal Poisoning is a complete mess. Cover art and song titles aside, there is nothing even remotely dark about this. This guy really just picked up on the absolute weakest elements of Black Metal and failed in his attempt to emulate them, creating a disgusting and worthless string of albums and split releases over the years. It's a shame that so much talentless scum manages to gain notoriety and support for the complete trash they call music, while other bands go unnoticed or forgotten. You are far better off listening to the older works from Burzum, Strid and Mütiilation. Xasthur was never anything more than a failed effort at making a cheap imitation of those that came before. Avoid this.
Posted by Noctir at 8:34 PM