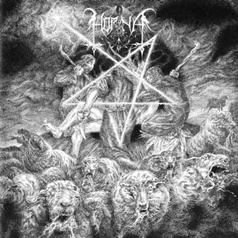 Originally available as a limited edition cassette, released in 2006, Kun synkkä ikuisuus avautuu somehow slipped under my radar for the past several years. Given the prolific output of this Finnish horde, it is certainly no surprise. Immediately upon hearing this compilation of demo material, recorded in 2000, it became clear that this was yet another essential Horna release. Thankfully, it has since been reissued on CD (and also on vinyl, I believe).

Kun synkkä ikuisuus avautuu features demo versions of songs that later appeared on Ordo Regnum Sathanas and the ill-fated Sudentaival L.P. While the former is not a bad release, and fits in rather well with the likes of Kohti Yhdeksän Nousua and Perimä Vihassa Ja Verikostossa, Sudentaival was an absolute abomination and the blackest mark on the face of Horna until the recent acquisition of their new Mansonite vocalist. The material on this release represents the pure, raw Black Metal spirit that Horna had kept alive for so long.

Whereas the album versions of several of these songs were utterly ruined by the completely plastic and modern production, the demo recordings present these songs in their true form. The quality is pretty lo-fi, to say the least, though not quite as rough as the Moonblood rehearsals. This is more along the lines of Emperor's Wrath of the Tyrant, in sound and atmosphere. Actually, it is most similar to Tyranny Returns, by Sargeist, probably even using the same equipment and location. The guitars are thin and possess a fair amount of fuzz, though still the dominant aspect of the tape as the drums are kept to the background. This is a massive improvement, of course, as the Sudentaival album was rendered worthless largely due to the over-produced drums that were so high in the mix as to drown out most of the other instruments.

The single most important element of Horna's sound, over the years, has been the brilliant songwriting of Shatraug. The grim and necro approach of Kun synkkä ikuisuus avautuu allows the guitar melodies to create a morose atmosphere of impenetrable gloom. Nazgul's vocals do well to match this, as he utilizes more tortured screams in songs like "Sudentaival". As opposed to his more forceful and aggressive delivery on the full-lengths, he took the opportunity to explore other parts of his vocal range on some of the other recordings, such as this one. These morbid cries accentuate the haunting melodies of songs like "Hautajaisyö" and "Vihasta Ja Arvista", almost as if the mournful riffs are draining the life from him. Without the overbearing dominance of the drums, as found on the 'proper' studio versions, the guitars take on a ghostly effect that envelopes the listener within each sombre passage.

Kun synkkä ikuisuus avautuu is highly recommended for fans of Horna or, indeed, those who are drawn to the more necro and lo-fi Black Metal of the early '90s. These demos allow for Shatraug's riff-craft to be truly appreciated, bereft of those foreign elements that ruined the more well-known versions. There is nothing polished, modern or easy-to-digest here. This is pure Black Metal, as it should be. Perhaps, with the exception of the folkish Isengard influence of "Skaldiriimu", which still fits in with the rest of the material, despite the bit of clean vocals. Seek this out or perish!
Posted by Noctir at 3:54 PM 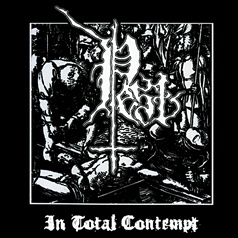 Not long after the fairly brilliant Dauðafærð, Sweden's Pest returned in disappointing fashion with the March 2005 release of their second full-length album, In Total Contempt. This is a clear case of one step forward, two steps back. Though still clearly derivative of other bands, the previous E.P. was superior to anything that the band had ever released. For a time, Pest had redeemed themselves. To then follow this with such a weak effort is a bit puzzling.

In Total Contempt sounds like it was recorded by an entirely different band than the one that created the monumental Dauðafærð E.P. Here, Pest returns to their tenth-rate Darkthrone worship, unleashing nearly forty minutes of rehashed ideas with absolutely nothing added to the formula. To make matters worse, they seem to have been listening to a lot of Panzerfaust when making this album, utilizing a watered-down take of Fenriz's interpretation of Celtic Frost, at various times. I would say that these bits are out of place and ruin the flow of the songs, but the truth is that these compositions are dreadful and seem to have just been thrown together with no real vision. As opposed to the band's previous release, there isn't a shred of darkness or atmosphere to be found on this album.

Even if the songwriting had been leagues better, the production would have remained a significant problem. Overall, it has a grating sense to it, something associated with a lot of modern recordings that are trying to sound lo-fi without actually sticking to analog equipment. The vocals have some static effect to them, just another horrible modern element that could have been done without.

Pest's second full-length is a tedious listen, indeed. To call In Total Contempt a mediocre effort would imply that these guys even tried in the first place. This album is pure garbage, through and through. The fact that they dedicated this disgusting piece of excrement to the recently-deceased Quorthon is an insult to the man. There isn't a single positive thing that I can say about this atrocity. Despite its influences, this album completely sounds like a product of its time and is nothing less than an utter failure. Avoid this, by all means.
Posted by Noctir at 5:21 PM 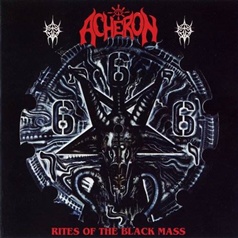 Released in April 1992, through Turbo Music, Rites of the Black Mass is the first full-length album from the American Death/Black Metal band, Acheron. Recorded in the wretched hellhole known as Morrisound, this album is still fairly decent and manages to stand out from many of its contemporaries. While the band was unable to maintain such consistency with its later output, their debut is well worth listening to.

I recall first hearing this album one night after watching some old horror movies with a friend. With visions of Vincent Price and the Tall Man still fresh in my head, Rites of the Black Mass suited the atmosphere, perfectly. Of the two albums that we checked out that night, the other being the disappointing Testimony of the Ancients from Pestilence, Acheron definitely stood out.

The album features twenty tracks, ten proper songs with intros in-between. Before each song is a guy reciting, what I assume to be, verses from the Satanic Bible that are accompanied by keyboards that give the whole thing the vibe of an old horror movie. For some, this might be a little distracting, but it does serve to create a darker atmosphere than the typical Death Metal album of the period. To that point, the fact that Acheron focused on Satanic themes rather than the usual gore lyrics that dominate this style of music is rather refreshing.

Musically, this has always reminded me of the first albums from Deicide and Incantation, to an extent. The former moreso because of Crowley's vocal performance, utilizing some higher-pitched overdubs in a similar manner to Glen Benton. The songwriting is pretty simplistic and even the faster tracks, like "To Thee We Confess" or "The Enochian" key are rather 'relaxed' when compared to the blastbeats of an album like Onward to Golgotha. One can definitely tell that these songs were written in '89/'90, as they still possess more of an old school approach. There are a lot of memorable mid-paced riffs throughout the album, such as in "Ave Satanas" and "Unholy Praises", often accentuated with great leads as well. At times, one is likely to be reminded of early Morbid Angel, regarding Slate's solos and some of the drumming as well. While being fairly basic, the compositions are all distinct and engaging and the album certainly delivers on all fronts. The production is a bit muddled and would probably have benefited from a sharper guitar tone, but such is par for the course when it comes to Morrisound.

When people speak of the classic Death Metal albums from this period, Acheron is rarely mentioned. That is quite unfortunate, as Rites of the Black Mass is one of the most solid efforts to emerge from the old days. Had it been recorded and released a year or two earlier, and distributed by a better label, it may have received more praise and attention. This album is highly recommended for those into old school, blackened Death Metal. Seek this out!
Posted by Noctir at 1:28 PM