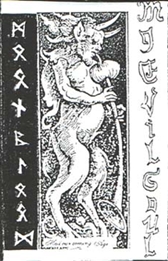 Upon first listen, someone unacquainted with Moonblood might mistake them for some run-of-the-mill Black Metal band, that pumped out a large number of demos and rehearsals and split albums in relative obscurity because they were not special of noteworthy. Taking something such as Rehearsal 1 - My Evil Soul, they may only make it through a few seconds of the hissing and raw sound before giving up and writing the band off. This would be a monumental mistake for anyone that truly wishes to experience something meaningful and memorable within the realm of music. While countless bands were springing up and merely going through the motions to rip-off their heroes, Moonblood were at work in the depths of the German underground, creating something unique and powerful.

The quality of this recording is not very good, to say the least. There is a lot of static and the music sounds as if it was being played in a garage while the tape recorder was placed outside, somewhere. At times, the guitars seem to resemble ocean waves more than recognizable riffs. It is apparent that there is a lot more going on with the drumming than one might initially think, judging by the moments when things get a bit clearer. The one constant is that the vocals manage to cut through the wall of sound, with a very raspy sound. After a little time, it is possible to focus in on what is happening and to train your ear to follow along. However, this can be a little tiring, on occasion. This is the type of thing that one must really concentrate on, rather than to casually listen as background music. I rarely advocate passive listening anyway, but such a thing is nearly impossible here.

It is sometimes shocking to think about Moonblood's musical output, considering how many songs they wrote during their all-too-brief career versus how many actually made it onto proper recordings. Even if one counts the demos as official releases, there are still a great number of songs that were left behind, so to say. In the case of Rehearsal 1 - My Evil Soul, the band offers up nearly an hour of material, with only one of these songs making it onto their first full-length album, Blut & Krieg. This is a real shame, in some cases. There is a sense of inconsistency with the songwriting, here and there, but then songs such as the title track and "The Awakening of the Serpent" are much more solid than a lot of the music that their contemporaries were releasing on so-called classic albums of the period. From the eerie tremolo riffs to the majestic and sparse solos and even the subtle keyboards, everything came together in just the right way. As well, the unsettling riff in the latter half of "Under the White Cold Snow" is similar to "Nosferatu", possessing a really otherworldly feeling. Moonblood was always a band capable of unleashing very haunting and memorable guitar melodies, as if it just came very easily for them. Despite the grim and necro character that many ascribe to them, this band was absolutely not one-dimensional or exceptionally primitive. The compositions were more dynamic and complex than most give them credit for, with use of acoustic passages and a mixture of fast tremolo riffs with more epic, mid-paced sections reminiscent of Bathory. Most importantly, there is a lot of atmosphere to be found on this recording. Perhaps, some of their peers used a shoddy sound and limited releases to hide their lack of skill, but this was not the case with Moonblood. While a lot of recordings from this era sound similar and possess sort of the same vibe, what Occulta Mors and Gaamalzagoth created here really takes the listener back in time, across the centuries. Not just because of the cold and barbaric sound, but the atmosphere of the various riffs and vocal patterns, this almost seems like something that should have existed a millennium earlier. It is this ability to remove the listener from the present day and to completely transcend this filthy modern age that demonstrates just how talented these guys were.

My Evil Soul is certainly worth listening to, and it is hard to figure out why so much of this material was forgotten and never used later. Had this band been able to get a better record label behind them and to get into the studio once a year, they would surely have been responsible for countless classic Black Metal albums and their name would be spoken in all circles whenever the most elite and talented bands were mentioned. The material on this rehearsal is dark and epic, capturing the true essence of Black Metal in a way that so few ever have. One way or another, seek this recording out and give it the time and attention that it deserves. The name of Moonblood is sacred for a reason, and herein lies the proof.
Posted by Noctir at 8:39 PM