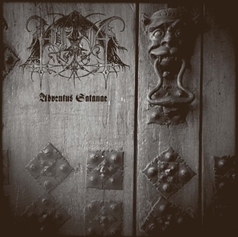 Released in late November 2011, the Adventus Satanae E.P. is the first sign of life from Horna in over two years. This marks the second recording with new vocalist Spellgoth, and yet one has to wonder why there has been such a break. Shatraug has long been known for being an incredibly creative musician, as the massive output of his bands can attest. It may be that he wished to focus on creating Sargeist's long-awaited third full-length, Let the Devil In, as well as giving the other members of Horna a well-earned break. With this mini-album, this Finnish band has returned to show that they have not missed a step, nor have they progressed into the 21st century. This is a recording with firm roots in the Black Metal sound of the 80s and early 90s.

Musically, one can immediately hear traces of the early Norwegian Black Metal sound that has long held a special place within the heart of Shatraug. Once citing Under A Funeral Moon as the definitive Black Metal album, it is no surprise that the two songs found on this E.P. bear some influence from Darkthrone's classic period. With that said, the trademark Horna sound is ever-present and is noticeable from the moment the title track blasts forth from the silence. The music is grim and primitive, as could be expected, keeping in line with the established traditions of the Second Wave. Spellgoth's vocals suit the band, perfectly, and he shows some variation by adding certain shouted parts that add a layer of depth. As the song progresses, some of the riffs betray a possible Mayhem influence, hearkening back to the days from 1988 to 1993 when the likes of Dead and Euronymous were at the forefront of this musical movement. The riffs show a mixture of tremolo picking and old school thrashing, as the drums pound away with barbaric wrath. This atmosphere of strife and unease carries over into "Mustan sydämeni laulu", the longer of the two tracks. With this song, the hints of Under A Funeral Moon are a little more pronounced, regarding some of the riffs in the first half of the song. Shatraug proves to be one of the more skilled and loyal followers of the Second Wave sound. Meanwhile, Spellgoth does well to follow Nazgul and Corvus, while setting himself apart from them. The second half of this song sounds like a tribute to Emperor, with a section that seems to be ripped right out of Wrath of the Tyrant, from the riffs to the necro vocals and percussion. All in all, this material is solid and memorable.

The production is as old school as it gets. The guitar tone is rough and has a nasty sound to it, while the vocals are drowned in reverb and the drumming keeps its appropriate place in the background. The focus is on the guitar riffs and that never changes throughout th course of the E.P. It is very reminiscent of the albums that were released two decades prior, themselves a product of wishing to go back to the sound of 1980s Black Metal. This is very primitive and filthy, just how it should be. As long as bands like Horna exist, the true spirit of Black Metal will persevere, despite the increasing waves of poser scum that infiltrate this form of music.

Adventus Satanae proves that Horna has not missed a step and is still one of the most reliable bands when looking for a continuing output of raw, old school Black Metal that upholds the traditions while also possessing a character of its own. You are well-advised to seek this out and pick it up as soon as possible and to not delay in doing so.
Posted by Noctir at 1:19 AM 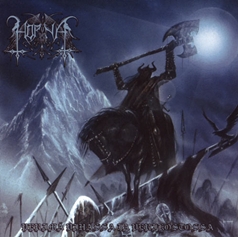 Horna is a band known for being exceedingly productive. Over the years, the number of mini-albums and split releases, filling the gaps between proper full-length recordings, has gone beyond the output of many bands with three times the tenure. The Perimä Vihassa Ja Verikostossa E.P. was one of the earliest such efforts, released by Oskorei Records in May 1999. This particular collection of songs came near the end of the band's first phase and is far superior to the L.P. that followed.

The early years of Horna saw a band that had not yet, fully, come into its own. While there is no doubting the high quality of their records, they were often highly derivative of some of their contemporaries or, more frequently, bearing a strong resemblance to the classic albums of the Norwegian Black Metal scene. Shatraug's songwriting bordered on genius, at times, but was still held back by conforming to the trends of the day (one example being the random use of clean vocals on the previous full-length). Only after finding his true musical voice through the outlet afforded to him by the early Sargeist material did he truly mature as a songwriter with his own unique style, somewhat that soon bled into Horna as well.

Perimä Vihassa Ja Verikostossa is a very solid release, and much preferable to the abomination that is Sudentaival. The spirit is still more Norwegian than Finnish, at times. One is reminded of bands such as early Emperor, Satyricon and Enslaved (especially on “Haudanusva”), throughout the five tracks that comprise this E.P. The use of keyboards, however minimal, only strengthens this effect. The songs are very dynamic, for the most part, with varying paces found in each composition. Shatraug's trademark style can be noticed, from time to time, though still mixed with Nordic influences. Despite this, the music that is presented here does well for itself, to such an extent that songs like “Verikammari” are still played live to this day. It may be the standout track, if nothing else than for the morbid feeling of doom that it conveys. From slow, creeping riffs to mid-paced sections reminiscent of old Bathory, to fast-paced parts that sound like something ripped from Transilvanian Hunger, this tune encapsulates the early period of Horna's career, very well. That is not to say that this E.P. is defined by this song, alone. Every one, from “A Ring to Rule” to “Ghash Inras” leaves its mark and all of them are quite memorable from the very first listen.

The production is not as over-the-top and slick as Sudentaival, yet it is nowhere near as grim as the typical sound of the band's later output. It is somewhat thick and full, with the guitars possessing a decent amount of power and serving as the true focus. Nazgul's vocals are a little buried, but not anywhere near as much as can be found on Hiidentorni, at times. The overall sound-quality is probably a bit more healthy than most of the band's other releases, in that turning the volume on high does not result in hours of ringing in one's ears, afterward.

This should please any Horna fan, and would not be a bad starting point for those only somewhat familiar with Finnish (or Norwegian, for that matter) Black Metal. If you can get your hands on Perimä Vihassa Ja Verikostossa, one way or another, do so. For those that ignore limited releases or only go for full-length records, you are definitely missing out. While many bands might phone it in for split releases and the like, Horna is nearly always consistent, regardless of the format. Buy with confidence.
Posted by Noctir at 11:37 PM