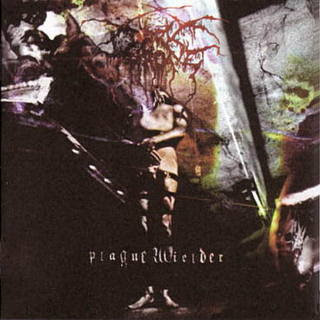 2001 was a dark period for real Black Metal. The trendy symphonic bands had claimed most of the attention from labels and fans alike and those bands that were attempting to keep true Black Metal alive were forced deeper underground. The truth of the matter is that most bands were trying to jump on the synth bandwagon and abandoning the core values of this music, while the few that did their best to keep the flame burning were doing a poor job. Nocturno Culto and Fenriz were in an odd position, by this point. They did not wish to join the masses, yet their own trademark sound had been stolen and the underground was being flooded with sub-par clones. Not quite ready to make a huge musical shift, and already reeling from the fact that the two previous records were not well-received, Darkthrone made a safe record that was not too similar to the early output yet contained no real signs of change of experimentation.

Plaguewielder is the ninth studio album from this Norwegian band and it is rather mediocre compared to most of their releases, though still being a few steps ahead of Total Death and Ravishing Grimness. Naturally, it does not compare with the "Unholy Trinity" of A Blaze In the Northern Sky, Under A Funeral Moon and Transilvanian Hunger. As a matter of fact, it isn't even up there with Panzerfaust, but it is the best of Darkthrone's mid-period and the last one to be recorded in this style before they began the major shift in sound.

The album begins with an intro that hearkens back to their first Black Metal record, soon followed by the type of sound that fans had come to expect from the band by then. The opening tremolo riff is accompanied by more of Fenriz's sloppy drumming, as seen on the previous album. Thankfully, he wakes up after a minute or so and the song sounds a bit more appropriate. The variation in the drumming adds a new dynamic, and may have been done for the sake of not sounding like the old stuff, but most would agree that the songs were clearly written to be faster. The same thing occurred on the last album, with Fenriz choosing drumming patterns that went against what Nocturno Culto had in mind for the songs. A slower section arrives, around the middle of the song, and doesn't do much to add to the atmosphere. While containing some of the better riffs on the album, "Weakling Avenger" is a little too long and needed the more primitive style of drumming that was present on the band's classic releases. It's not bad, but it could use improvement.

The next song is "Raining Murder", and it begins with another decent tremolo riff that is joined by some rather boring drum-work. After a minute, the drumming shifts and then compliments the guitar melodies a lot more. Unfortunately, there are some effects added to the song that only serve to create more noise and distract from the riffs. One cannot be certain, but it would really seem that, by this point, Nocturno Culto was doing his best to keep the band alive while Fenriz was rather apathetic and doing his best to create a feeling of mediocrity. He was clearly bored with the type of music that they had been making but wasn't ready to move forward yet. As the song progresses, there is a mid-paced section that actually fits in in rather well. As it nears its conclusion, the pace slows down even more, giving a feeling of dreariness and doom.

"Sin Origin" shifts gears and goes right into Hellhammer-mode, which somewhat kills the flow of the album. For one reason or another, most bands fail to remain interesting when they aim to rip off Hellhammer / Celtic Frost. While they succeeded in doing this on Panzerfaust, it simply isn't as good this time around. With the two previous songs containing slower and mid-paced sections, the last thing that was needed at this juncture was another plodding tune. The track is excessively long as well, though the ending riffs create an uneasy feeling and are a worthy addition to the record.

This is followed by "Command", which is another mid-paced song. It definitely would have benefited from being preceded by a faster and shorter track. Despite this, it is actually one of the more impressive songs on the album. The slower riffs are dismal while the fast sections do well to create a sense of tension and this is one of the few times where the dynamic range of the songwriting is actually a positive thing. This is one of the most impassioned vocal performances of Nocturno Culto's career. Everything slows down in the middle, leading to a new riff that introduces incredibly fierce screams that are absolutely inhuman. The drumming that follows is a clear sign that the punk vibes were always present in Darkthrone's music, just not as overt as they would be in later years. The song is repetitive at times, and could be slightly shorter, but is the best track on the album.

"I, Voidhanger" opens with some odds riffs and odd timing. About halfway through, the pace picks up and resembles something more normal for a Darkthrone record. Like most of the other tracks, this one sounds over-analyzed and goes on a little longer than it should.

Plaguewielder ends with "Wreak", which clocks in over nine minutes in length. It starts out with a catchy riff that soon transitions to something faster. The shift is a little unnatural and one gets the sense that the riffs were kind of thrown-together. The production of this album is not as raw as most fans would have liked, and that may have contributed to the negative impression that it left on many listeners. Much like the cover artwork, the production is too organic and lively. A cold, minimalist approach would have really suited these songs much better, as well as removing some of the unnecessary parts. The final song really drags until the four-minute mark, when a brilliant tremolo riff finally breaks free from the stagnation and reminds one of the glory of Transilvanian Hunger. Has this track been stripped down and only the best riffs left, along with a production job more similar to the Necrohell sound of the past, this would have turned out much better. The song plods along for another couple of minutes before the mournful tremolo melody returns, accompanied by the correct style of drumming, which creates a sorrowful atmosphere and also imbues the listener with a sense of disappointment, seeing how great this could have been.

Darkthrone's mid-period was a sad thing to behold. Total Death was completely neutered by the dull production job and the random song arrangements. Ravishing Grimness was killed by more awful production and incoherent songwriting (with the two members working against one another, rather than together). Plaguewielder was lambasted from the beginning for the colourful cover art alone, but the music is not as awful as many would claim it is, though it does clearly show that the band had no clue what exactly they wanted to do. It would appear that Fenriz was ready to move on to something else, while Nocturno Culto wanted to keep some connection with their old style. The Hellhammer influence was a little too noticeable on this album (as with the one before), though one could almost sense some inspiration from Burzum and even their own earlier works. While there are a few really good riffs and a couple decent songs, this record could have been so much more. It would take the band several more years to work out their creative problems and finally make the transition to what they are doing now, but the path was a painful one.

This is not recommended for anyone new to the band; however, die-hard Darkthrone fans should give it a listen and judge for themselves. If possible, adjust the stereo with the bass all the way down and the treble on high and it will nearly sound like it came from Necrohell. This isn't a great album, but it contains some good riffs that are worth hearing and it is certainly more enjoyable than some of their other offerings from this era.
Posted by Noctir at 8:08 PM