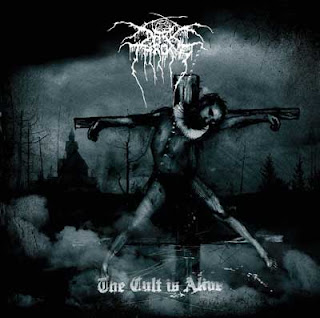 The Cult Is Alive is an important album for Darkthrone, as this marks the point where the truly stopped giving a damn what anyone thought, whatsoever... even their strongest fans. While Sardonic Wrath was extremely mediocre and continued the new direction that began on Hate Them, this one seemed to more fully embrace this new Punk attitude. Released in February 2006, this ushered in an era of disappointment for many Darkthrone followers.
The sound is still primitive and lo-fi, even overly simplistic in a lot of ways. It's quite underproduced, keeping with the traditional sound that the band is known for. There are a few decent riffs, littered throughout the album. There are even a couple nice solos. However, it's difficult to really enjoy much of this as there are far too many distractions. Nocturno Culto's vocals sound as if it's not even him, at all. In place of his trademark rasp is something almost laughable at times. He seems to be drawing a lot of inspiration from Tom Warrior, which is ridiculous as this is a complete drop in quality. With that said, it's not all bad, but too much of it is that it leaves a bad impression.
Regarding the lyrics, what can be said? Fenriz really lost it, years earlier. He managed to change his style and still keep within the realm of adequacy, for a few albums; however, the terrible shift toward outright parody that began on Hate Them has come to fruition on this album. The lyrics are so bloody bad that you want to reach into the speakers and strangle Fenriz for writing such trash. It's bad enough that the music is so uninspired, but this only adds to the problem.
The Cult Is Alive is not a terrible album. It's just not what you want to hear from Darkthrone... at all. It's fine for tossing in if you want some half-decent background music and you happen to appreciate old school Metal and even some Punk. Nonetheless, chances are, you'll only stop and pay attention to the music for the occasional good riff or solo. It's not something to sit and really focus on. Really, you can't pay too close attention to it, since the lyrics are so stupid that you'll want to take the CD out and destroy it with a hammer. At least the band never sold out and began making over-produced pseudo-Black Metal, in some attempt to get music videos on television and so on. And, to think about it, they almost had to reinvent themselves if they wanted to remain 'unique' or to stand out from the rest. Had they continued putting out solid Black Metal albums, with the thousands of clone bands out there, they would take the chance of getting lost in the shuffle. At least, this way, they remained relevant, in some manner. Even if it's someone like me speaking poorly of them, they still managed to maintain a bit of notoriety, albeit negative. As the old saying goes, any publicity is good publicity.
At any rate, despite the few good riffs, this is about as low as it gets, when it comes to Darkthrone. The only reason I'd recommend buying this is if you're wanting to complete the bonfire that includes Total Death, Ravishing Grimness, Sardonic Wrath, etc. There are worse albums out there, but that's no reason to waste your time on this.
Posted by Noctir at 2:50 PM