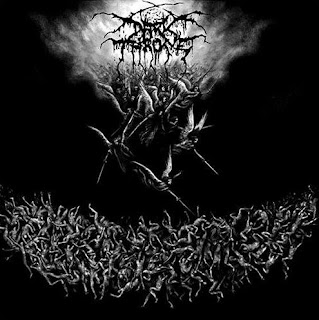 I remember that it was a cold autumn day in November, when I went into Sound Pollution (in Gamla Stan) and checked out the new Darkthrone album. It had come out a couple months earlier, but I had not bothered to listen yet, despite looking forward to it. I had some reservations, assuming that I might be let down. For some reason, I was still hoping for more of a regression to the classics of old, though I finally gave up on such a notion, around this time. Sardonic Wrath was their final release for Moonfog Productions, which pleased many fans. It follows pretty closely to the sound and style found on Hate Them, though not as successfully. This would mark the last time that I anticipated a Darkthrone album in such a manner. However, it's not as if I'd invested too much in it, since I didn't even pay for it; rather, I traded a CD player to my friend working the register. Released in September 2004, Sardonic Wrath truly belongs to the middle/transition period of Darkthrone.
After a worthless intro, "Information Wants To Be Syndicated" starts the album out, properly. It blasts forth at hyperspeed, with a very nasty and primitive sound. On the surface, it appears to deliver everything that fans claim to want out of this band. Yet, somehow, it's not enough. The bass is too loud, the riff is mediocre and the whole thing seems a bit sloppy and below-average for Darkthrone. Things come together a bit, later in the song, as it slows down. Still, it doesn't seem strong enough to lead off the album.
"Sjakk Matt Jesu Krist" is next, with the obligatory Hellhammer worship. There's not much to say about this song; it's fast, without really being fast, and has kind of an upbeat feeling. This is the kind of stuff that might be alright for background music, but it doesn't hold up under close scrutiny. In other words, it fails to impress.
The next song is a good example of a problem that has gotten worse over time: Fenriz's lyrics. "Straightening Sharks in Heaven" is an awful song title, for any type of Metal. For Black Metal, it's beyond ridiculous. But it's not just the poor song titles; Fenriz seemed to lose whatever skill he had for writing lyrics long ago. Actually, his creative bankruptcy should have been obvious when they got others to write the lyrics for Total Death. After that, he changed his style and wasn't too terrible, but on Hate Them and Sardonic Wrath, it began to cross the line. It would only get worse with time. As for the music, this song is one of the better ones. However, that's not saying much. There are several interesting riffs, though they don't seem to be constructed as well as they could have been. The ending has a nice, morbid feeling, which leaves you with a good impression.
"Alle Gegen Alle" is more filler. It's simply there, adding nothing to the album. It's not bad, but it's not good either. It's weak, plodding and easily forgettable. At least "Man Tenker Sitt" has the usual Celtic Frost feeling to get your head banging, or to get you drumming on the nearest surface. It seems poised to become more interesting as it goes along, but never quite makes it. Either way, it looks pretty good compared to its boring predecessor.
The next song is one of the more interesting ones on here, though it seems really out of place. "Sacrificing to the God of Doubt" is another song with an upbeat feeling, in the early moments, being quite catchy. After a minute or so, the pace slows down and the feeling is completely morbid and suitable for a Darkthrone album. This cold riff is one of the best of the album. The song is very memorable and would have been more fitting to start out the album, despite the strange feeling of the opening/closing riff.
"Hate is the Law" sounds very similar to "Inn I de Dype Skogers Favn", being fast-paced and creating a trance-like effect. Nocturno Culto sounds consumed with hatred at this point. One might expect this to be a sae track, until the Punk-sounding part. In retrospect, this was probably the band stretching their boundaries again, before really going all out. In the end, it's another average song. I could take it or leave it.
Finally, the album ends with "Rawness Obsolete". I have a theory that this song was added after the initial recording session, probably due to the brevity of the album. For one, the lyrics are absent from the booklet (in a similar case to "Hans Siste Vinter", from Panzerfaust), as well as the fact that the sound is a little different from the rest of the record. It seems a bit more organic and the bass is more distorted. This track is very reminiscent of "The Dance of Eternal Shadows", from Under A Funeral Moon. It has the same morbid, funereal atmosphere. This one song is the best one on the whole album, in my opinion, and it's the primary reason I've kept this one as part of my collection.
Overall, this was a disappointing release. There should be more than two and a half songs to hold my interest. Honestly, even those pale in comparison to even the weakest songs from earlier albums. Sardonic Wrath marked the point where I stopped caring what this band did. In a way, that was a good thing. They managed to win me back with Dark Thrones and Black Flags, but it took quite a while. As for this, it's not very good and is only recommended to fans who wish to complete their collection.
Posted by Noctir at 6:12 PM