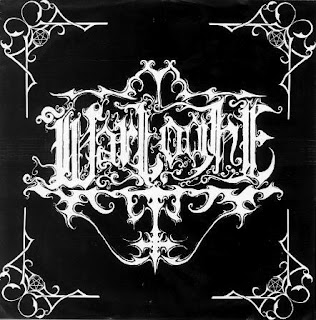 Warloghe is a lesser-known Finnish Black Metal band, existing since 1995. Their first E.P., Unlighted, was released in 1997 on Demonion Productions. Listening to this, one almost gets the sense that this band is like a distant relative of the French Black Legions, as they create the same type of atmosphere.

The first song is "Waaslandia", which displays some influence from Vlad Tepes, from the opening moments. The main riff is mid-paced, interspersed with tremolo melodies. After a couple of minutes, things speed up to where one would expect and the sound is slightly reminiscent of Black Funeral's second album, Empire of Blood. This is especially true of the vocals. The playing is a little sloppy, at times, but not to the extent that it distracts from what is going on. The music does well to create imagery of ruined castles, desolate forests and vampiric evil reaching from beyond the grave.

"Foretold Vast Sorceries Unfold" gets off to a shaky start, as the drumming is a little awkward and the song appears to be moving at an inconsistent speed. Once the pace picks up, things smooth out. Though this recording possesses a very raw and underproduced sound, it never breaks down into pure noise. It is very easy to follow the melodies and to hear what is going on. During this song, the vocals hearken back to the early Mütiilation demos, to a degree. There is a sense of desperation in Glaurung's voice that aids the gloomy atmosphere of the song.

Quite short and not terribly original, Unlighted is still worth tracking down for fans of the aforementioned French Black Metal bands. Warloghe really sounds nothing like most of their Finnish peers, though many of them came later anyway. This is far more in line with the LLN bands and even stuff like Moonblood rather than looking to Norway for inspiration.
Posted by Noctir at 1:00 AM