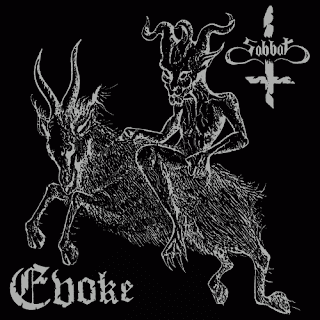 Evoke, the second full-length album from Sabbat, was released through Evil Records in March 1992. This came, roughly, around the same time as Darkthrone's A Blaze in the Northern Sky and Burzum's self-titled debut. Had the band hailed from somewhere in northern Europe, rather than Japan, perhaps they would have made a bigger mark in the underground. However, geography was not the only thing that separated Sabbat from the growing Norwegian scene. Evoke is an album born, purely, from the First Wave attitude and influences. It would not be incorrect to view it as an extension of that which began with the early work of Venom. As such, no matter how dark the atmosphere might get, it still lacks the all-consuming evil of an L.P. like De Mysteriis Dom Sathanas, for example.

The material on Sabbat's sophomore effort is not much different from Envenom. The songwriting displays a strong inspiration from bands such as Venom and Mercyful Fate. The latter is evident in nearly every song on the album. Many of the riffs and drumming patterns would not be out of place on classics like Melissa or Don't Break the Oath. The intensity level of some tracks seems to have increased from the previous album, with "Torment in the Pentagram" being a good example. This may be why some less-informed listeners have, mistakenly, called this Death Metal. Only one or two riffs could be thought to deserve such a label, and only by those that choose to ignore the overwhelming amount of Black / Thrash that characterizes not only this L.P. but this band, in general. There are hints of NWOBHM, such as "The Curse of Phraoh", which makes a lot of sense when one looks back on the band's previous output. The one strange addition is "Metalucifer and Evilucifer", which features several riffs that sound like something from a Testament album. For the most part, this release opts for a more straightforward approach, which even includes the guitar solos. Gezol utilizes a variety of vocal styles, from a deeper (yet still kind of raspy) sound to odd whispers to some horrible shrieks that may be an attempt to emulate King Diamond.

Overall, the music is very much in line with what one would expect from Sabbat, though it seems to be missing something. The thing is that, as good as the album is, it kind of falls short of attaining the same level as its predecessor. This is more evident by the inclusion of "Mion's Hill" as a bonus track, taken from the 1990 Sabbatical Demon demo. This single song overshadows everything else on Evoke, and draws attention to the fact that the rest of the tracks lack the same kind of epic atmosphere that is found here. That is not to say that this represents a drastic departure from Envenom, only that this possesses a little less of some of the things that made that album so impressive.

The production is much the same as before, though a little clearer. That being said, this record still sounds as if it could have been released in the mid-to-late '80s. The guitar is the dominant element, though the vocals are prominent as well, while never detracting from the riffs. The drums are loud enough to serve their purpose, but possess a dry and flat sound that enables the percussion to remain more of a background aspect. The bass is audible, to an extent, though more in the sense of an ever-present and ominous rumble. This adds another layer of filth to the sound, which suits the primitive music.

Evoke is a very good album and is recommended to any fan of Sabbat, or Black / Thrash in general. While Sabbat was unable to top their previous work, this L.P. still reaches a level of quality that most bands fail to even come close to. Pick this up if you have not already done so, but only after obtaining Envenom, which is the more essential of the two.
Posted by Noctir at 1:11 AM