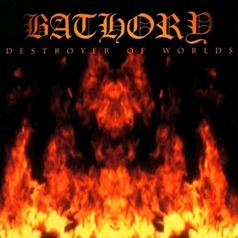 The story of Bathory is one with many twists and turns. From the early period, inspired by hardcore punk and the likes of Motörhead and Venom, on through the more epic Viking-era and then to the strange midlife crisis that characterized the band's mid-'90s output, Quorthon created a musical legacy like no other. And so, six years after the last Bathory full-length, the band released its tenth L.P. Titled Destroyer of Worlds, this record had a lot to live up to. According to interviews, the original material was a bit progressive and ended up being totally scrapped as, once word that a new Bathory album was spread, Quorthon received a lot of fan mail that indicated that what the fans wanted was a return to earlier styles. As the story goes, the band hastily wrote new songs, based on this feedback, and this is what was released to the world in October 2001. Unfortunately, if this is true, it would mean that the only fans that cared enough to write were those with bad taste, as the end result is completely disappointing.

The record begins on somewhat of a positive note, with three tracks that hearken back to the Nordic style that was featured on classic albums such as Hammerheart and even Blood On Ice. “Lake of Fire”, “Destroyer of Worlds” and “Ode” are mid-paced songs that possess an epic feeling that would surely be pleasing to fans of the band's Viking-era. Everything is there, from the acoustic bits to the choir vocals to the memorable guitar melodies. The first and third songs would not have been out of place on Twilight of the Gods, for example. The title track fits in, somewhat, but is the weak link of these three, being a bit repetitive and less-inspired. “Ode” has the most feeling behind it, with Quorthon's vocals really conveying a sombre mood not heard since “Fade Away”, from his second solo effort. Had Destroyer of Worlds been an E.P. That featured only these songs, then it would have been a much more successful endeavour. However, these tracks are followed up by material that is not worthy of the Bathory name.

It is difficult to comprehend the mentality behind the rest of the songs. The music does not encapsulate the band's entire career, as it merely touches upon the Viking sound and then meanders through a miserable hell of garbage that is reminiscent of Octagon. It is a mixture of bad Thrash with a lot of unbearable groove nonsense. There are occasional moments where Quorthon obviously tried tying things together with a choir or acoustic part, here or there, but it does nothing to salvage this filth. The thing that makes this so depressing is that he has always been such a talented musician and songwriter, yet sometimes churns out ridiculous trash for his own amusement, possibly. As a longtime Bathory fan, it is truly disturbing to even attempt to listen to the rest of this and it is strongly recommended that no one does so, unless you wish to punish yourself. The production is rather shoddy, but not so terrible. It is not bad in the same sense as the early albums, where it actually adds some rawness to the atmosphere. It just sounds muffled and flat, throughout the majority of the recording. It tends to hold back the few good songs, just slightly, while making the rest all the more atrocious.

If you consider yourself to be a die-hard Bathory fan, find some way to acquire “Lake of Fire” and “Ode”, and then forget that the rest even exist. You will forever regret it, if you decide to let curiosity get the better of you and try exploring the rest of the album. It is one of the most bloody awful things to happen within the realm of Metal and truly sickens and offends me as a loyal member of the Bathory Hordes. Avoid this like the plague, or like a hooker with oozing sores around her mouth. Destroyer of Worlds is a despicable blemish on Bathory's legacy and may have been the final nail in the coffin, if not for the brilliant Nordland releases. If this represents what the fans wanted, then all those that wrote letters should be tracked down and massacred.
Posted by Noctir at 11:59 PM