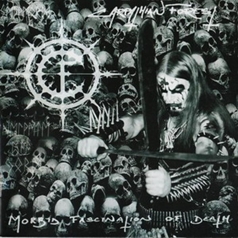 Morbid Fascination of Death is the third full-length album from Carpathian Forest, released on Avantgarde Music in 2001. This is the last record to feature both Nattefrost and Nordavind, as the latter would depart the band after this. Their final effort together sees their creation coming full circle, as this album seems to be the most natural successor to their 1995 mini-album, Through Chasm, Caves and Titan Woods. The music is much more straightforward, with only minimal experimentation. Sadly, even after removing most of the worst elements, the end result is still below-average and unimpressive.

The album begins with “Fever, Flame and Hell”, which is an odd intro track that features cheesy, horror-inspired synth. It really does not fit in very well, taking away from the overall impact of the rest of the material and getting things off to a bad start. This is the sort of thing that one would expect from Rob Zombie, not a Norwegian Black Metal band.

The first real song is “Doomed to Walk the Earth as Slaves of the Living Dead”. The title may be ridiculously long, but this is one of the most memorable tunes ever recorded by Carpathian Forest. It does a good job of setting the tone for the rest of the record, while also making up for the nonsense that preceded it. The old school Celtic Frost-meets-Mayhem vibe is still present, as is the less serious vibe that characterizes a lot of this band's output.

With only a brief rest in-between, the title track bursts forth in a furious manner. This song is a lot faster and more intense than the last one. There is not a lot of variation on display, but that is probably a good thing as it offers less opportunities for the band to play around and ruin a good thing. “Morbid Fascination of Death” gets right to the point, bludgeons all in sight and then vanishes as quickly as it appeared.

“Through Self-Mutilation” features more technical bits, with the riffs and drumming becoming a little overactive, at times. The band seems to be channeling later Immortal, during those brief moments at the beginning and end; however, the rest is more simplistic. This would be a rather average song, but the strange vocal effects, near the end, make it unbearable.

This is followed by “Knokkelmann”, which gets things back on track with a decent slab of old school Black Metal. Again, the primary influences seem to be Celtic Frost and Mayhem, which is not a bad thing. There is a thrashy part that could have been toned down, just due to how awkwardly it fits in, as well as unnecessary synth that does nothing to benefit the track. If Carpathian Forest had focused on the more primitive and nasty riffs, they might have accomplished much more.

“Warlord of Misanthropy” is filler, more or less, and is very much out of place on this album. Most of the riffs would have been better suited for a modern Death Metal album, and it all comes off as very disorganized. Even the slower riffs are fairly worthless and do little to create any sort of feeling, whatsoever.

The next song is a very good example of how inconsistent and lost Nattefrost and Nordavind often were. “A World of Bones” starts out with a more Rock-based rhythm, early on, yet changes its identity a couple times. The middle section sees the pace slow down, as the band attempts something more atmosphere, only to abandon what little momentum they build up in order to throw in more random ideas to close the song out.

Following this abomination is one of the best songs on this album, “Carpathian Forest”. Unfortunately, it is merely a re-recording of a song that previously appeared on their debut E.P. This version is pretty faithful to the original, except that it is slightly less enjoyable due to the very minor differences in tempo and so on. Nattefrost's vocals are weaker and less sinister, as well. There was no reason to record this song again, other than to try resurrection the brief period when Carpathian Forest had a little bit of potential.

“Cold Comfort” is more of an experimental track, which would possess sort of a sombre vibe (with a melody reminiscent of the main theme from the 1980 horror film, 'Maniac'), but the atmosphere is ruined by what sounds like a saxophone. Whoever came up with this idea should be blinded with a railroad spike, as it kills what little chance this had of being decent, while also introducing yet another foreign element into the sub-genre.

“Speechless” is a similar track that utilizes only minimal guitars and synth, with whispered vocals, sounding more like an outro than anything else. At least, in this case, the approach is pretty consistent and there are no more ridiculous appearances by instruments that have no business being used by a Black Metal band.

Ending the album is a cover of an old Mayhem song, “Ghoul”. They pull it off rather well, maintaining the filthy, old school attitude of the original, just with better sound quality. In terms of songwriting and performance, this has to be the very best track on this record. The sad thing about that is the fact that another band wrote the song. Furthermore, the execution is not that great, just better than on the rest of the songs. It says a lot about your band when the songs you cover destroy your original material.

In the end, this is another disappointing release from a band that should have done so much better. The music is based in '80s Black Metal, mixed with Rock influences as well, but the songwriting is just so half-hearted. Only a few of the songs are worth listening to, more than once. For a band with such a good background and worthy inspirations, Carpathian Forest just never managed to live up to its potential. This is even worse when considering that Nattefrost is one of the most recognizable vocalists from the Norwegian scene, especially when he put forth his best effort. Morbid Fascination of Death is just another reason to hate this band, not for being terrible, but for not being anywhere near as good as they should have been.
Posted by Noctir at 12:35 AM