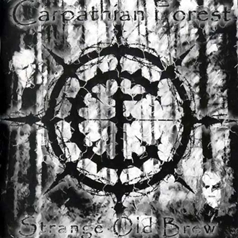 Strange Old Brew is a rotten album released by a band that was only ever consistent in their own inconsistency. With their sophomore effort, Carpathian Forest chose to explore the more experimental side of things, while also taking a more modern approach to songwriting. The end result is an L.P. that only contains a couple songs worth hearing, and even those are hardly what one would consider to be essential listening.

This record consists, primarily, of disorganized ideas and mediocre execution. The quality of the music represents a severe drop from the band's previous output, especially Through Chasm, Caves and Titan Woods. Half the album is meaningless filler. Out of eleven tracks, four of them easily recognized as garbage, right from the start. The ridiculous intro and outro, along with the two useless instrumentals, do absolutely nothing for the album and only serve to add to the feeling of disarray. Poor compositions like “Mask of the Slave” and “Martyr / Sacrificulum” show just how generic and uninspired Nattefrost and Nordavind were, when writing the material for Strange Old Brew. “Bloodcleansing” and “The Suicide Song” are a step above these, but still rather bland and forgetful. “Return of the Freezing Winds” is at the same level, though the stolen Celtic Frost riffs should count against it. It is pretty sad to think that most of the passable moments of this record have been heard before, countless times. The highlights of the album are “Thanatology” and “Cloak of Midnight”, which are both mid-paced tracks that convey a gloomy and sombre feeling. That said, standing out amongst refuse is hardly an achievement, and neither one comes close to matching the atmosphere of “Journey through the Cold Mists of Svarttjern”. None of the songs on this album give off the feeling that Carpathian Forest were really trying to do anything other than pump out another below-average album, in order to make a few dollars and keep their name out there.

This album was already a few years old, by the time I gave it a listen, and I made the mistake of trying to digest it alongside Black Shining Leather. I failed to really pay attention to the differences between them, and really did not give either a good deal of attention since I was much more impressed by their first E.P. When actually listening closely, Strange Old Brew is not only represents poorer songwriting, but the overall vibe of the record is kind of offensive. Production-wise, this sounds too modern, which seems to work against the very idea of ripping off old school ideas. It is not terribly overdone, but enough so that it affects the feel of the songs. The better tracks on here would have benefited from more of a grim and ugly sound, or perhaps something colder at least. Of course, they had very little connection to the true underground and most of their Norwegian peers had long ago abandoned the old ways.

Strange Old Brew is an album that should be avoided, as it will likely only succeed in lowering your opinion of Carpathian Forest. They were never the greatest Black Metal band around, in the first place, but this record is over 50% trash. The rest is either sub-par or barely average, which is not something that is worth your time, money or attention when considering how many genuinely good bands are waiting to be discovered. Already, at such an early stage in their existence, it seems this band lost what little creativity that they once possessed.
Posted by Noctir at 1:21 AM