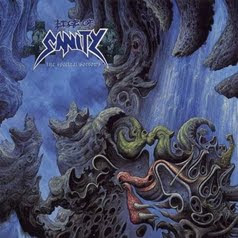 Dan Swanö has created quite a musical legacy in the underground, over the past couple of decades, and it all goes back to Edge of Sanity. While not as well-known as some other Swedish Death Metal bands, such as Entombed, Dismember and Grave, Edge of Sanity still released some quality material in the early-'90s, before fading into mediocrity and then obscurity. The band's third studio effort, The Spectral Sorrows, was released in November 1993 and may be the true highlight of their discography.

This album eluded me for quite some time, not that I put that much effort into finding it. I had obtained the first Edge of Sanity album, Nothing But Death Remains, back in high school but it failed to make a great impression on me. It was a solid offering of old school Death Metal, yet it did not seem to draw me well enough to warrant seeking out more. Some years later, during my first visit to Sweden, I ran across Unorthodox and The Spectral Sorrows in a Stockholm record shop. The latter was, by far, the more impressive of the two and managed to spend a lot of time in my stereo, alongside Necrophobic's The Nocturnal Silence.

Recorded in Unisound / Hellspawn Studios, this was produced by Dan Swanö and shows that his skills are much more appropriate for Death Metal. Rather than the flimsy jobs given to Marduk and Dark Funeral, among others, this album has a strong production that suits the music quite well. It is odd to think that only two years separate this from the first record, as the sound quality has vastly improved. There are no random drops in volume and the instruments are quite clear and easy to follow, without being overdone and sterile. The guitar tone is fairly thick and heavy, capable of crushing your skull right in. The drums are a little lower in the mix than one might expect, at times, but this is a good thing and only serves to place more emphasis on the guitar riffs. The production also worked well to connect each song, remaining consistent enough for the varying material to be tied together, so to speak.

As for the songwriting, itself, there is a lot of variation present on The Spectral Sorrows. There is a solid foundation of old school Death Metal; however, Dan had worked with so many different bands that he was clearly becoming bored and it shows on this record. Though the core remains the same, this album is much more melodic than its predecessors, which can be heard in nearly every song. In most cases, this has to do with the guitar melodies, such as the tremolo riffs in "Darkday" and "The Masque". Even songs that seem more traditional and primitive progress to become more introspective and involved, such as the way "Livin' Hell" slows down and features riffs that are more akin to Doom than Death Metal. This continues on tracks like "Lost" and "Across the Fields of Forever", which are more slow-paced and expand on the sombre atmosphere touched on by other songs. "On the Other Side" takes this a step further with the inclusion of truly despondent clean vocals, near the end. Even the intro and outro carry a rather melancholy feeling. "Waiting to Die" feels a little generic, compared to the rest, but is still decent enough to earn its place among the rest. For the most part, this album does really well to mix all of these elements together in creating the band's masterpiece.

Unfortunately, there are some things that do not seem to fit in quite as well as the rest. They don't exactly drag the album down, all that much, but they may be a little difficult for some listeners to digest. The Manowar cover, "Blood of My Enemies", is done really well and is far more listenable than the original. Dan uses clean vocals for this song, which was probably the right choice once deciding to record it. Other than that, the song sort of fits in where it is, and doesn't possess an atmosphere that is really at odds with the surrounding songs. The song that is most shocking has to be "Sacrificed", which is a complete departure from Death Metal of any kind. This song sounds like Dan's tribute to Goth Rock like Sisters of Mercy or The Cure, and that is exactly what it sounds like. As crazy as it may sound, he pulls it off about as well as possible and it is atmospherically consistent with the rest of the album, as it maintains somewhat of a depressive feeling. "Feedin' the Charlatan" is probably the one tune that fits in the least, strangely enough, with terrible vocals by Andreas Axelsson (which is odd, considering that he did such a great job on Marduk's Dark Endless).

In the end, The Spectral Sorrows is a very solid album and is likely the best that Edge of Sanity ever recorded. There is a bit of experimentation, to be sure, but it is more than countered by the large amount of high quality material that is found here. It features a good balance, while not getting overly progressive as the band would later do. This is likely to appeal to fans of old school Swedish Death Metal just as much as to those that prefer a bit of a melodic edge to things. The dark and mournful atmosphere may even make this attractive to fans of Black and Doom Metal, and the multitude of memorable riffs will have you returning for countless repeat plays. This has easily stood the test of time and is far superior to most that have tried to follow suit with a similar style.
Posted by Noctir at 11:46 PM