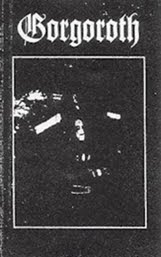 In April 1994, roughly one year after releasing their first demo, Gorgoroth decided to release a promo tape that included two new songs to be featured on their upcoming full-length, Pentagram. The band's sound had been streamlined, just a bit, from the earlier recording. Infernus, Hat and Goat Pervertor had also been joined by Samoth, of Emperor, during this time. The end product sounds more professional than the previous demo, though not nearly as good as the album that would follow.

The songs featured on here are "Katharinas Bortgang" and "Måneskyggens Slave". The latter is somewhat of an odd choice, in that Gorgoroth basically decided to ruin the surprise of the very best song of the upcoming album, six months early. Usually, it would be wise to save that for the full-length and to tease people with something else. Either way, this material must have increased the anticipation for the release of Pentagram, given the high quality of the songs. One of the main differences between this and the tracks on A Sorcery Written in Blood is the somewhat more melodic orientation of the songwriting. There are less old school '80s riffs thrown in, with more of a reliance on the hypnotic tremolo melodies. Both compositions are very dynamic, giving them somewhat of an epic atmosphere that was not present on the first demo. Another major shift is the change in the vocal department. Hat's voice has now become a much higher-pitched rasp, rather than the torn-throat shrieking of before. It flows a little better and suits the music, especially considering that he sounds to have better control over his breathing and a higher lung capacity, but it loses something in that his previous approach was just so utterly hateful that you could truly feel it.

Recorded in Grieghallen and produced by Pytten, the sound here is quite a bit better than A Sorcery Written in Blood. However, this does not represent the final mix that would be used on the full-length, thankfully. Though these are the same recordings that appear on the album, the overall sound is very different. Everything is kind of flat, as opposed to the fuller and more powerful sound of Pentagram. It is almost like the different between Transilvanian Hunger and De Mysteriis Dom Sathanas. This is good in that it shows improvement from the demo and gives a decent idea of what is to come, but it cannot compare to the finished versions.

Promo '94 was likely a useful release at the time, keeping the band's name out there during a time when so many classic albums were being released. However, it is rather useless now. These are the exact same recordings that are on the Gorgoroth's first full-length, just with an inferior mix, so there is not even the curiosity of hearing a different version of the songs, as with the demo. This is not even really recommended for die-hard fans, as it just offers so little. If you seek this out at all, find one a reissue that also contains the previous demo tracks.
Posted by Noctir at 11:05 PM