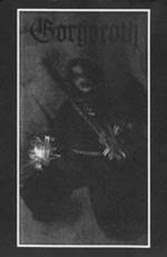 Gorgoroth's first demo, A Sorcery Written in Blood, is an absolutely savage and primitive piece of Norwegian Black Metal. Released in early 1993, this features two songs that would later appear on the band's debut full-length, Pentagram, yet these versions possess a completely different atmosphere. With this recording, you can almost smell the rotting blood that stains the altar of Gorgoroth.

Other than the chaotic and hellish intro, "Gathered at Blåkulla", this demo features only two songs, both of which were re-recorded for the first album. "Sexual Bloodgargling" is an earlier version of "Ritual", just with a worse title. This is joined by "(Under) the Pagan Megalith". Structurally, both songs are the same as the L.P. versions. As far as the songwriting goes, they were already in a completed form by 1993. However, as a result of the production and the execution, to some extent, this older recording sounds much more raw and hateful.

The first thing to mention has to be the vocals. Hat's vocal approach on this demo is nothing like the sound he would later adopt and is more reminiscent of Varg's work on the early Burzum albums, being more of a shriek. That said, the tone is less anguished than it is just utterly consumed with pure, cold hatred. The first time that I heard this, the vocals seemed like the real weak point of the demo. Nevertheless, after a few listens, it became clear that this much more primal sound suits the manner in which the music is presented, here.

The production is not the best, with some volume issues and the common problem of the drums being too loud in the mix, compared to the guitars. Still, somehow, the rougher production gives the music even more of an old school feel. In particular, "(Under) the Pagan Megalith" features some thrash parts, as well as riffs obviously inspired by Celtic Frost, near the end. The shoddy sound of this demo actually works well to accentuate this old school atmosphere moreso than on the full-length.

The playing does not seem to be as smooth as on Pentagram, at times, but this does not have a detrimental effect. It works in unison with the rough production and Hat's inhuman shrieking, creating a primitive atmosphere that is much uglier than what the band would go on to do. In some cases, when demo tracks are re-recorded for an album, in basically the same form, there is no need to hear the originals. That is not the case with A Sorcery Written in Blood. This demo is mandatory for any Gorgoroth fan and should be in the collection of anyone into Norwegian Black Metal.
Posted by Noctir at 11:27 PM